(Wil Cifer reviews the new album by the Belgian band Amenra, which will be released on October 20 by Neurot Recordings.)

Here is an album that reminds us distortion alone is only as heavy as the emotion being poured into the songs. This Belgium sludge band returns with another piece of despair. Gone is the Neurosis worship, which has been washed away from a more lush sound with thicker atmosphere. The emotional depth can be heard in anguished howls of the vocals. The layers of accompanying guitar have a droning sense of melody and carry an inner darkness.

The album opens with the brand of aggressive sludge you expect, with an almost hardcore-tinged anger. When this dies down the band float out into something more fragile and intimate with vocals sung in an almost androgynous Sigur Rós-like whisper, but then throw themselves back into the tormented screaming. One thing this album has going for it is the fact that the sung vocals are not used to create a MySpace Metal good cop/bad cop routine. Instead they build a dynamic in a less contrived fashion. 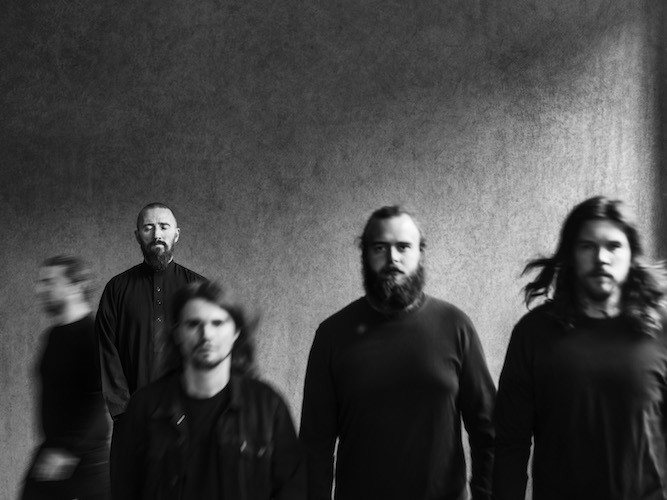 By the second song, the guitar takes on a tremolo feel and begins to blacken things slightly. The bass and drums keeps things at a more sludge-like pace.

The album benefits from stellar production (by Billy Anderson) making the overall sound huge. The pristine mix paints the album with a depth of shadows as it lends space to every instrument. Lightly sung, almost whispered vocals lead into “A Solitary Reign” . This escalates into more of a call and and response with the screams echoing the lighter vocals. When the song peaks into a crescendo the screaming takes over. In the song’s third act the vocals float over the sonic storm, in a way that reminds me of Alcest.

The album ends with the 11-minute “Diaken”. The storm clouds begin to converge upon the guitar’s brooding drone for the first two and a half minutes before they thunder down on you. Fans of this band’s previous work will like this track the most if they want to return to more familiar territory. The more subdued vocals do return and trade off with the more vicious screaming heading toward the song’s final moments.

I went into this album expecting more of the same old, same old husky vocals and dense, overdriven guitar and was met with a surprise. These guys got my attention again as this album is superbly crafted and finds the band hitting their stride.

Any band with a producer who knows how to put them on the bandwagon can achieve certain sounds, but writing songs that you can effortlessly listen to on repeat for an afternoon is a much smaller margin these days. Holding my attention for multiple listens can be difficult, considering I have so much music crowding my inbox. So the highest compliment I can give an album is to say that this band accomplished that admirable feat.

If you find yourself growing tired of your old sludge albums and looking for something a little different, you would not regret giving this album a chance.