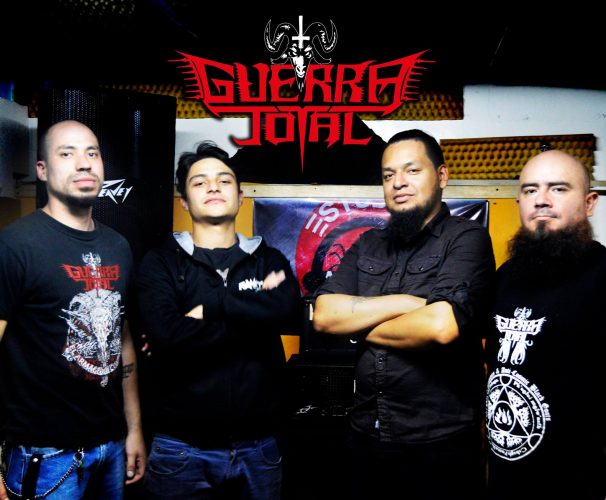 Guerra Total means Total War in Spanish and it comes right from the country with the longest armed conflict in the world, Colombia. I decided it was time for me to interview a South American band because they do get limited publicity and deserve any kind of support one can give. Besides, I do know of many who appreciate the South American thrash sound and I think for many of them and all others who are into exploring new things it may be interesting to listen to some Blackened Thrash with a Colombian twist like the one Guerra Total offers.

When it comes to South America, Brazil is the country with the most successful, renowned metal bands. But for those who really like Brutal Death Metal, Colombia is the country to choose. The Brutal Death scene is kind of modern, taking into account that the country’s raw and violent metal sound can be traced back to the ’80s.

Colombia has a Black Metal history actually. It even has, as many other countries, its own metalhead who sent letters and tape-traded with Euronymous. Because of this, myths were created. This mythical metalhead called Bull Metal was the same guy who came with the Dawn of the Black Hearts bootleg, the one with a dead Dead on the cover. The bootleg was printed in Colombia originally.

The main question was how much did the Colombian metal sound influence the early Norwegian Black Metal scene? Everyone wondered if it was true until in a VICE documentary from 2016, Manheim from Mayhem admitted that he had been influenced by the Colombian rawness. But I guess the influence stops there, with Deathcrush if anything.

I guess the most sound opinion I’ve heard when it comes to influences was something Nocturno Culto said in Bergen some years ago. He basically said that every Norwegian BM band has its own influences — not everyone was listening to Bathory back then, it’s pretty much an individual thing, and the influences may come from many different bands (including some raw band from the ’80s wartorn Medellin) and a bunch of other stuff, probably stuff we wouldn’t believe the musicians were listening to back in those days.

(If you want a lengthy explanation about all things surrounding the Colombian proto Black Metal myth, there is no better post than this one here.)

So after a tiny BM Metal history lesson we go back to what the post is really about, the interview with Gerson Toro, “Demonslaught” from Guerra Total: 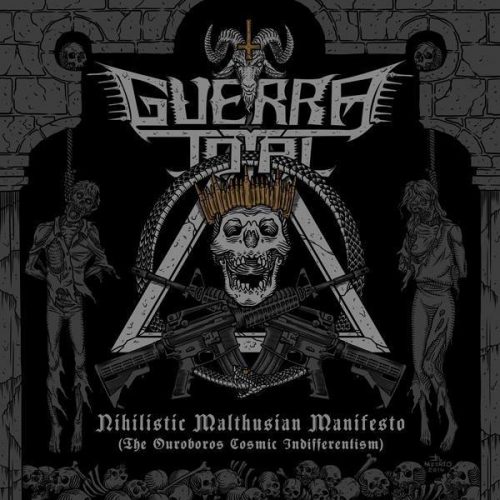 When did you guys create the band and what were you aiming at with it?

Guerra Total started back in 1997 under the name Eternal Drak. It was just a way to express our philosophical beliefs through the musical genre that we feel the most passion for.

In which ways has the South American old school sound influenced you?

It has not influenced us much when it comes to composing, but a lot when it comes to how we sound. The South American sound is raw and powerful but with a structure in it. We do let other genres that have nothing to do with metal influence us as well. We like both Sarcofago and Vulcano a lot, but we do also appreciate Johnny Cash or Neil Diamond. In spite of several influences we do try our best to create a sound of our own.

It is a fact that the Brutal Death Metal scene is the one that gets the most attention abroad, but ironically other more commercial metal sub-genres get greater support in Colombia. Is it the same with you?

Yeah, it’s the same. Guerra Total has gotten much more support from Europe or Asia than in Colombia. I think people abroad appreciate the raw and heavy sound we have here. But here in South America we have thousands of new bands that follow the most modern trends, others that stick to the old sound. Some are professional, some are not. Regardless of any differences I think we are all united in the passion and love for metal we feel, and that surfaces through the music and makes us special.

In which ways has the Colombian reality influenced you when it comes to lyrics or image?

I think the Colombian reality is just the same reality of this world. The reality of all human beings through time. What really influences me is the way I see humankind. I do write according to my mood and it is about what I read. Colombian things like war, drugs, social or political issues do not influence me at all. I do write about philosophical atheism, existentialism, nihilism, and cosmicism.

What are the advantages or disadvantages of producing extreme music in South America?

Well not many, but at least we do have the freedom to express anything we like here without any censorship whatsoever. But all in all, it is mainly disadvantages when you are born in a third world country, but we do our outmost with what we have nonetheless.

What are your future plans and what are you doing for them to come to fruition?

We are finishing the recording of our 8th album and we are contacting labels to release it at the moment. We are writing one more album at the same time and looking for some tour dates. I really hope it turns out well.

A new song from the next Guerra Total album…

Which unknown extreme bands from SA would you like to recommend us?

I don’t know if they are known or not but I do like them: Ammit, Unaussprechlichen Kulten, Cobra (Per), Communion, Holocausto, Infernal, Luciferian, Nameless, Asesinos del pentagrama, GoatSemen.

What do you think about the new trends in Black Metal?

Everything is welcomed as long as it doesn’t have to do with politics or it is unblack (Christian metal with BM sound). I think music has its own dynamic and it can’t be stuck in the same place. It must flow like a river.