I usually don’t read extended comment threads on the internet, unless they appear on this site, because it’s like walking at night through a park littered with dog turds where the owners didn’t have the common courtesy to put them in flaming bags. But I read a few yesterday on Morbid Angel’s announcement. 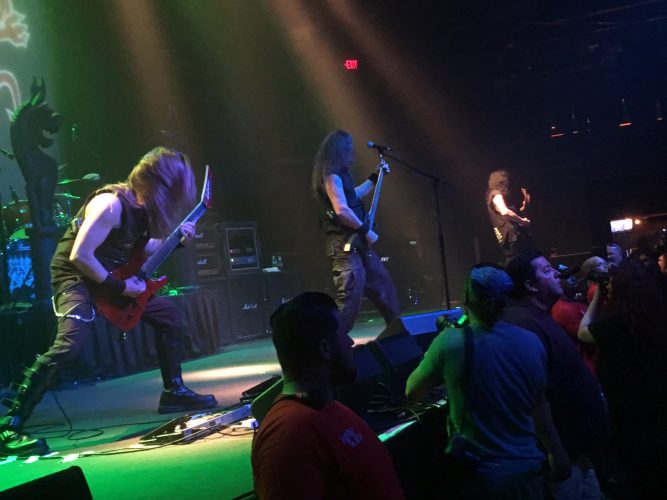 MA at MDF, photo by me

Some complained that, as is now abundantly apparent, the band treated their 12″ Juvenilia release on Record Store Day in 2015 as taking up the “J” space in their alphabetized catalogue. As if they owed something more than a rough live recording from their halcyon days (1989) before sacrificing a letter. Others were oblivious to Juvenilia (perhaps not surprisingly, given its limited release) and bitched that the band had skipped a letter. And did they skip the letter “E” or didn’t they?

Still others quarreled over whether the cover art is “too modern”, too “digitized”, and whether the logo should have been rendered in white instead of black. More continued to whine about Illud Divinum Insanus; an equal number proclaimed that we will surely have a return to honest-to-god (or satan) death metal with Steve Tucker back behind the mic. Many simply pleaded, “Don’t fuck this up!”

I felt like I’d fallen all the way down into the Mariana Trench of metal nerd-dom.

I can confidently predict only two things, because my crystal ball is clear: Kingdoms Disdained won’t suck (though it may not be great either), and it will sell a bazillion copies. I say it won’t suck on the strength of the song “Warped“, which the band played live on their recent U.S. tour (and at this year’s Maryland Deathfest, where I heard it), coupled with Tucker’s comment that, “I’m a death metal guy, so, for me, it’s gonna be a death metal album,” plus they recorded it with Erik Rutan.

And it will sell a bazillion copies, because duh, of course it will.

An beyond that, let’s just wait and see, shall we? Also, I think the cover art is great — though no one in the Morbid Angel camp has yet seen fit to identify the artist. A Facebook friend remarked that it looks like a rendering of the Balrog, and so it does. Tolkein-themed Morbid Angel album on the way?

More details: This is the band’s first recording with drummer Scott Fuller (Annihilated, ex-Abysmal Dawn), who joined the band last year following the departure of Tim Yeung, as well as new second guitarist Dan Vadim Von (guitarist/frontman of the American death metal band Vadimvon). The album will be released on December 1.

P.S. Just moments before I was ready to post this article I discovered that what appears to be a new song from the album has popped up on YouTube, one named “Piles of Little Arms“. So I’m including it below, even though I haven’t yet listened to it. I gather that it’s death metal. 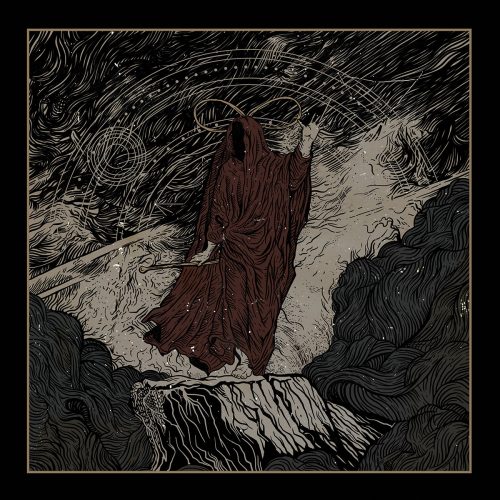 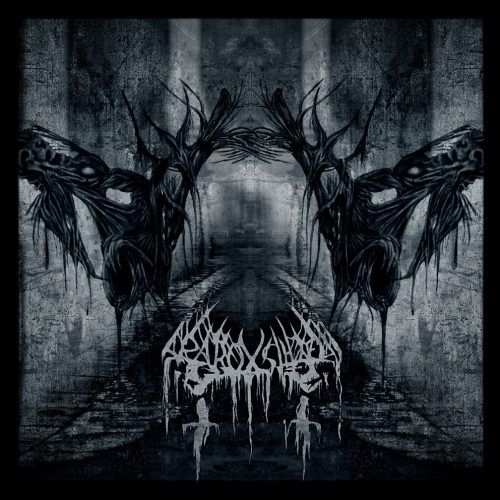 This next news item caught my attention because it involves two Canadian bands that I happen to like… a lot.

The news is that the French label Krucyator Productions is re-issuing the debut albums of Vancouver-based Auroch and Toronto-based Paroxsihzem. Both of the reissues will capture the music on pro-tape cassettes for the first time, with a release date of November 2. Auroch’s 2012 debut was entitled From Forgotten Worlds, while Paroxsihzem’s 2010 debut was self-titled. Both are excellent.

For purchase info, check the links below — and if you haven’t yet heard these two albums, I’ll make it easy for you. 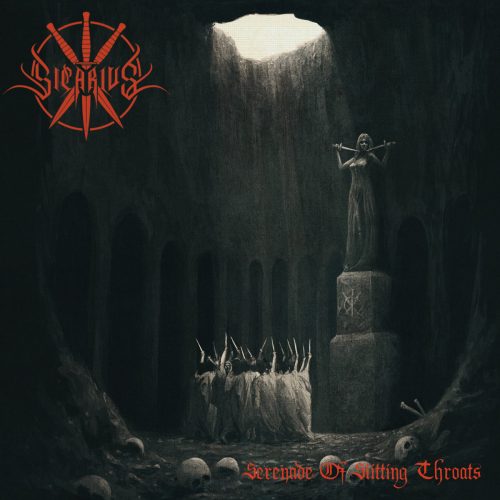 Now I’ll turn to the new music I selected for this round-up, beginning with a track felicitously named “Serenade of Slitting Throats“, which is pretty much what the music sounds like.

It comes from an album of the same name by the southern California black metal band Sicarius, which will be released by M-Theory Audio on October 13th (a Friday), and was first presented as a lyric video (directed by David Thelen) at the end of August. The album was produced by Mick Kenney and includes cover art created by Misanthropic Art.

If you want a pure overpowering firestorm of slaughtering black metal ferocity, this will fix you up. To mix my metaphors, it strikes with cyclonic force and has the electrifying effect of one lightning strike after another. The vocals are wild, the drummer is a maniac, and the music has huge low-end power. And while the riffing is, as noted, thoroughly savage, the song turns out to be a dynamic one, and ends on a surprising note. 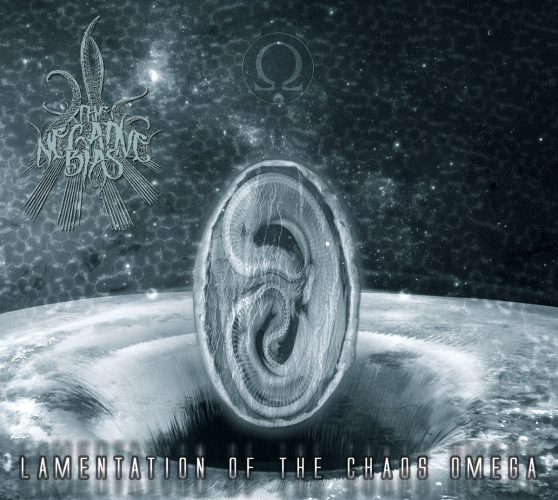 December 1 is the date chosen by ATMF for release of the debut album by The Negative Bias, which is called Lamentation of the Chaos Omega. This Austrian black metal band consists of I.F.S. (ex-Alastor) and S.T. (Golden Dawn), with studio drums performed by Florian Musil. The song below is “The Golden Key To A Pandemonium Kingdom“, which is essentially the key I search for in most of my listening.

There are certainly aspects of pandemonium in the song, perhaps most especially the light-speed drum display, though the gales of guitar abrasion and the bestial barbarism of the vocals have much to do with that as well. However, the song also has an atmosphere of arcane majesty, due in part to the solemn and soaring clean vocals, the cavernous depth of the bass lines, and the bleak melodies that sweep through the tumult. Still more ominous facets of the song reveal themselves in the final third of its length. Very impressive.

Iätön (Finnish for “Ageless”) is the second album by the folk-influenced black metal band Häive, which is the solo project of Janne ‘Varjosielu’ Väätäinen. This album also features album design by Misanthropic Art. “Turma” (Finnish for “Ruin”) is the first advance track, which I encourage you to listen to below.

“Turma” benefits from a vibrant and immediately seductive recurring guitar melody (and some wonderful soloing), though the music also includes passages of gloomy, pounding heaviness with strangled, serrated goblin growls. A very catchy, head-moving song that also manages to generate an aura of mysticism. 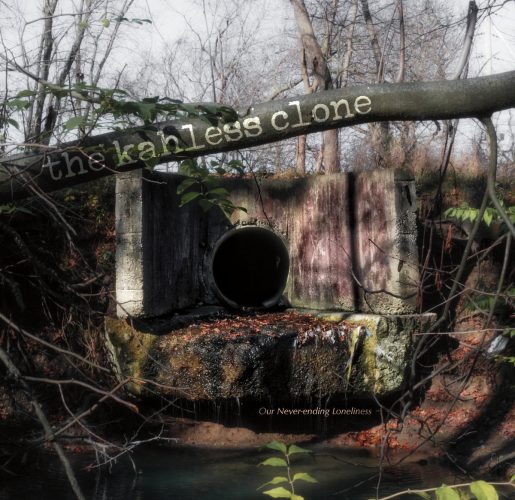 Our Never-Ending Loneliness is the second EP by the Chicago instrumental band The Kahless Clone. It will be released on November 3.

This band consists of Ben Johnson (keyboards), Zach Libbe (electronic drum programming), Garry Naples (drums), Larry Roberts (bass), and guitarist Vito Marchese, who is also a member of Novembers Doom. It is Marchese you will see in the play-through video released by the band for the third single from the new EP, “I Can Almost Reach You“.

I found this song completely engrossing. There’s a powerful rhythm section at work here, but while the drum and bass tandem really are attention-grabbing, the heavy riffing and the lighter keyboard elements are equally integral to the song’s enormous appeal.

The EP can be pre-ordered at Bandcamp, where you can also listen to the previous single, “Is This What You Wanted?” Below, I’ve also included the play-through video for another track named “If Only We Had More Time Together…” 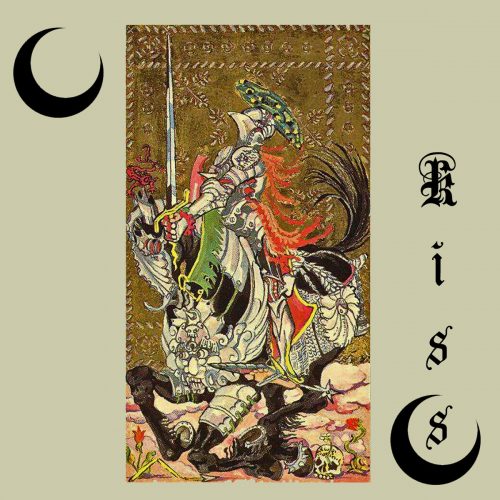 To conclude this round-up, I’ve chosen “Jester By Blood“, the fourth of five tracks on an EP named Black Moon Kiss by Witches Moon, the solo project of “The Witch” from Raleigh, North Carolina.

This is the first Witches Moon release I’ve heard (thank you Miloš!), though I see that there’s now an even more recently released one named The Grim Botanical that’s waiting for me on Bandcamp.

“Jester By Blood” is a bit of a genre hybrid that includes deep, pulsating electronic tones, the music of a dancing flute, rippling keyboard tones, other elements of dungeon synth (which are even more pronounced elsewhere on the EP), and the cawing of birds. The entire EP is a fine piece of sorcery, with no two songs quite the same in their stylistic and tonal ingredients.