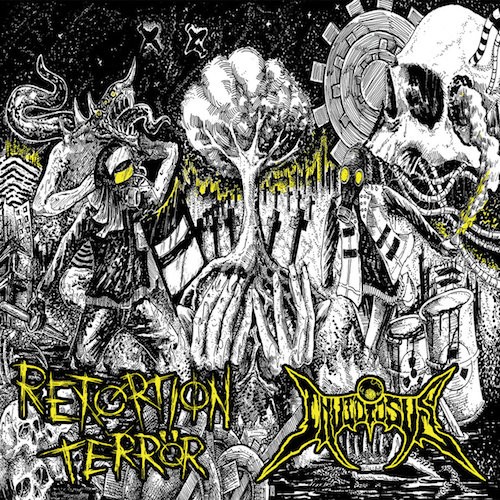 (Austin Weber presents our premiere of a new split release by Retortion Terror and Invidiosus.)

We’ve got a special early stream of the new split release from grinders Retortion Terror and longtime NCS favorites Invidiosus for you today.

While the name Retortion Terror may not ring any bells, knowing that legendary grindcore guitarist Takafumi Matsubara (Gridlink, Mortalized) is the main person behind it should pique your interest.

For those who don’t know the story, in 2014, shortly after the critically lauded release of Gridlink’s Longhena, Takafumi suffered a crippling and tragic brain infection that made it seem like he would never be able to play guitar again. But his tireless spirit fought against all odds to come back, and his material here with Retortion Terror is his first musical creation to come out since his incredible recovery.

The fantastic art alone should clue you in that this is a creative top-tier grind release, and not a rehash of plain and simple meat and potatoes grind. Takafumi’s near unparalleled grind riff-writing skills have been a cut above most, and that holds true here with his five songs for Retortion Terror.

At times the music here hews closer to traditional grindcore in style than his work in Gridlink, but his unique and manic riffing style is spread over all of it and enhances it, resulting in a fusion between old and new.

I’d love to give credit where it’s due to the other musicians playing on the Retortion Terror cuts but, alas, the only information given lists the line-up as Takafumi and “a mysterious lineup of international grinders”.

Joining them on the split are Invidiosus, who I’ve been covering here for several years now. The group has often shifted their sound and style with each release, so to see them do so again here is no surprise. On this split, Invidiosus lean into the grind vibe more than ever, while still retaining much of their death metal roots and added elements from more technical-minded death metal across five frenetic cuts that are quite memorable, a rarity in grindcore as a whole.

The result makes for some of their strongest material yet and an excellent foil to Retortion Terror’s opening salvo. In fact, Invidiosus’ material here alone is so strong that as soon as I heard it I knew I had to help do an early stream for this split.

This is a must-listen release for any grind freak out there in need of a quality heaping helping of freakish unhinged intensity. So jam our early stream of the full split below, and if you dig what you’re hearing, it will officially come out this Friday, October 20th, through Horror Pain Gore Death Productions. Orders can be placed through the links listed below.

**If by some chance you’re reading this and live in Japan or South Korea, both groups will soon align for a sick tour that runs through those countries. A poster listing the tour dates can be found below. 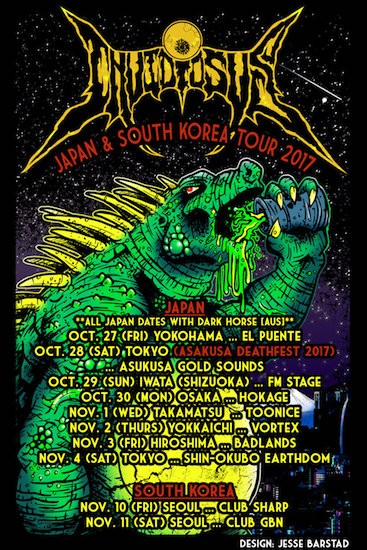 One Response to “AN NCS SPLIT PREMIERE: RETORTION TERROR AND INVIDIOSUS”