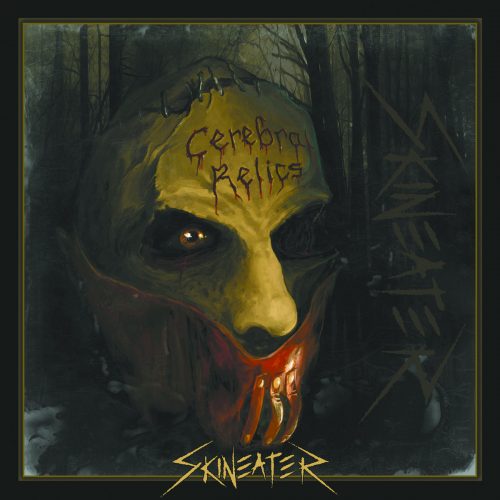 (Norway-based metal writer Karina Noctum returns to NCS with this review of the new EP by the Swedish death metal band Skineater.)

In addition to contributing to NCS, I do like to post music on two fairly big Facebook pages (Death Metal Institute and Viking, Folk, Black Metal and more). We get hundreds of post requests weekly and I keep on opening them because at times I stumble across something as good as Skineater’s Cerebral Relics.

This Death Metal band has members from acts such as Wombbath, In Thy Dreams, Pale King, Geist, Infernaeon, Ninety Minute Reflex, The Absence, Defiatory, Feared, and Wachenfeldt.

Before starting to tell you more about the awesome Cerebral Relics, I must confess that I have a pretty ambiguous stance when it comes to Swedish Melo-Death. There is a certain kind of melody I have never been able to get into, a style that is sickeningly sweet to my ears. I regret the fact that at times, based on certain melodic traits, people develop completely unfair prejudices against the whole subgenre. There is a whole treasure trove underneath that is not exactly the same as the kind of melody that influenced much of commercial American deathcore.

The other side of melody, the one I prefer, is a bit darker, at times melancholic, and full of virtuosity without being overdone. It’s beautiful and used in just the right amount, enough so that everyone can enjoy the music without getting that “sickeningly sweet” feeling. Skineater belongs to the latter group and fits perfectly into my own approved personal list. I thought I needed to share it here on that account, and also because it is excellent.

Cerebral Relics begins with a pretty cinematic intro that brought me back to the last song in Murder Construct’s Results, and I guess both bands must be inspired by horror movies.

The first song “Sociopath to Enlightenment” reminds me of the way Bloodbath, for example, provides modern renditions of old school sounds. In addition it has clearly been influenced by Hypocrisy, but only in one of its layers. The way in which the song transitions and adds new layers as it develops are significant elements of its appeal. There is depth in the music, which adds a different dimension.

“A Woman Will Die in the North” takes you back to the awesome sounds of early At the Gates, the kind of Death Metal that deals with introspective matters, and the music reflects that focus. You get kind of the same feel from Death, a strong sense that the melodies come straight from the musician’s soul.

The song has a tinge of despair in it, and Skineater align every instrument to add to that feeling, building up and then toning it down to let in a groovy part. Then the build-up begins again, but it is carefully done, the guitars scaling and getting ever more intricate but never breaking into a display that could fracture the overall feeling. It is not overdone, and in this way the song preserves its wholeness until the end.

“Sentinels of Misery” takes you to a different soundscape altogether. It takes a while to get there, but you will meet a Viking-like part! It is catchy, the kind of part that will cause people to start singing along and waving with the horns up. There is a respite, when the music is led by a melancholic riff, but then becomes even faster. An interesting, rhythmically varied song structure here.

“Compost Planet” has the more Gothenburg Death-Thrash feeling to it, bringing to mind acts like Dimension Zero. When it comes to Skineater, you get the beautiful harmony but also darkened guitars as a bonus — very nicely done. The band throw in an awesome, heartfelt solo for good measure as well. I could listen to an entire album composed solely in this style without getting enough of it. It is a perfect blend!

“Labeled; Confidential” ends this musical journey, bringing us back to that Viking vibe that was introduced previously. The slow pace only highlights the solemn aspect of the song, which is developed even further through the introduction of rather dramatic female vocals that are subtly layered and aid in building the atmosphere. It all ends in a grandiose manner with a solo.

This really is a very good EP that takes you through different styles within this subgenre. Beautifully composed, not overdone at all, and quite enjoyable. The only downside is that it will leave you wanting more!