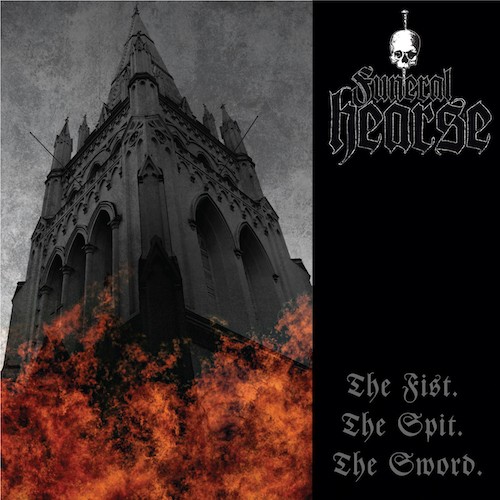 In the space of a compact, three-song EP of less than 13 minutes, the Singaporean band Funeral Hearse create a dramatic, unearthly, soul-shivering experience — a black metal furnace of fury, terror, and desolating delirium, laced with solemn ecclesiastical chants and choirs that seem to represent the target of the assault.

This new EP, The Fist. The Spit. The Sword., will be released on November 10 (tomorrow!) by Redefining Darkness Records, both digitally and on tape, but you can (and should) listen to it right now, at the end of this post. 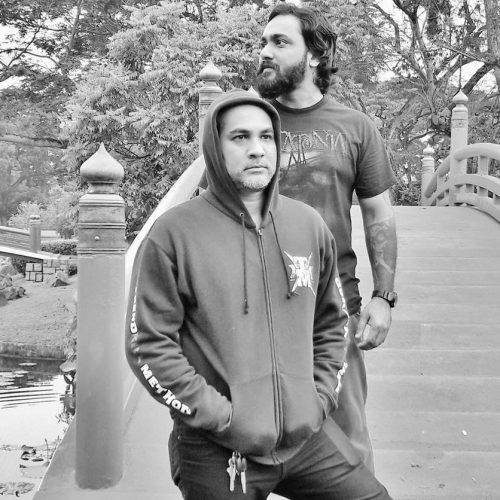 The Fist. The Spit. The Sword. was preceded in May of this year by the band’s first EP, a four-track offering named Heralding the Deathwinds, which will be included as the B Side of the tape edition of this new one. That previous EP is a black metal bonfire, a ferocious ravager that has some obvious punk influence mixed in with obsidian-dark melodies and ripping drumwork. But one aspect of the music that especially makes it stand out are the sounds of vocalist/lyricist Deadwax — which are utterly unhinged and frighteningly wild.

The genesis of the new EP was explained in this way by the band’s multi-instrumentalist Azrael:

“I had this idea for The Fist. The Spit. The Sword. after watching a documentary about sins and how diffrerent religions have different acts to redeem your sins such as confession and/ or cleansing yourself in water. The idea that you commit a sin and the ease of which you are forgiven, means that one who sins can be forgiven to commit more sins in the future. I found that preposterous.”

That explanation helps listeners understand both the way in which the opening track begins (and ends) — with the echoing tones of reverent monastic chants — and also the appearance of an angelic choir, accented by strings, whose worshipful voices rise up at the start of the last track. And in both of those songs — “Purification” and “Profanation“– those stately, magisterial introductions are quickly followed by ravaging sonic assaults. The cold yet simultaneously superheated riffs come in high, rapid waves of bleak, otherworldly sound over a flurry of blasting drums, with the lyrics proclaimed in a sequence of petrifying shrieks, the music accented by a rapidly writhing lead guitar.

In between these two apocalyptic tracks is a change of pace, a briefer piece of music called “Sins“. Both gloomy and glimmering, it consists of the strumming and picking of a hypnotic, melancholy melody and doubled, slightly out-of-phase spoken words. It provides a break in the EP’s intensity, yet also deepens the EP’s shadowy moods.

This excellent EP was produced by Funeral Hearse and Vinod Vastaran (Rudra) and mastered by Vinod Vaskaran at LightWave804 Studio. You can pre-order via Bandcamp:

4 Responses to “AN NCS EP PREMIERE: FUNERAL HEARSE — “THE FIST, THE SPIT, THE SWORD””