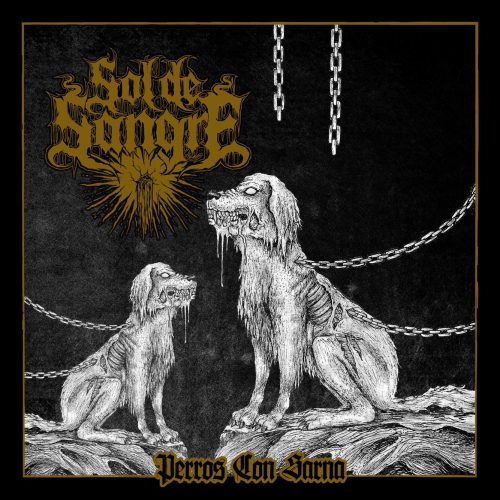 Today we get to divulge a lyric video for the third single released so far this year by Sol De Sangre, the name of which is “Perros Con Sarna“. The first single hooked me straight through the gills, the second one drove the hook deeper, and this third one shoved the hook straight up into my brain pan and made mincemeat out of the small squirming organ that lives there. Despite the brain damage, I will nevertheless attempt to string together some words about the experience.

But first, let me remind you that all three of these singles are destined to appear on the band’s first album, which is projected for release early next year. Although this will be a debut record for the band, its members aren’t newcomers to the metal scene, all of them having honed their lethal skills in other South American bands over a span of decades. And what the album represents is a kind of tribute to the evil death metal they grew up with, along with other aggressive influences that include hardcore and thrash. 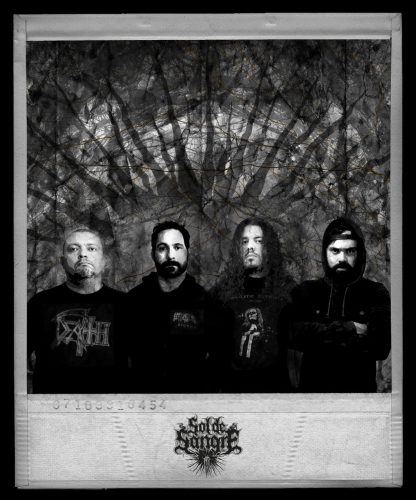 I think “Perros Con Sarna” means “mangy dogs” in English, though my Spanish is pretty rusty. But there’s nothing rusty about the band’s execution of this electrifying piece of thrashing death. It does have the feral, rabid feel of a diseased animal coming for your throat, all hammering drums and maniacal, ripping riffs, as well as the oozing, dismal, pestilential quality of something very unwell.

Speaking of raw and maniacal, the vocals are still among the most vibrantly berserk and thoroughly vicious you’ll find in the current death metal and hardcore scenes. Like the band’s other singles, this one also features an array of brilliant, attention-grabbing solos, as well as constantly changing heavy-grooved rhythms and multiple varieties of riff murder.

In case you missed the first two singles that Sol De Sangre released, I’ve included streams of both of them along with our premiere of the new one. To repeat what I wrote about them previously:

“Más Abajo del Infierno” goes like a bat out of hell, or perhaps more accurately like a big demon freight train charging straight out of hell. It’s an explosive blast of jolting old school death metal segmented with slitherings of serpentine melody and a couple of big eye-popping guitar solos. One of the song’s many strengths, as I’ve said above, is to be found in the vocal department — the vocalist’s howls and yells sound authentically insane, and the explosiveness of the song as a whole makes it easy for you to give free rein to your own most insane impulses.

“Muertos Con Ojos Estallados“, on the other hand, is just a goddamn massive tank attack of death. The pile-driving grooves are heavy enough to fracture concrete, and when the song is in full-on juggernaut mode it’s obliterating. It’s grisly and gruesome, with great melodic leads to go along with those titanic bass notes, head-battering drum beats, and destructive riffs. Once again, there’s also a hell of a solo waiting for you, and the raw and unhinged quality of the vocals again manifests itself as one more of the song’s many strengths.

The album was produced by Rolando Ramos Torres, mixed by the great Tomas Skogsberg at Sunlight Studios in Stockholm, Sweden, and mastered by Joel Grind (Toxic Holocaust) in Portland, Oregon.

You can get all three singles on the Sol De Sangre Bandcamp page: