(This is Vonlughlio’s review of the new second album by the California death metal band Hideous Rebirth.)

As I was looking at Bandcamp for new music, I decided to check out Gore House Productions (a label in Los Angeles, California) and saw that Hideous Rebirth were about to release a new album entitled La Fosa Comun. At first I was a little bit hesitant, because I’d only heard one or two earlier songs by the band, and they were just ok for me. Despite that, I pushed play and was surprised at how different the music sounded on the new track from the album that was then available.

Then they released a new song, “Haunting Carnal Illusions”, featuring the talented Mr. Frank Zelada (Ossification), which premiered here at NCS. This impressed me as well, and the production of both this and the previous track enhanced the songs’ appeal.

Yet I still did not place an order then. Time passed, the release date arrived, and I proceeded to give it a listen (keep in mind that I was not that familiar with their previous EP and album, having only heard a couple of songs), and after one listen, I decided to order it. 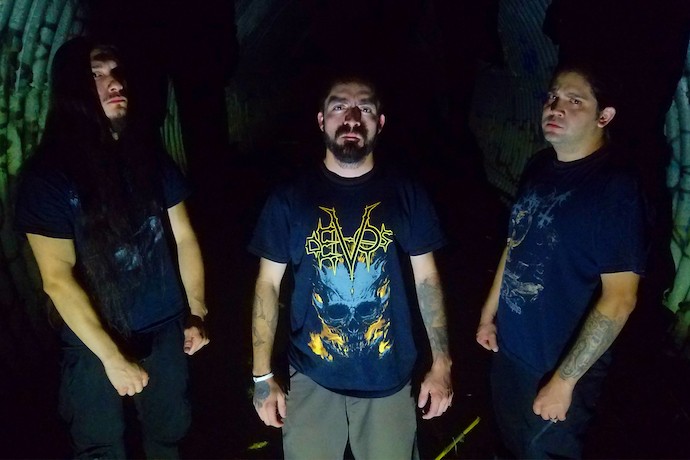 I have to say that for me this is one of the biggest surprises of the year, one of those releases that I instantly loved. After listening a few times I decided to check out their 2012 debut album Paritally Devoured and then their 2015 EP Completely Devoured. And now with this new album, the band’s progression is evident, and for the better. One factor may be that when Hideous Rebirth began, it was a one-man band, and that with the inclusion of new members the music has evolved to something that will stand the test of time.

Once you start the first song, “Orgy of Souls”, you are already getting into the depths of La Fosa and going for a ride into the depths of the underworld with no hope of getting out. The compact length of the songs is a plus, and the natural production enchances the story they are telling. Yes, I mention the sound of this release because it allows you to listen to all the instruments clearly without them overshadowing each other. The riffs are diverse and a key part of how the songs differ from each other. The bass and drums are another key factor that balances the stucture and development of the songs in different sections.

But the one aspect I liked the most are the vocals, which fit perfectly and are executed with precision. They help tell the story of La Fosa Comun, like a Demon that is about to throw into it. I should also point out that the lyrics and themes of this album are not the typical blood, sex, killing, and gory stuff you often see in the genre (which I like, as you all know). I’m always open to bands in the genre straying into new topics, and in this case that’s more credit to the band for doing so.

Overall, it is always exciting to discover an album about which I have few expectations and end up loving. In this case the release is clearly Hideous Rebirth’s best work to date. I hope that this band continue to develop their sound while maintaining their identity. They sure as hell have gained one new fan, and I will definitely be on the lookout for what comes next.

Go listen to La Fosa Comun in full at the official Gore House Bandcamp page, and support it if you can: