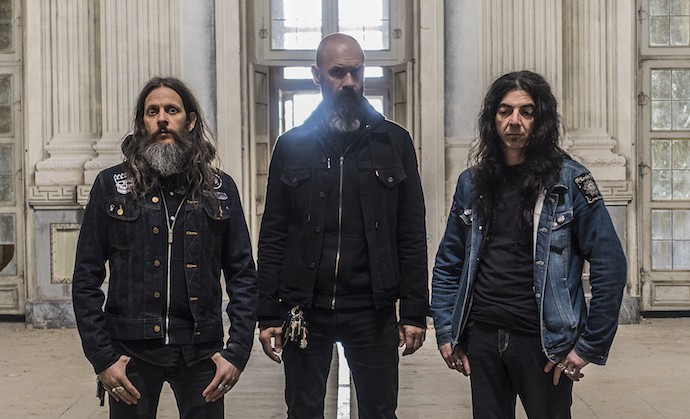 (Our contributor Wil Cifer usually brings us album reviews, but today he provides a most interesting interview with all three members of the distinctive Italian band Ufomammut.)

Back in September this Italian trio released 8 on Neurot Records, which has proven to be one of the year’s more interesting releases in heavy music with their blend of psychedelic sludge. I managed to catch up with them when they got off their most recent jaunt on the road to pick their brains about the creative process and what makes this band tick. The result is as follows.

The hardest part of being in a band can be interaction between other members over the years, so what has been the key to keeping the band together?

Urlo: A good dose of stoicism for sure… ahaha. I must say that we found a good alchemy between us. Poia and me are always together, we see each other every day, being 2/3 of the poster art collective Malleus. We’ve known Vita since a lot of years before we started the band. So… we three had great moments and bad moments, obviously. We all believe in what we’re doing, in one way or the other, so Ufomammut is what kept us together. And, at the end, after so many years, it’s been fun 🙂

Poia: We’ve been both lucky and stubborn: we had the chance to find the right people in the right place and at the right moment. And we’ve always been devoted to the music as the main engine of our lives: we made our choices about what was our own real path.

Vita: Playing in a band is like being married, sometimes it’s even more challenging because there are more than just two people to agree on something. Finding new ideas and incentives in music, living together as a band and having new experiences is probably the secret to keeping it together. 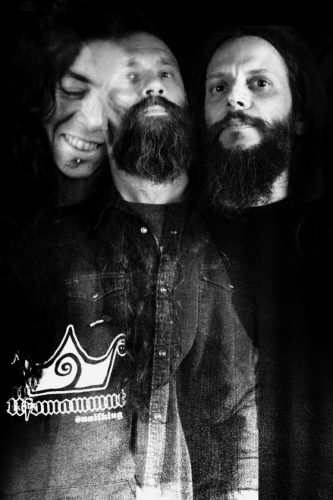 Do you see yourselves as being in a metal band? Or is heaviness now more of an organic element for you?

Urlo: Both things. Honestly I never think about Ufomammut as something that has to be “metal”. I always think about it as something more faceted, there are more vibes that all together create Ufomammut. Then, heaviness is surely something we have in ourselves, since the beginning. We’re not great fans of mere technique in playing, so we prefer to put our souls in what we do and the result is surely heavy

Vita: The sound of Ufomammut is inspired by the music we like. Most of what we like is heavy music.The different genres we like between the three of us all basically come from the same “root”. So, playing heavy music is completely normal for us and it is not something we planned before.

Italy seems to have a fairly healthy scene when it comes to heavy music — how much of an influence is the Church’s presence in this?

Urlo: I don’t know. I never cared about the influence of a possible Church in my life. And I don’t think there’s a lot of influence by the Church on heavy music in Italy. I think the Church is more interested in politics than in heavy music.

Poia: Exactly…the Church in Italy is part of the landscape. But, for the most part, it’s more an empty shell of traditions, richness, and political corruption than a deep spiritual guide for human beings.

Vita: The church and any kind of religion in general is not a part of my life. Music is the best thing I have and I wouldn’t love it as much as I do if religion were involved in it. 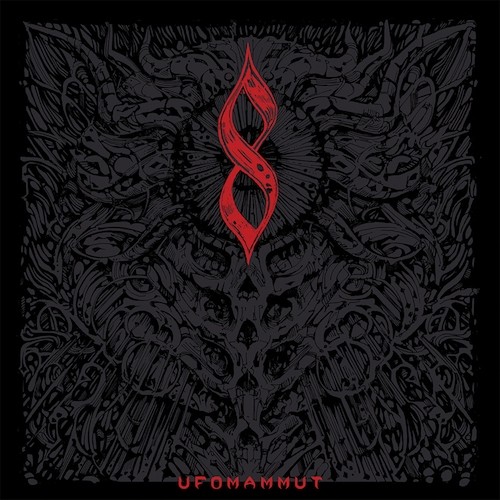 With so much going on over the course of 8 what were the challenges when it came to sitting down to mix it?

Urlo: We wanted to do something different from the previous works, both in terms of sound and composition. We recorded all live, with no overdubs except for vocals and synths. We wanted this record to sound evil and pure. And personally I’m very happy of it.

Vita: What we really wanted was to reproduce the power and the attitude that the band has on stage. That’s why we decided to change the way we record, with help from our sound guy and friend Ciccio and his associates from Femore.

Poia: Every step has been challenging for us: for the first time we entered the studio with the record almost finished and ready to play it all together in its entirety. We worked hard trying to be heavy and natural

What are some of the lyrical themes of 8?

Urlo: There are different themes on this album, from Babel, to the vision of god (not only intended as a cosmic figure that rules the world… it can also be a phone today…), of chaos, different things. It’s better to follow the lyrics together with the song flowing… it’s boring to talk about them as something separate from the music.

How is it working with Neurot Records?

Vita: They are great people. They know exactly what a band wants or needs because they are musicians as well. It’s very easy working with Neurot.

Urlo: They’re a family for us, we already have 3 albums out for them and everything has been wonderful and natural with them. No pressures and a lot of support. We couldn’t ask more  🙂

How has the band adapted to the changing landscape of how people consume music in 2017?

Urlo: I don’t know. I think that people consuming this kind of music are quite different from those listening to the mainstream. We see there’s a lot of support from the people, vinyls are back, CDs are not yet dead (I must say they’re too much alive…ahah), and digital is another thing working in different ways lately with a lot of different platforms to listen to music. Since the beginning we gave a lot of importance to our graphic aspect and so we usually work with the Malleus record label (Supernatural Cat) on a limited version of the vinyl, with hand-printed covers and all hand-manufactured here in Italy. And people seem to appreciate it a lot.

Vita: When I was a teenager the music business was different. It was less technologically oriented than now but there were collectors who used to buy vinyl and there were always some friends who didn’t care about vinyl and wanted you to copy a cassette tape for them. Sure, now it’s much easier to find music on the internet but collectors are still buying vinyl. The only good thing is that non-collectors are not bothering you anymore for home-made copies.

You guys are playing next year’s Maryland Death Festival. What do you feel the big differences are in playing music in the States versus Europe?

Vita: People who love heavy music worship, it is as though they are in a kind of tribe. It doesn’t matter if you play in US, in Europe, or Australia because the response is quite the same.

Urlo: Apart from the fact that there’s an ocean in between, people are the same everywhere. We all come from a first human that spread his progenies all around the world.

Poia: We travel a lot, in different landscapes, meeting people on the road, and then we arrive in our harbours. The concert places are universal tribes of people devoted to music. 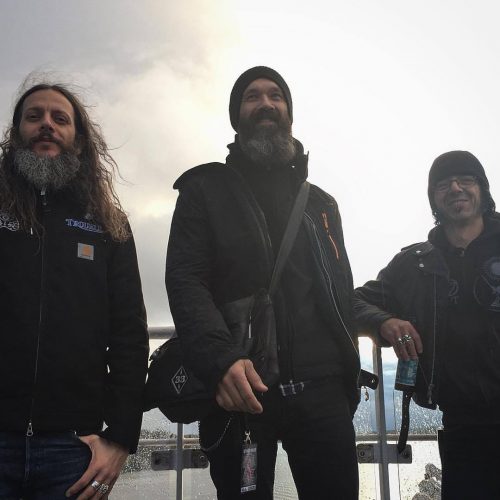 Has touring become more difficult with increased tensions in the world today?

Poia: Don’t know: We experienced more strict controls at the airports. But honestly I’ve never had the idea of being limited in the “touring-with-the-band dynamic” by the increasing tension. Up to now, by the way… because of course I think about how the word has lately evolved.

Urlo: It’s easier to die in a car crash than in a terroristic attack. The strange thing today is that we are all scared by something that, basically, we don’t know what it is… it’s the consequence of bad political choices that have been turned into hate between different religions and people. And it’s easy to understand why the first cause of death today is by suicide…

Vita: People should turn off the tv and start to think for themselves. It would give a better life to everybody on this wonderful planet.

As artists, other mediums must influence your work. What films or books have left a lasting impact on you?

Urlo: Too many to mention. Lots of books and movies, but also comics, paintings, colors while travelling, skies, seas, everything has an impact as an influence on me.

Poia: I could say Cosmos by Carl Sagan. And many, many other things…