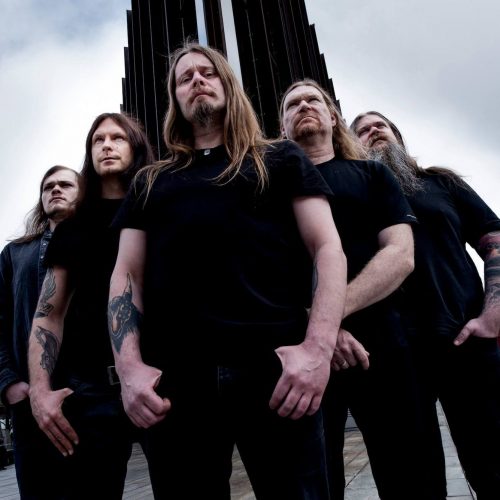 (Andy Synn continues to make his way down to London to witness shows that make his States-side friends violently jealous, but probably isn’t driven to do so solely, or even at all, by the prospect of that effect. Probably.  We have here his words and videos from the latest excursion.)

So last Friday, for the second time in as many weeks, I found myself back down in London at the Islington Assembly Hall to catch another of Norway’s finest musical exports, the nine-worlds-renowned Enslaved.

Now originally I had planned on seeing the Norse quintet in Nottingham the weekend before as part of their tour supporting Opeth but, due to still feeling like crap, I ended up not being able to make that show, resulting in me making the five-hour round-trip down South instead.

But, truth be told, given the option, I’d much rather see an Enslaved headlining show than an Opeth one, as the latter tend to be a little hit-or-miss live in my opinion, whereas I’ve never not had a fantastic time at seeing the former, so maybe things worked out for the best in the end?

The last time I saw tonight’s openers Svalbard they were playing a very different type of show in a much smaller venue, but — despite some technical difficulties with the bass amp afflicting the first few songs of their set – the Bristol quartet didn’t seem to let the bigger stage and bigger audience intimidate them (with guitarist/vocalist Serena Cherry noting that tonight’s show was a dream come true for her in particular) as they ploughed through an energising set of blackened, punky Post-Metal anthems (including a new track, “Unpaid Internship”, from their upcoming sophomore album) with the same vim and vigour as they displayed in Nottingham earlier this month!

Main support was provided by Folk-Doom three-piece Darkher, whose performance this evening brought a sense of bleak, bitter glamour to the proceedings and which, although lacking the feverish energy of the openers, more than made up for it in terms of immersive atmosphere.

While the majority of today’s so-called “Folk” Metal bands tend to err more towards the more frivolous, “hey-nonny-nonny”, approach, Darkher’s brand of slow-burning, dreamlike dread comes from a much gloomier, much more gothic place – more The Wicker Man than Men In Tights – and demands much more from its audience as a result.

Unfortunately, a large proportion of the audience decided they’d rather keep chatting amongst themselves than give the band the attention they deserved, meaning that the quieter parts of their set were often overshadowed by a steady stream of inane chatter which made it harder, though not impossible, to fully lose yourself in the music.

Still, the group didn’t let this distract or detract from their performance, and I’m sure they still left the stage having won over a few more fans all the same!

Of course tonight was really all about one band, and for good reason.

Clearly riding high off the critical and popular acclaim afforded to their recent (fourteenth!) album E, the quintet (including new keyboardist/vocalist Håkon Vinje, making his first London appearance with the band) hit the stage with a brilliant rendition of that album’s opener, “Storm Son”, before proceeding to gallop through an electrifying set, mixing material from across all eras of their career thus far, including two more cuts from E­ – “The River’s Mouth” and “Sacred Horse” – a stirring rendition of “Convoys to Nothingness”, a soaring “Roots of the Mountain”, and a powerhouse run-through of “Return to Yggdrasil” (which you can check out below), plus an epic performance of “One Thousand Years of Rain”, the best track from 2015’s In Times, and an unexpected (but welcome) blast through the classic “Vetrarnótt” from their debut album Vikinligr Veldi.

For those of you who haven’t experienced the full glory of an Enslaved live show, let me tell you – you’ve really been missing out on something special, as the band have developed into a truly brilliant live act over the years, one which melds the raging intensity of classic Black Metal with the bombastic swagger of Led Zeppelin and the proggy creativity of Pink Floyd… and while they may not be as famous (or infamous) as either of the latter two names yet, I honestly hope that they’ll one day be held in the same high regard.

Concluding with a back-to-back delivery of “Allfǫðr Oðinn” and a climactic “Isa”, Kjellson and co. then took a well-earned and well-deserved bow, having once again proved themselves to be one of the best in the business, as well as a band still at the very top of their game.