(TheMadIsraeli reviews the new album by Oblivion, which is out now via Unique Leader Records.)

I was a huge fan and advocate for Oblivion when they first appeared in the scene all the way back at the release of their debut three-song EP. I enthusiastically reviewed their 2013 debut album Called To Rise, amazed by their dedication to old school, riff-driven technical death metal that called to mind Suffocation, Incantation, and Pestilence. It was one of the best death metal records of its year, and as a result I’ve been very excited to see what the band would do next.

The Path Towards… is the first album in a two-album series about the inevitable AI takeover of the human race. Generally a tired concept that’s been done to death, Oblivion pull it off quite convincingly, conveying the horror and sense of existential dread of being phased out along with the accompanying unbridled and anguished sense of rage you’d expect from such an event. 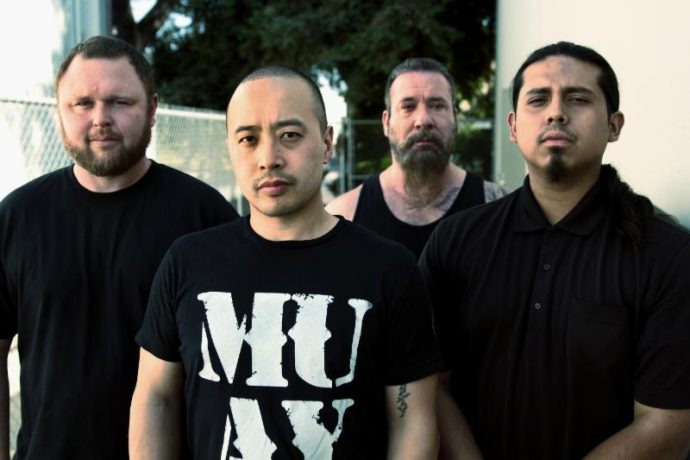 While I found the straight-forward, no-bullshit nature of the debut immensely satisfying, I’m also impressed by the stylistic progression the band have displayed on this album. Oblivion return with their dedication to the late ’90s/early 2000s brand of tech death with an endless sense of momentum, but they have added a good deal of exploratory hybridization, introducing elements of black metal on the atmospheric fronts as well as some doom elements. The vocal range has also been greatly expanded; Nick Vasallo’s high/low mixups are still in play, but a lot of blackened shrieks and grindcore-esque, raw, throat-ripping agony have been introduced as well.

The sophistication of the guitar front has also been ramped up quite a bit, as the counterpoint and rhythm/lead dynamic from Vasallo’s classical composition sensibilities are abundantly in evidence. There are a lot of moments on this album where the guitars aren’t locked in with each other at all. The combination of Ted O’Neill’s traditional death metal leanings as a guitarist and Vasallo’s classical background yields interesting results, producing melodic tendencies an certain kinds of dual-guitar riff distributions you won’t often hear elsewhere. This is a level up for sure.

Oblivion are at their absolute best on this record when they are hitting that perfect intersection of metal sonic quality and romantic-era rule-breaking. While I enjoy staple Oblivion meat-shredders like “Mechanistic Hollow” or “Holders Of The Sword”, the absolute best songs on The Path Towards… are those where the band just throw all the stylistic elements they have into a blender, and the most twisted, depraved metallic-enhanced interrogation takes place. Songs like “Awaiting Autochthon”, “It Has Become”, an “Zenith” are the absolute pinnacles and some of the best death metal you’ll hear this entire year. The more blackened death metal songs are definitely the best material on the record, and the more inventive.

In short, The Path Towards… trumps the band’s debut, Call To Rise, by miles. The level of songwriting evolution is remarkable, and the album sees Oblivion cutting their own niche in the Unique Leader roster in a big way. At this point,  no one else sounds like Oblivion, that’s for sure. The album contains a kind of sophistication, refinement, and precision that’s often missed for the sake of business and novelty in its genre sphere. It is horrific, ferocious, and unknown. It’s one of the best death metal albums of the year.

One Response to “OBLIVION: “THE PATH TOWARDS…””