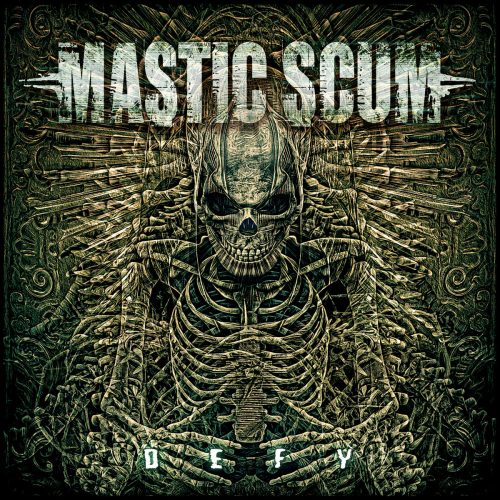 (DGR turned in this review of the new release by the Austrian death merchants in Mastic Scum.)

It has been four years since the release of the full-length disc CTRL by the Austrian death metal (and self-described grind-influenced) machine Mastic Scum. The album, which saw the band moving further into the realm of chunk-filled groove and saw-blade-sharp death metal riffs, was reviewed on NCS way after its release, though we had covered it in the lead-up.

Mastic Scum’s discography has a pattern of large gaps between full-,lengths, usually supplemented by a collection of splits and EPs, and in their case even a live DVD entitled Rage. However, the end of October brought us the release of the group’s new EP, Defy, providing a brief transmission of sound from the otherwise shadow-cloaked world through which Mastic Scum move. 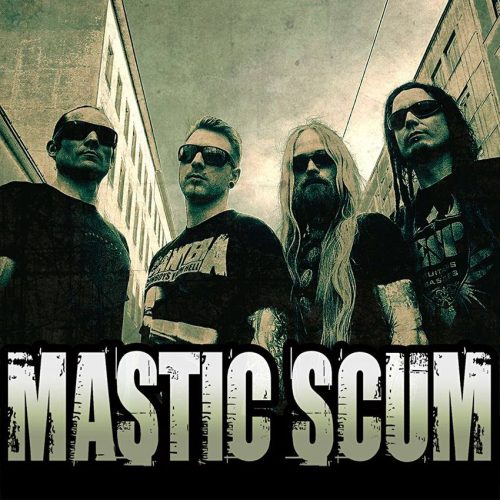 The EP, which can actually be physically purchased as part of a vinyl split alongside Greek deathgrind band Headcleaner’s own EP, Real Life Disconnection, clocks in at a little over seven minutes of music and is spread across three songs. The three songs present on Defy have the Mastic crew almost perfectly lined up with what they were doing on CTRL, cranking out two songs filled to the brim with hammering rhythm sections and one sub-two minute track that sees the band scorching everything you’d previously heard on Defy.

Mastic Scum have been content to let themselves be defined by their sense of thudding groove, and Defy doesn’t do much to dissuade you from the assumption that the seven minutes you spend with it will be filled with hammering rhythms and up-front thick vocal segments.

Mastic Scum basically have two modes — a neck-snapping groove and a buzzing death metal section, which is where you get your medically prescribed blastbeats. “Virtual Irreality” continues the band’s thematic war against all mood music, and Defy’s second song, “Twice The Pain“, has quite possibly the most obvious, vertebrae-cracking mosh call out there, and it works for that reason. As the band barrel forth in a high-speed, end-over-end tumble into the chorus, the music suddenly stops for a real quick vocal shout, and then it is just a death maestrom from there.

“Negation” does exactly what its namesake implies, albeit in a different sense than just negating everything before it. It’s the aforementioned earth-scorcher of a song, coming in at sub-two minutes. and is basically a hyperspeed blast for those who thought the earlier tracks on Defy weren’t moving fast enough for them. It closes out Defy in a violent fashion and actually feels like it is just bolted on to the thudding ferocity of “Twice The Pain” before it, so when you loop back around to Defy’s opener “Virtual Irreality” again, the whiplash is sudden.

If anything, Defy is resolute in showing that Mastic Scum can still bring the pain, four years removed from CTRL. Even with a small change in the lineup, the band’s core remains strong, and they are continuing their evolution into a mechanized death metal machine. Defy wets the palate enough to make you want more, and with the group showing signs of finally rolling full-steam ahead, maybe it won’t be that long now.

The seven minutes of percussive death-groove present on Defy is heavy enough to be earth-shattering on its own, and here’s hoping the band continue their trek into the realm of the industrialized war machine for their next full-length.