The underground French label Antiq Records has recently released an hour-long concept split about legends of the Alps by three black metal bands from different countries that share that famous range — Tannöd from Germany, Rauhnåcht from Austria, and Hanternoz from France. The title is Spukgeschichten – Anciennes légendes des Alpes.

A few of these ten songs have previously been released for streaming, but today, as the album is being released digitally through Bandcamp, we have the full album stream in its entirety — preceded by a few remarks about the musical contributions of each band.

The five tracks by the Bavarian band Tannöd that begin this new split are the band’s first publicly released output, and they make for an auspicious debut.

The opening instrumental track “Höhlenzauber” has an ancient and ominous sound, ringing and mystical. As the volume swells and subsides, the music seems cloaked in the moonlit glow of damp mist and the haunting gloom of deep shadows.

The following four Tannöd tracks are much more bracing, but also in line with the chilling atmosphere of that introductory piece. The songs rumble and rock, thunder and hail, whirl and dance, pushed in their ferocity by an array of electrifying riffs and by rasping vocals that themselves sound like cracking ice. The attractive guitar harmonies scattered across these tracks are grim and cold, but they also gleam like sun on frost.

When Tannöd slows the pace in these songs, the mood tends to become more sinister, frigid, and sorrowing. There is sometimes an ethereal quality to the guitar reverberations, and a bleak, swelling grandeur in the music’s most stately moments that sends the mind aloft over eons-old crags of snow and stone.

Rauhnåcht is the solo project of Austrian-born musician Stefan Traunmüller (Golden Dawn) (who also seems to be a part of Tannöd). Beginning in 2010, the band has released two albums as well as a handful of shorter releases

Rauhnåcht contributes two tracks to the split, both of them lengthy compositions. Given their length, they do become musical journeys, or they could equally be thought of as rich tapestries of sound, incorporating the resonance of medieval melodies and old instruments as well as the heaviness of desolating riffs, hard-hitting drums, and vampiric vocals.

Shimmering and symphonic synthesizer layers, which can be heard as horns and strings or as astral cascades, give the music a mythic and majestic cast, but it is a melancholy grandeur that Rauhnåcht bring us, along with glimpses of an old earth whose inhabitants now haunt our present like spirits. Beautiful music — mesmerizing and heart-swelling, but also skin-shivering.

To close the split, Hanternoz deliver three tracks, their lengths somewhere between those of Tannöd and Rauhnåcht. As was true of Rauhnåcht‘s songs, Hanternoz include melodies and instruments that have a medieval and folk atmosphere (there are, for example, prominent parts for the flute and acoustic guitar), and even when anguished, flesh-rending vocal extremity, battering drums, and heaving or raking or rocking guitar chords enter the picture, the music is still somehow reverential, and not quite something of the world we now know.

The second Hanternoz track (“Diables des cloîtres dans les Monts du Matin”) rocks much harder than the first one (“Le baron des Adrets, 1513-1587: la légende noire du Dauphiné”), but still has an archaic folk influence within all the pulse-pounding energy, and it becomes tortured and bereft, and then gorgeous, when the pace recedes, while the third one (“Le mal des ardents”) combines enormously seductive, moody melodies (one of which sounds as if performed by a trumpet), with eruptions of devilish frenzy and mid-paced, head-nodding cadences. The vocals are intense throughout all three songs, but may be the most intense of all in the last one (though here they’re mixed with spoken words, accompanied by acoustic guitar harmony).

A thoroughly engaging group of songs by a band who deserve a lot more attention. 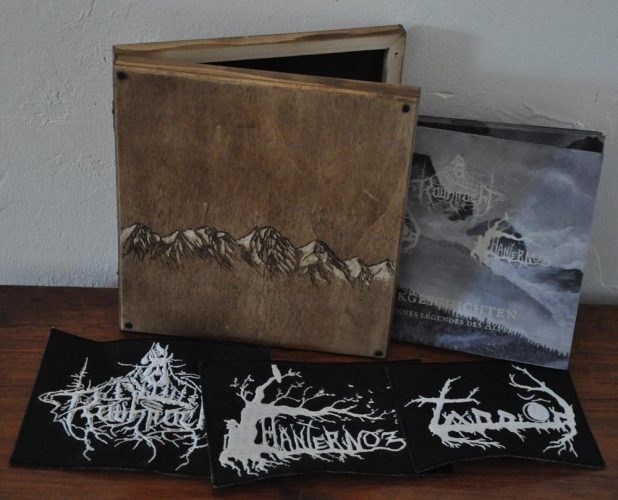 The recordings of the three bands who participated in this split reflect distinct stylistic differences from each other, but they complement each other beautifully in this completely engrossing split.

Enjoy the full album stream below.  To order the album, go here:

One Response to “AN NCS SPLIT PREMIERE: TANNÖD, RAUHNACHT, HANTERNOZ”