André Coelho has done a fine job rendering the artwork for Altered Beast, the forthcoming second album by the Portuguese thrash marauders in Perpetratör, which will be released by Caverna Abismal Records on January 31. The cover art captures both the entirely appropriate title of the album and also a sense of the music’s own rampaging ferocity.

However, although the music has the kind of wild and berserk energy as those mutant barbarians depicted on the cover, it’s fiendishly clever music as well — as catchy as chlamydia and executed with razor-sharp skill. And you’ll see what we mean when you kneel before “Altar of the Skull“, which is the song from Altered Beast we’re premiering today. 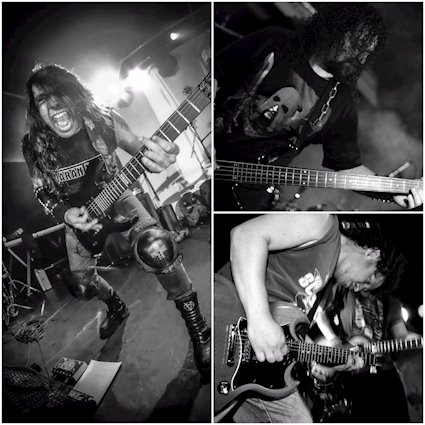 Altered Beast is the follow-up to Perpetratör’s eye-opening 2014 debut album, Thermonuclear Epiphany. As good as that album was, Perpetratör have upped their game on the new one, both in the quality of the production and in the diabolical seductiveness of the songwriting.

“Altar of the Skull” is an excellent example of what the new album holds in store. Speed, of course, is the name of the game, and the song is an adrenaline-fueled rocket ride, launched immediately with a burst of howling, shrieking, laser-pulsed guitar work and battering percussion.

As mentioned, the riffs are devilishly infectious, but the song also features rapid rhythmic and tempo changes (although the song is persistently headbangable notwithstanding those changes), firebrand vocals, and an assortment of solos that range from exotic, haunting, and reptilian to full-on flame-throwing.

In a nutshell, “Altar of the Skull” is a shitload of blood-rushing fun. And there are 10 more blasts of vicious and electrifying thrash waiting to be discovered on the new album. If you like what you hear, check the links below for pre-order updates — the album will be released on CD and tape. And if you’d like another taste, we’ve included a previously release track (“Extreme Barbarity“) along with our premiere.

2 Responses to “AN NCS PREMIERE: PERPETRATÖR — “ALTAR OF THE SKULL””