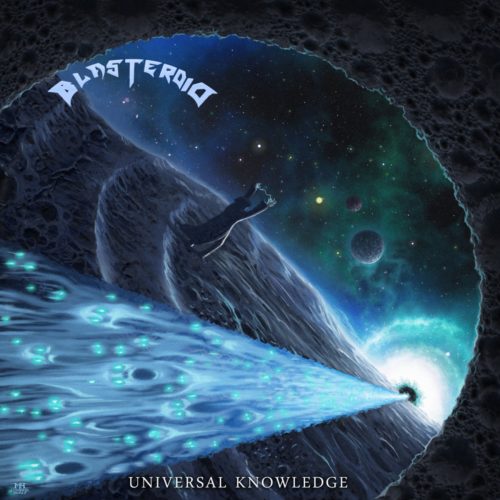 (Andy Synn prepared this review of the new EP by Blasteroid from Athens, Greece.)

List season may be over (for me at least), but that doesn’t mean it’s time to stop covering new music, so you can expect to see a bevy of new reviews – some from 2017, some from 2018 – popping up here and there over the next couple of weeks.

And what better way to begin than with the debut EP by progressive Tech Death fret-wizards Blasteroid – a band with simultaneously the greatest and worst name of any band ever.

Clocking in at just under twenty minutes in length (and featuring some truly eye-catching artwork), Universal Knowledge is made up of four songs, plus one extended intro, combining the high-energy molecular-riffology of Obscura at their thrashiest with the indulgent melodic progginess of Beyond Creation, and ultimately winding up with a sound highly reminiscent of those underrated Prog-Tech troubadours Hieronymus Bosch.

First track proper, “Baryogenesis”, immediately hits you right between the eyes with a flurry of intense, nimble-fingered riffs, souped-up thrash beats, and attention-grabbing bass lines, all delivered with a sense of madcap energy and laser-like focus, building to a second half which throws any remaining caution to the wind in a shamelessly extravagant display of blistering lead work, precision-targeted blastbeats, and hefty, guitar-heavy hooks.

This pattern – if you can call it that – is then repeated throughout the rest of the EP, with the band flinging out a seemingly endless array of rapid-fire riffs, complex-yet-catchy percussive patterns, and extended digressions of lavish melodic proggery, as if their lives depended on it.

Picking out highlights here is therefore quite difficult as, due to both its short-but-sweet run-time and the overall quality of the material on offer, there’s not a moment on Universal Knowledge which doesn’t feel perfectly placed (not to mention impressively, and impeccably, performed).

However I’d be remiss if I didn’t mention the exquisitely progressive undertones of “Pillars of Creation”, whose mix of reckless (and often unexpectedly melodic) technicality and electrifying metallic intensity (not to mention some truly-stand-out bass work) manages to come across as both utterly organic and yet carefully calculated as it shifts and shimmies, twists, turns, and contorts itself into ever more elaborate shapes over the course of five thrilling minutes of prime Tech Death magic.

Concluding with the rippling melodies and viscerally-infectious, cramp-inducing riffery of its title track, Universal Knowledge ultimately turns out to be a fresh and invigorating take on a sound which, in lesser hands, could easily have come across as overly-familiar or inordinately in thrall to its influences.

As it stands, however, this EP is a real diamond in the rough, delivering an instant hit of adrenaline every single time while also consistently rewarding repeat listening with new angles and new avenues to explore.

One Response to “BLASTEROID: “UNIVERSAL KNOWLEDGE””