This makes the second time this year that we’ve premiered a music video for a song by the Boston-area band Lost To the Waves. The first time, last spring, we debuted a video for “Remember Me“, a song that was then destined to appear on the band’s EP, Nightfall. Nightfall was released not long after, and today, as 2017 winds its way to an end, we present the video for another track off Nightfall — a song called “Crucified“, which features guest vocals by Donnie Lariviere (ex-Death Rattle).

The song starts digging its melodic hooks into your head right away, but it starts pummeling and battering pretty quickly as well, and vocalist Ben Lavoie sounds like he’s coming straight for your jugular, fueled by scorn and rage. 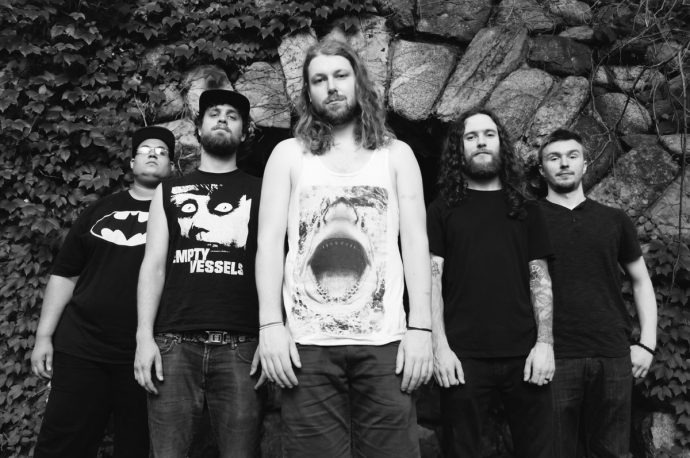 The song’s swirling melodies have a fluid quality (and a dismal edge), which contrasts with the track’s brute-force, near-atonal pile-driving, which in turn contrasts with the soft, soulful, and sorrowful reverberating guitar melody that brings things to a close.

When you hear the lyrics and see the video (which was edited by Nick Court and includes film of the band’s stage performance), it will become evident why the band chose to premiere the video on Christmas Day — it takes a dim view (to put it mildly) of organized religions of all stripes.

“Crucified“, and Nightfall as a whole, were recorded by Sean Fitzpatrick at The Brick Hithouse, and it was mastered by Brad Boatright at Audioseige. Nightfall is available on Bandcamp: