Happy New Year to everyone!

Our 2017 LISTMANIA series isn’t finished yet, even though the year now is. And really, there’s no reason to think that it should be finished. There’s a decent argument to be made that before you decide which releases were the best ones in a given year, the year should be allowed to end first.

We have seven more year-end lists in hand and ready for publication, and three more that should arrive this week, including two eagerly awaited ones from Austin Lunn (Panopticon) and Semjaza (Thy Darkened Shade). Even if we post two per day beginning tomorrow, LISTMANIA will continue on into the second week of the year. And at some point soon I’ll begin rolling out the Most Infectious Song list.

But today I’ve decided to highlight some Lists of Lists that have appeared recently. These represent the efforts of some hard-working people to aggregate a wide range of Best of 2017 lists, including one master list that’s based on the selections of our own readers.

The first of these Lists of Lists is one created by To the Teeth, whose 2016 master list I also shared around this time a year ago.

Peter has posted his own personal Top 50 list, which you can see HERE, but he again compiled a “List of Lists”. To do that he began by assembling a population of 75 international year-end lists, which included a lot of “big platform” mainstream publications as well as lists from scurrilous metal-only outlets such as our own; those 75 also included separate staff lists from some sites (such as our own). This year, these were the lists he included in the aggregation process:

All together, these lists included a total of 529 records. Peter then winnowed that large mass of releases by filtering out what he deemed “non-heavy” albums that appeared on cross-genre lists, as well as records that were only mentioned once. That reduced the size of the population to 228 albums. And he assigned point values to the selections based on the rankings they received at their original locations. Through those calculations, he came up with a Top 50 “list of lists”.

As I did last year, I’m going to re-post the Top 20 names on To the Teeth’s “list of lists”. To get more details about the methodology, to see the complete ranking of 50, and to read Peter’s thoughts about the outcomes, go HERE (Facebook) or HERE (Reddit).

On December 1st of last year I did as I do every year and invited our readers to share their own year-end lists in the Comments to THIS POST. Since then, dozens and dozens of lists have been posted in the Comments there; the most recent addition appeared just two days ago, and I suspect more will be added even as we move into 2018.

One of our enterprising followers, Glenn Whitehead, did what I dream of doing every year but never do because I’m too busy and/or lazy: With the aid of an Excel spreadsheet, he counted the number of times any album was included in that big collection of NCS reader lists (a total of 579 albums have been listed to date) and then ranked them in groups according to how many times the album was mentioned. This resulted in 548 groups. At the top was one album that received 15 “votes”; at the bottom was a large list of albums that received only one “vote”.

In a Comment on that post (updated just yesterday), Glenn identified the albums that received at least four votes, and I’ve cut and pasted the results here — with thanks to Glenn for doing the work:

In Glenn’s December 31 update to his original Comment, he also identified the albums that received three “votes”, and also provided some impressions from the project as well as his own list of albums that he believes didn’t get the attention they deserved. He named Immolation as his vote for “Extreme Metal Record of 2017” and Havukruunu as his “find of the year” (“An epic heroic massive Folk/Black masterpiece!”). 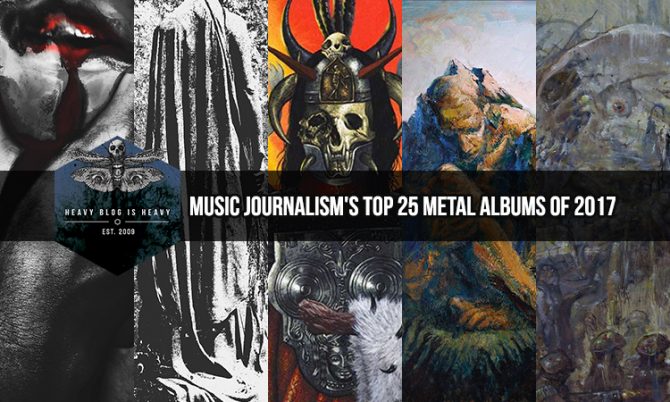 Heavy Blog Is Heavy did something akin to what To the Teeth did, aggregating lists from various sources and creating a ranked “List of Lists”, which they named “Music Journalism’s Top 25 Metal Albums of 2017“. They’ve done this before, but this year HBIH says, “we have refined our system to something that is much more manageable and also much more representative of the big picture of what “the industry” (i.e. journalistic publications and blogs of note that cover metal music and/or culture) feels is important and stands out.”

None of our own staff lists were included in the HBIH aggregation process, possibly because we don’t count as a “blog of note that covers metal music”, but more likely because most of our staff lists aren’t numerically ranked. Here are the publications and blogs that HBIH chose to include:

HBIH aggregated these ranked lists according to a methodology they explain HERE, and posted these results a couple of days ago:

This list was followed by a group of essays about the results, written by HBIH staff members; the first of those (by Eden Kupermintz) is quite critical of what “mainstream” metal publications and sites tell their readers is the best metal, as reflected in the above list of 25. So I guess it’s a good thing that NCS wasn’t included. To read the essays, go HERE.

5 Responses to “LISTS OF LISTS”