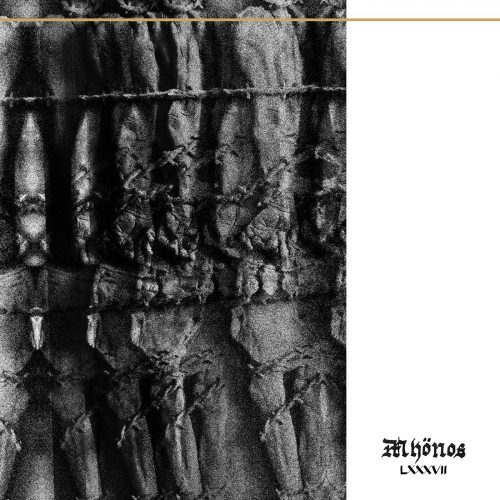 The sounds of Doom are as manifold and multi-faceted as a garden of night-blooming flowers, some alluringly beautiful and some poisonous, some that tower and some so seemingly incorporeal that your hand might pass through them as if through a mist. The sound of the French band Mhönos, as captured in their new album LXXXVII, is the sound of nightmare, the sound of oppression and paralysis, the sound of derangement and death in a freezing void. It is the incantation for an unsettling trance that haunts the mind for hours after its final silence.

The album is being released on CD and DLP by Dead Seed Productions and on tape by Zanjeer Zani, and today we are premiering the album through a stream from Bandcamp, where it is also now available. 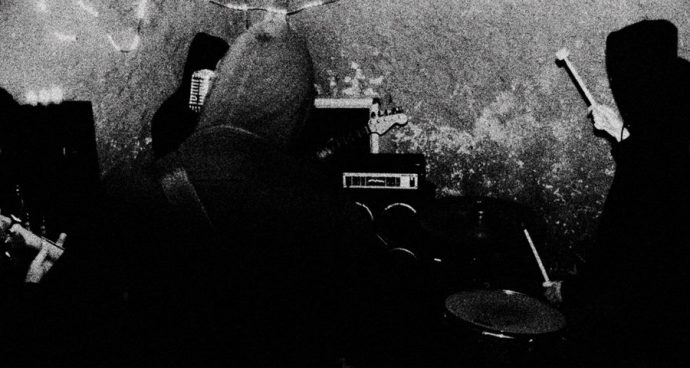 This is the third album of Mhönos, a collective that includes three bass players, two percussionists, and one vocalist, and among whom are members of such other fine Rouen-based bands as Sordide, Malemort, and Ataraxie.

The album consists of four tracks of imposing length, ranging from roughly 10 minutes to almost 13, and denominated only by Roman numerals. It’s possible to identify the sonic ingredients of these compositions, and even to map their course, and I’ll do a bit of that by way of introduction, but that’s a kind of pedestrian way of presenting the music, and a wholly inadequate one, because it is the feeling of the music that counts here — or rather, the unsettling emotional response it induces, and the visions it brings to the mind’s eye.

Mhönos build these songs gradually, adding layers of sound and expanding volume, establishing long droning through-lines and repeating percussive sequences (which at times have a quasi-industrial resonance), and then varying the tones that twine around them in a way that coaxes changing moods — though none of those moods is tranquil or comforting. The absence of a guitar and the general dirge-like pacing gives the music a frigid temperature and an ominous weight, although the band extract a greater array of sound from their trio of basses than you might expect. The vocals, which appear infrequently but effectively, give the music an uneasy edge of insanity, moving among fervent and feverish ritualistic exhortations and the delirium of wild, agonized shrieks and tortured yells.

As mentioned earlier, sequences in these songs can have a trance-inducing effect — the opening minutes of the opening track provide a prime example of that. Indeed, the entire first track could be considered trance-like, thanks in part to the repetition of a martial, ceremonial drum rhythm and the layering of bass patterns, some droning, some bleak and craggy, some higher-pitched yet still grim. But those disorienting vocals and other, more moaning and squalling bass motifs, prevent the song from becoming a method of self-hypnosis.

The second track also builds and repeats, but it becomes a more animated experience, with a brutishly hammering bass line and the tumble of a ritualistic drum rhythm providing the main anchor points. There’s a hammering quality about the entire track, although the pounding rhythms undergo slight changes. The overall atmosphere is one of inhuman peril and heartlessness (and you might also feel the breath of passing phantasms on the back of your neck).

There is indeed a nightmarish quality about the entire album, but that feeling grows steadily more pronounced, and the effects steadily more catastrophic as the album proceeds. The third track is persistently tension-ratcheting, with clanging, reverberating bass notes providing a driving, syncopated rhythm. And against that drive, the band provide an eerie surrounding layer of other sounds, some susurating, some pulsating, along with swells of feverish clamoring noise, spectral shimmering, fanfare-like bursts of discordance, and an utterly berserk vocal cacophony.

And all of this leads to the final horrors of the last track, one that makes you feel as if you’ve been cast into the void, met there by a shape-shifting ravening lunacy and then the cold embrace of a haunted crypt. There are sounds here that resemble something inhuman greedily feeding on bones; long, high Doppler-like tones put the teeth on edge; freakish skittering noises enhance the sensations of terror, and there’s a long silence about halfway through, which makes you think the track has ended prematurely.

But it hasn’t ended… there is a last haunting for your mind, a last eerie offering of unease before the silence returns.

The album was recorded by Julien Bous at Postghost Recordings Studios, and it was mixed and mastered by Marlon Wolterink at White Noise Studio. The artwork was created by Samuel Antonin. Pre-order links are below.

3 Responses to “AN NCS ALBUM PREMIERE (AND A REVIEW): MHÖNOS — “LXXXVII””