Gatecreeper’s debut album Sonoran Depravaton was so damned good, a true highlight of 2016 and the source of a song (“Craving Flesh”) that I put on our list of that year’s Most Infectious Extreme Metal Songs. Their EP from last November, Sweltering Madness, was also damned good, a meshing together of dismal, stomping brutality and maniacal, earth-shaking obliteration. And so when I saw that Gatecreeper had released a new song yesterday I nearly soiled myself in my haste to listen to it. 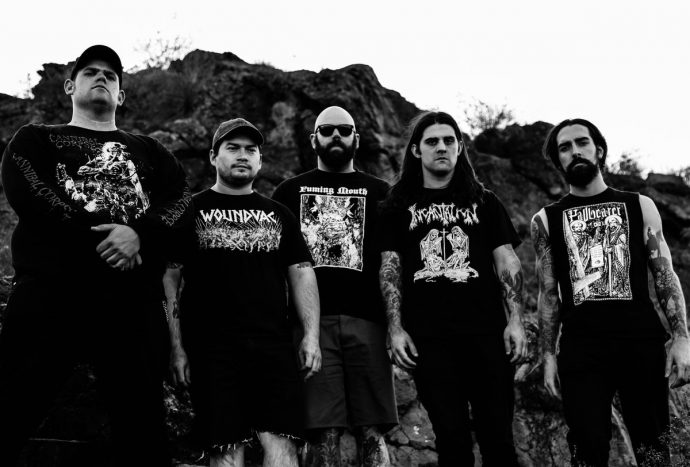 The song appears on a new 8-track split release with Iron Reagan, which was mixed by Kurt Ballou and will be released on March 2nd (CD/LP/Digital) by Relapse Records.

“War Has Begun” is the name of the Gatecreeper song that premiered yesterday, and that’s what it sounds like. There’s a queasy little guitar line at the start, and bits of morbid oozing at later intervals, but the song is just as much an electrifying dose of brute-force jackhammering and horror-strewn rampaging.

P.S. Gatecreeper will be appearing at the second edition of Northwest Terror Fest (presented by NCS, details here) on May 31-June 2, and I’m eager as hell to catch their set there (they will also be at Vancouver’s Modified Ghost Festival III on May 24-27). 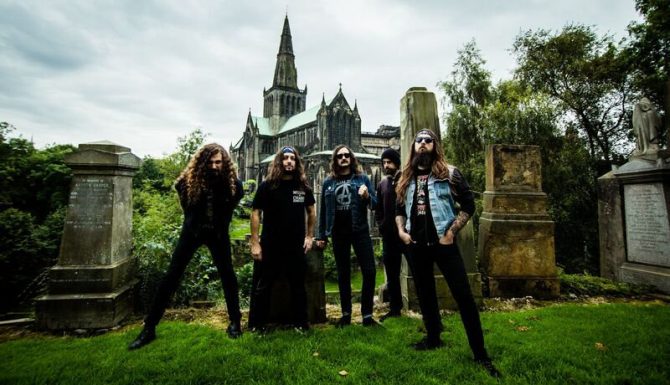 I’ve said before that there’s a certain kind of high-pitched screaming vocalization within the genre of thrash that I’ve never gotten into (to be fair, I’ve never gotten into King Diamond either), and that’s impeded my enthusiasm for Iron Reagan’s style of crossover thrash. But their premiere from the split (“Paper Shredder“) undeniably feeds red meat and potatoes to the slavering masses at a full-throttle pace. That riff that kicks in at 0:55 is pure headbang fuel.

The split is available from Relapse HERE or via the bands’ Bandcamp pages. 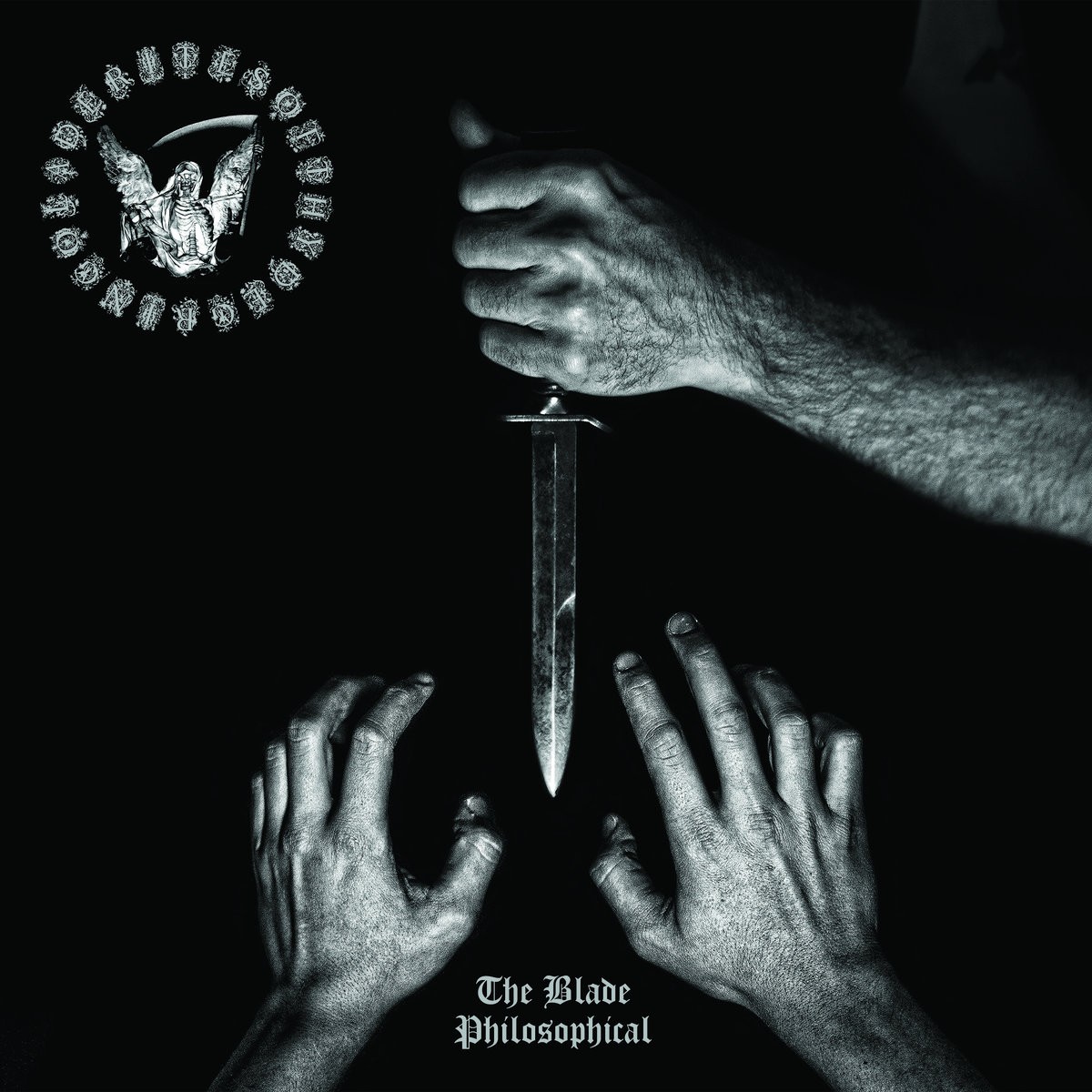 RITES OF THY DEGRINGOLADE

After a hiatus of more than a decade, the influential Canadian black/death band Rites of Thy Degringolade returned in 2016 with a limited number of live performances, and I was lucky enough to catch one of them at California Deathfest (described here, along with video and pics). A cassette single (“The Universe In Three Parts”) was available at those live shows (it’s now available digitally on Bandcamp), and last year Nuclear War Now! released a Rites compilation album named Arch Spatial. But now we’re about to get the first new full-length since 2005’s An Ode To Sin.

That new album, The Blade Philosophical, will be release on March 15 by Nuclear War Now!, and one track can now be heard on the Bandcamp page for the album. “The Final Laceration“.

The song is intricate, unpredictable, and technically impressive enough to drop jaws and pop eyes, but it has a vicious and maniacal quality in addition to being a head-spinner, and the mix of clean and savage vocals works quite well. This is a hugely promising herald for the new album. 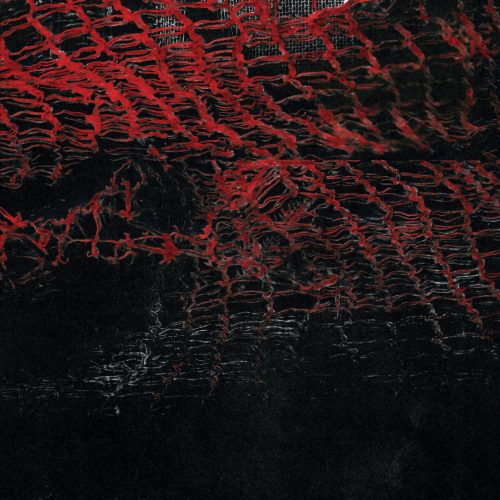 I’ve seen Knelt Rote perform live on two occasions. The last time was at the 2015 edition of Maryland Deathfest. Their set was a blitzkrieg attack, absolutely crushing in its power and riveting in its energy. For me, they took the crown that year for best black/death abomination. They were followed on stage by Portal, and the combined effect on me of both bands resembled PTSD.

I was reminded of Knelt Rote not long ago when Brendan Sloan (Convulsing) reminisced about them in his year-end list for NCS, while praising last year’s album by american (“There once was a great noisy grindcore band called Knelt Rote, and I was worried that I’d never hear anything as perfectly synergistic again after their activity slowed.”). And yes, their activity did slow — their last release was 2012’s Trespass. Metal-Archives lists them as “split up”.

But the reports of their demise appear to be premature, because now there’s a new album headed our way. Or perhaps this is something left over from a time when they were a band. Either way, Alterity is most welcome.

The song you’ll find below is “Genetic Memory“. It’s a breathtakingly ferocious, howling and roaring maelstrom of death/grind violence, laced with freakish dissonant arpeggios and a dose of punishing groove as well. Very excited to hear the rest of this album-length assault.

Alterity will be released by Nuclear War Now! on February 28th. 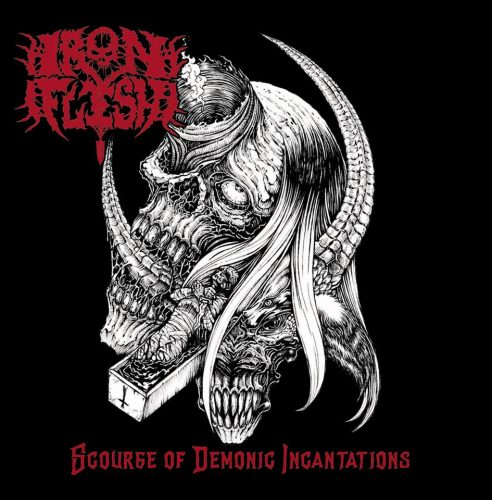 We interrupt the cavalcade of rapacious noise (but only briefly) for a welcome news item. Thanks to my comrade Andy Synn, I’ve learned that the Bordeaux-based old skull death metal band Iron Flesh have a new EP headed our way, fronted by the deliciously gruesome artwork above. Entitled Scourge of Demonic Incantations, it will be sprung upon us on April 7th, and includes these songs:

1. The Nameless Fog ( Magnum Innominandum )
2. The Call of the Ancient One
3. Obscure Paranoid Visions
4. Demonized Nation
5. Consumed by Fire

My friend Andy reviewed the debut Iron Flesh release, 2017’s Worship the Necrogod, praising it as “a nasty conglomeration of filthy, old-school riffs, gruesomely guttural vocals, and harsh, rusty hooks that should please fans of Autopsy, Grave, and early Hypocrisy no end”. That was indeed a hell of an EP, and thus we have abundant reasons to look forward to this new one.

For further details, watch these spaces: 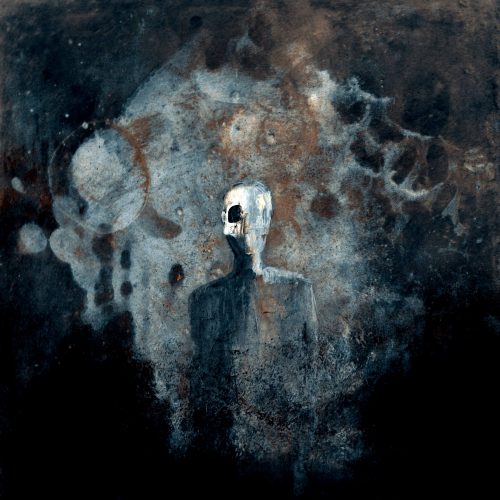 Please allow Prof. Islander too conduct an experiment with your brain. We’ll be putting it in a special centrifuge along with ball bearings, rusty nuts and bolts, a pair of male wolverines bent on trying to kill each other, mandrake (or another available deliriant hallucinogenic), a small amount of plutonium, human arterial blood (used as a lubricant), and the anguish of recently orphaned children. And then we’ll set the chamber whirling at variable speeds approximating those of an African swallow and an engorged python.

If for some reason you’re unwilling to part with your brain for this experimental research, we can achieve something of the same experience by getting you to listen to this new EP by the Norwegian band Eeviomorfia, the name of which is Sublime Saudade. It was released by Incodex Records on January 1.

All kidding aside, this EP — which proves to be a single 16+ minute song — is an avant-garde black/death head-twister of a high order, an intricately braided composition of technically impressive twists and turns, made of strands of eerie, lunatic dissonance; wild vocal barbarism; jet-speed percussive violence; no-warning changes of pace that lead into slow, spooky, narcotic meanderings; and more. It’s a disturbing, hallucinatory, and completely fascinating trip.

If you like what you hear, check out Eeviomorfia’s first EP, Mortal Lacuna; I’ve included that stream below, too. Sublime Saudade is available digitally via the first Incodex Records link below. By the way, I have no idea who is behind this band, but whoever it is has some mad skills.

(Thanks to starkweather for recommending this madness.) 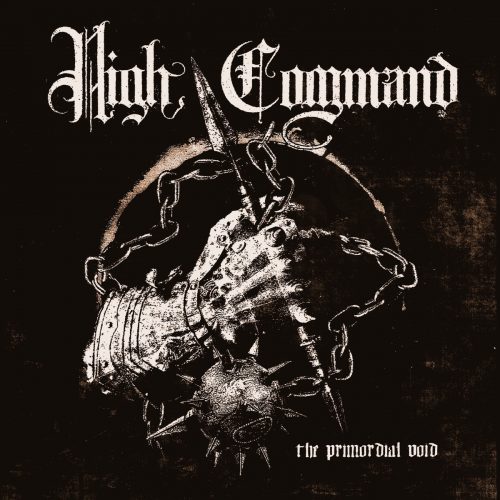 If you haven’t heard High Command’s 2016 debut EP, The Secartha Demos, you REALLY SHOULD. To quote myself from this piece (because if I don’t, who will?):

“The whole EP is made of juicy riffs and body-moving rhythms. It’s a powerhouse dose of crossover thrash that’s thoroughly galvanizing when the pedal is to the metal, and hits hard enough to rupture organs in the mercilessly grim slower sections… The vocals are scraped raw and thoroughly pissed off, and the searing solos come out of nowhere like someone opening the fuel line on an acetylene torch… These songs are so damned good that I can’t imagine any true metal addict not slobbering over this EP.”

In addition to listening to that demo, you should also listen to the new two-song EP by this Massachusetts band, The Primordial Void, which premiered at DECIBEL and was released just yesterday. Guitarist Ryan McArdle told DECIBEL, “The Primordial Void is the product of us going into the Paincave [Studio] with every intention of recording the sonic equivalent of a mushroom cloud.” Mission accomplished.

Both songs do have an immense, powerful sound; both include epic-level riffing and high-octane soloing; the vocals in both still sound completely rabid; and both are as viciously catchy as they are remorselessly murderous. Damn, this band is GOOD. I stand by what I said before: I can’t imagine any true heavy metal addict not slobbering over this music.

The Primordial Void is available at Bandcamp; a 7″ will be out in February 2018 on Haftvad Records. 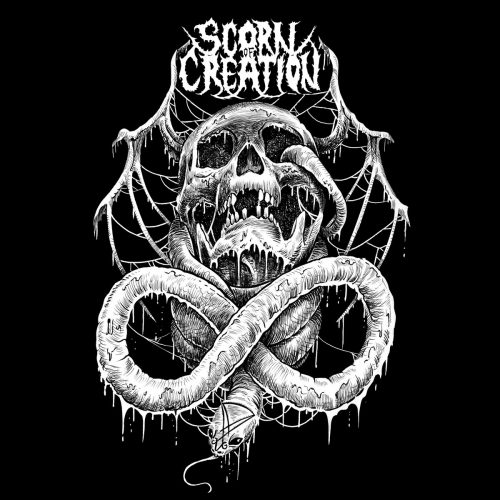 Scorn of Creation are a New Zealand death metal band with a seasoned line-up and a self-titled debut album that’s due for release via Deadboy Records on February 2nd. It includes guest vocals from Carnal’s Dan Birrell and Bulletbelt’s Joelene Tempest.

I’ve been impressed by the album’s first single, “Realisation“. It has a cannibalistic old-school death metal flavor, with monstrous vocals and the kind of sinister, buzzing riffs and shrieking solo work that proves to be electrifying. Short, but sweet.

Scorn of Creation is available for pre-order on iTunes and on vinyl and CD from Deadboy. 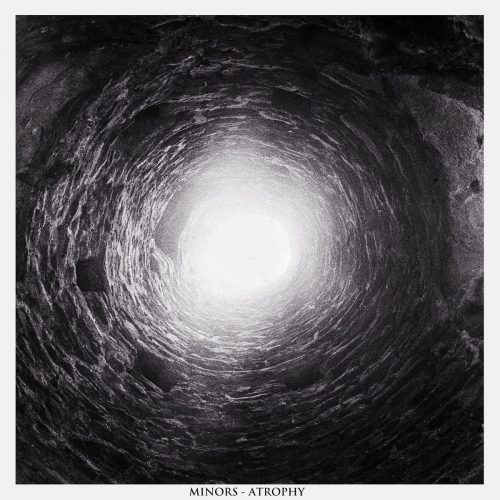 This is a last-minute addition, which I learned about through a Facebook post by starkweather (again!), which I’ll quote:

“Minors… is this affiliated with Column of Heaven or Iron Lung? Whatever the case, absolutely burly electronics infused powerviolence. Bass tone is ridiculous, as if amplifying sagging high tension wires in the wind. If there were any justice, this post would meet the same enthusiasm as yesterday’s Knelt Rote announcement. Holy Roar Records has sold out of the vinyl release. Scour the distros and discogs for physical. Digital damage here: https://weareminors.bandcamp.com/album/atrophy-2“

Minors come from Windsor, Ontario. The release in question is Atrophy. It was released on December 15th. I listened to it once this morning, and to what starkweather said I’ll add only this question: Have you seen my mind? I seem to have lost it.

And a warning: This is fearsome, hopeless music capable of making strong people cower in the corner. 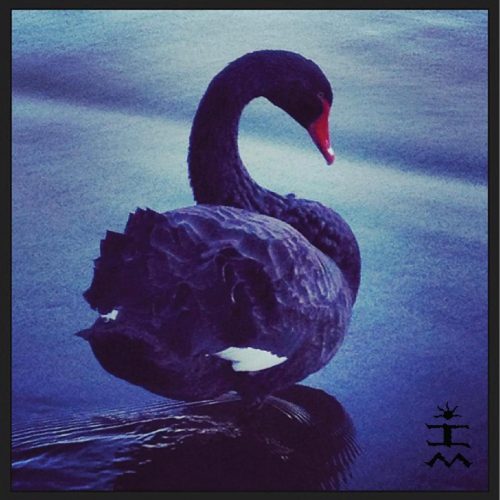 Unlike everything else in this SEEN AND HEARD collection, the following song and video won’t maul your mind, try to pull your limbs from their sockets, or attempt to eat your intestines from the inside out. It may, however, prove to be enthralling.

This is a single named “Technical Disabilities” from the self-titled debut album by a Nebraska-based instrumental band named Schiermann — which has been the solo project of guitarist Chris Schiermann, although as you’ll see in the video he’s joined on this song by Tesseract bassist Amos Williams and by his very talented son Zach on drums. All three of them do a killer job.

It’s been a while since I last got into this kind of technical, prog metal — maybe as long ago as the debut album by Animals As Leaders. But I do enjoy this song, which is complex and technically challenging yet loops back around on itself in ways that stick it in the head.

(Thanks to TheMadIsraeli for tuning me into this video.)