The next three songs I’m adding to my list of Most Infectious Extreme Metal Songs today have a couple of things in common despite their stylistic differences.

The first is that I picked more than one song from the 2017 releases that included them as candidates for this list — and I had a devil of a time deciding which track to include here (since one of my self-imposed rules is not to include more than one track on the list from any particular release).

The second is that I get a glorious and warlike vibe from all three of these songs, and so it just seemed right to me to join them together, like a mini-playlist. Whether they would strike you that way, I don’t know, but regardless, I hope you enjoy them as much as I do. 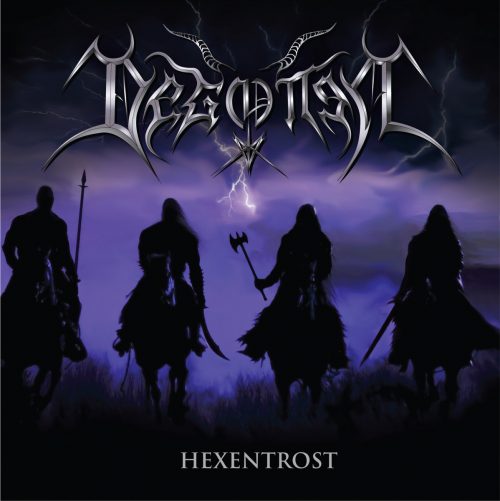 Hexentrost, the debut album by this band from Valdivia, Chilean, proved to be one of the biggest and best surprises of 2017 for me. As I wrote in my impulsive review, the music “is an incredibly electrifying, head-battering, and gut-punching variety of black thrash and speed metal, mixed with pure, Grade-A, ‘classic’ heavy metal”.

“The technical skill on display is out on the fringes where the demands of pure speed and dexterity would leave most musicians just giving up and sadly shaking their heads; these dudes live in the rocket zone quite comfortably. The soloing alone is enough to pop your eyeballs from their sockets and bounce them around the room like ping-pong balls. I strongly urge you to check out ‘Show No Remorse‘ if you do nothing else with this album, just to marvel at the soloing”.

Hexentrost really is an absolutely stunning album, a chain of jewels in which there is not one weak link, and as I mentioned above, I had a fiendishly difficult time deciding which track to put on this list. But “Show No Remorse” barely edged out the other candidates.

Unlike that Degotten album, Rebel Wizard‘s latest EP didn’t take me by surprise — I already knew how damned good this Australian one-man project was. The surprise would have been if The Warning of One had been a drab thing, but of course it wasn’t.

I spilled many words of praise for the EP, and I’ll repeat here: If you have a taste for the kind of creativity that turns out music which is off of metal’s most familiar beaten paths — or perhaps I should say, music that creates intersections of well-loved pathways that usually diverge — the EP is one that shouldn’t be missed.

All four songs on the EP are winners, but after much wrestling with myself I settled on “One I Know” for this list, which I described in that review as a “jolting juggernaut” — “wrenchingly intense, edged with a sense of brooding, but also gloriously vibrant, with the kind of grand melody that conjures visions of mythic Norse warriors riding to battle beneath wind-whipped, sunlit banners”.

Woe’s 2017 album Hope Attrition got its fair share of applause in year-end lists across the web, and with very good reason — because the whole alum is really good, from beginning to end.

The first song I heard from the album, because it was the first single revealed in the run-up to the release, was “No Blood Has Honor“. Maybe for that reason, it has stuck with me the hardest, but there are other reasons.

With Lev Weinstein on drums, that part of the song is predictably riveting, but everyone else is firing on all cylinders, too. It’s fiery, frenzied music, but intricate and fascinating as well. Wait ’til the lead guitar leaps into your head at 0:45, and be prepared to have it spear your head repeatedly as the song rockets forward.

If you’ve read the song’s powerful lyrics, you know they’re not warlike or glorious in the emotions they reveal; there is instead a mood of desolation, and perhaps rage, that runs through them. Yet to me, the music itself has both qualities, along with feelings of pain and grief. And of course, I think it’s damned infectious.