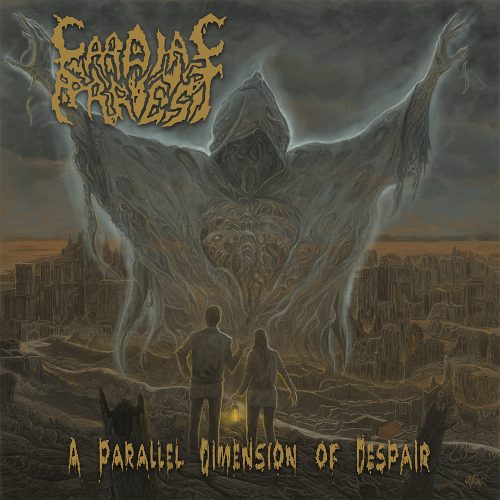 All good things must come to an end, and so I must end this Tuesday torrent of tumultuous sound in order to pay a small amount of attention to the rest of my life. If you’ve managed to make your way through all four parts of this round-up, congratulations on your fortitude and thank you (and I’m sure the bands would thank you too), but I assume no responsibility for the cost of medical treatment for your eardrums.

In this final chapter, I’ve ranged far and wide in genre terms, perhaps more so than in the previous chapters. Buckle up for a swerving ride.

Songs like “It Takes Form” make me feel like Pavlov’s dog at the sound of the dinner bell: I start salivating uncontrollably. This kind of utterly morbid but powerfully electrifying vintage death metal, composed and performed this masterfully, always seems to have that effect. 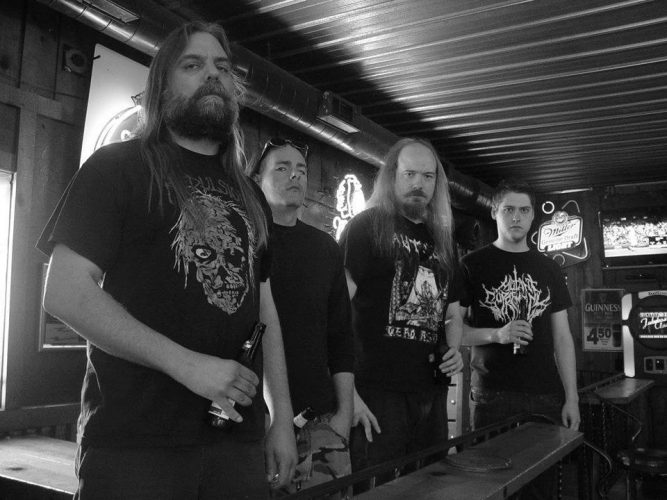 The track comes from the new album by Chicago’s Cardiac Arrest, a band whose roots go back to the mid-’90s. The new one is named A Parallel Dimension of Despair; it features cover art by Juanjo Castellano and mastering by Javi Felez at Spain’s Moontower Studios; and it will be released by Memento Mori on April 23rd.

And yes, this is old school death metal — of a particularly putrid and grinding kind. The deep, drilling riffs are mean as shit; the drum rhythms get a hammer lock on your skull as they pummel in a fury and scamper like a punk; and the vocals are, of course, guttural and grotesque. The song pounds and punches, seethes and swarms, and it includes a guitar solo that’s pure derangement. It’s also powerfully catchy. And with the right kind of crowd, it could generate a mosh pit that would send people to the emergency room. 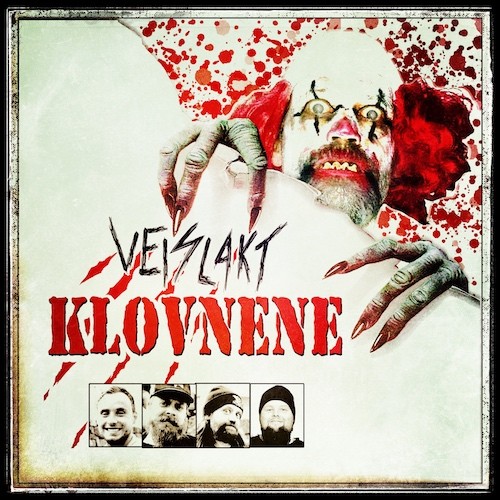 I warned you that this would be a swerving ride, and now we’re taking a sharp turn away from old school death metal and toward something quite different, but quite punishing (and electrifying) in its own way.

This is a single called “Klovnene“, released today by Rob Mules Records, from the forthcoming third album by the Norwegian punk/metal band Veislakt. The album’s name is Sandnes Undergrunn Circus & Kabaret, and it’s described as a concept record, “a tale of an underground circus from the city of Sandnes” — “stories of happiness, tragedy, murders and violent slapstick humor”.

“Klovnene“, in particular is described as “a song that revolves around the three Russian brothers Jurij, Peter and Vlad and their bloody performance of violent slapstick humor”. The music has a battering and brawling quality, with the kind of low-end punch you usually get only by climbing into the ring with a heavyweight fighter, and the kind of full-bore vocals you usually hear at football matches from people who should have stopped drinking before the game began.

And the song just gets more explosive as it barrels ahead, thanks to a flashy, acetylene-hot solo that I wasn’t expecting. And did I mention that it’s catchier than chlamydia? I mean, not that I would know from personal experience. It’s just an expression. But you might want to wash yourself thoroughly after you listen. 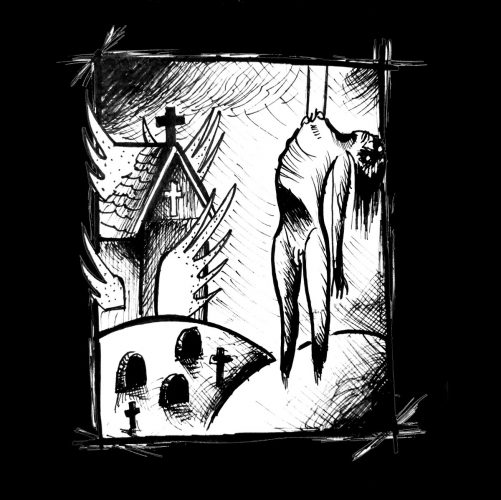 Uhrilahja from Tampere, Finland, wrote to us just this morning (last night in my time zone), to tell us about their new two-song demo, released in late January both digitally and in a limited-edition cassette tape format. I found the e-mail at a time when I could afford to listen right away, to see if it might be something worth recommending to you — and hell yes, it is!

The artwork may be primitive, the band may be new, the demo may represent their first public release, but trust me when I tell you that this trio have impressive talents. Or rather, just trust your ears.

The two songs, “Rite of the Coiling Dragon” and “Svarta Själar“, are eruptions of fiery black metal, complete with a thundering low end, vocals scalding enough to bubble the flesh, and scintillating melodies. The first song is a full-bore, warlike charge with a blend of melodies that are by turns soaring and defiant, and heart-aching. It includes slower, more melancholy (and head-bobbing) sections that feature deep, solemn spoken words and a big bass presence.

The second track is further proof that these folks know how to write melodic riffs and leads that get stuck in the head. This one alternately rocks and races, and moves the mood from fierce heroism, of the mythic variety, to a more somber and reflective pensiveness. There is a sweeping keyboard layer in this track that just makes the heart swell even more (and additional, prominent bass work that really adds to the song’s interest).