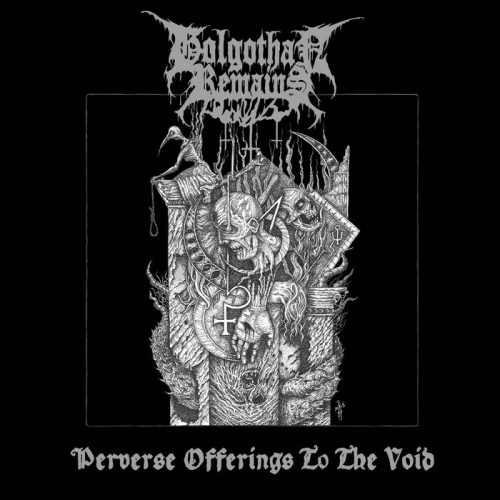 “Vehemence (Through Pain Divine)” opens the album in stunning fashion, with titanic rumbling and booming in the low end, bursts of freakish, swarming guitar dissonance in the upper reaches, and grim grinding in the mid-range, like a bone saw scything through gangrenous limbs. The destructive barrage of sound is segmented by slower cascades of pile-driving brutality. A heartless roaring monstrosity has somehow seized the microphone, venting a tyrannical tirade in the midst of this war zone. 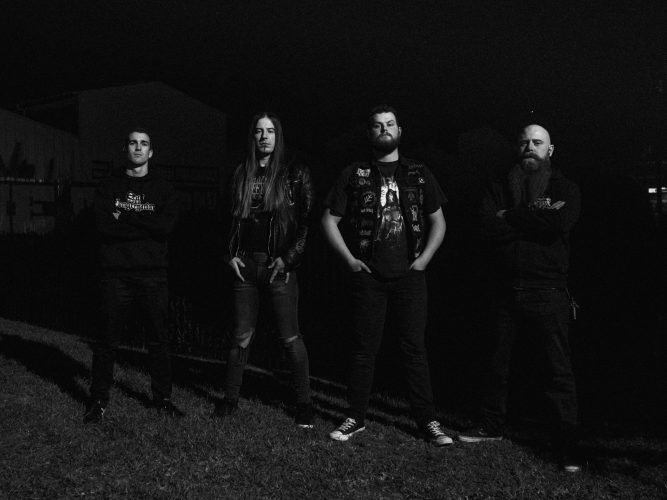 Having set the stage in this fashion, the band proceed to deliver one staggering, mind-abrading attack after another, favoring reverb-laden peals of alien guitar notes and savage, blizzard-like riffs to create an aura of void-faring horror. The group also continue to favor that tactic of puncturing their berserker rampages with start-stop detonations (the drum and bass booms really do sound like bombs going off in spectacular fashion), but the sheer sonic force of the music and its violent intensity is really pretty overpowering at all times. A feeling of catastrophe and terrible grandeur repeatedly rises up and looms over the listener… and then repeatedly pounces, ripping and tearing and mauling in frenzies of frightening power.

The grooves in the music are huge, but the electrifying atmosphere of derangement and chaos is never far away, nor is the chill that comes over your skin in the slower movements, thanks to the queasy, unearthly feeling of the dissonant guitar excretions. It’s a winning formula, and Golgothan Remains don’t stray very far from it on any of the tracks. If the band had chosen to make a marked departure from their blueprint for these blackened death metal assaults, to add a bit more variety and individual character to the tracks, it might have pushed the album to an even higher plateau of achievement. But in the context of this record that’s really a minor complaint; they’re so good at what they’re doing here that I was still rooted in place from the beginning to the end of this white-kuckle thrill ride.

In a word, outstanding. 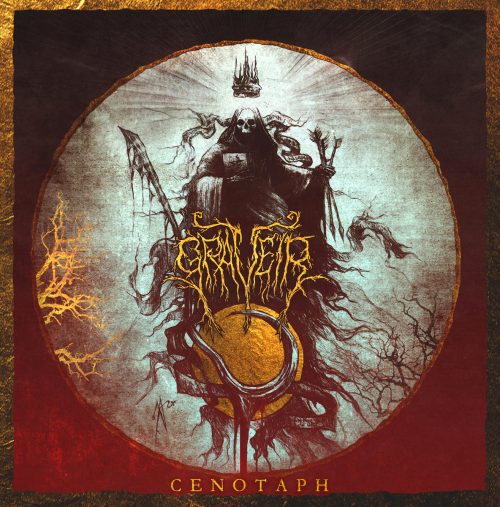 The Brisbane-based black metal band Graveir have already made a strong impression not only with that afore-mentioned split last year with Mar Mortuum, but also with their 2016 debut album, Iconostasis. Their newest work is a five-song EP (nearly album-length) named Cenotaph that Impure Sounds has set for release on April 20, and below you can check out the EP’s opening track, “Sanguine Inferno“.

Like Golgothan Remains, Graveir also deploy dissonance as a weapon in the song, creating a sensation of cold and alien cruelty, while feelings of misery and desolation ooze like congealing blood from the song’s slow melodic through-lines. The drums blast in a fury almost non-stop, which creates a contrast with those melodies and with the slow cascades of sound in the riffs. The contrasts don’t stop there: Matched against the oppressive, depressive atmosphere of gloom in the song, the vocals sound wild and terrifying, filled with hate and ferocity.

Feelings of desolation and devastation are palpable throughout the balance of the EP, although the band do an admirable job of shifting gears within the songs, and in so doing they move the mood from grief to despair to splintering insanity. More than a few doom bands would pay good money for the passages of trudging misery and moaning despondency within these tracks, but Graveir prove that they can also hold their own with their more bloody-minded war-metal brethren in Australia. When they put their mind to it, they can drain the blood from your face with the apocalyptic ferocity of their onslaughts. And for good measure, they throw in some impressively intricate fretwork and some compulsively headbangable riffs and rhythms as well.

Every one of these songs is brilliantly conceived and executed… which makes the full EP well worth the money. But it’s not for the faint-hearted — the intensity is unrelenting.