Welcome to the regular Sunday edition of this column, which follows the irregular one I posted yesterday after failing to complete it earlier as planned. I’ve divided it into two parts because there’s quite a lot of music in today’s post, with six bands and four complete releases in addition to advance tracks from two others that are on the way.

On top of that, the first three of the complete releases include “long-form” songs. All of them are examples of emotionally powerful atmospheric black metal. But after those three I decided to make a sharp stylistic turn (actually, several sharp turns).

P.S.: I’m rarely cool, calm, and collected when writing about music; I only write about what I like and tend to let the words reflect the excitement… and I really like what you’re about to hear.

Two years ago I reviewed and premiered a wonderful album named Waves of Degradation by the Texas folk-influenced atmospheric black metal band Krigsgrav. It was the band’s fourth album but my first serious exposure to their music, and it was a hell of a discovery.

Krigsgrav are far along in their work on a new album, but their former bassist Wes Radvansky, who seems to have parted ways with the band since the last Krigsgrav album, has his own solo project, the name of which is Midnartiis. 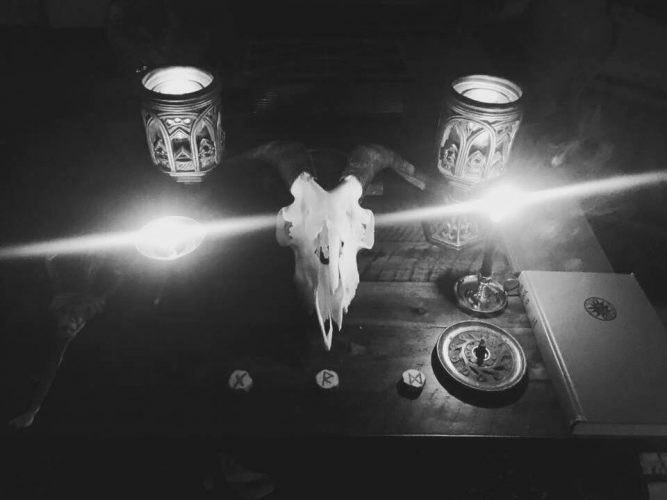 Last October Midnartiis self-released a second album, With Reverence and Will​.​.​., and although I wasn’t aware of it then, I know about it now because Naturmacht Productions will be releasing it on CD on March 18th, and has already made it available again as a digital download.

The first song of this album, “The Black Orchard“, is a fantastic opener. It’s so good that, to borrow an expression from my friend DGR, it’s almost a barrier to entry into the rest of the album. I got so stuck on it that it took me a while before I even made it to the second track.

That song begins with an extended instrumental introduction, a distorted guitar harmony that’s both abrasive and bright… and entrancing. And when the song unfurls in full after that, it becomes even more mesmerizing — steeped in sorrow, but sublime. An acoustic-guitar folk melody provides a bridge to a more surging intensity, and the song grows increasingly panoramic and grand in its gloomy vision.

In the interest of keeping this post from turning into a book-length piece of reading, what I’ll say about the rest of the album — which is quite substantial in length — is that it proves to be just as gripping as “The Black Orchard”. Midnartiis has a gift for crafting emotionally evocative melodies, both melancholy and heroic, that you remember, a talent for astutely varying the moods and tones (along with the pacing and intensity), and a facility with both electric and acoustic guitar (and other instruments) that’s impressive.

There’s not much variation in W.R.’s vocals (a persistent caustic howl) until you get to the haunting fifth track, where he breaks out deep, somber clean vocals, along with flute and fiddle melodies. I should mention that the album’s centerpiece, the long and astonishingly good title track, also includes gorgeous violin accents and soloing, though I don’t know if W.R. or a guest did them. Soulful strings are used to wonderful effect elsewhere as well, and light synth layers add further textures to this rich tapestry of sound.

I think of With Reverence and Will​.​.​. as a kind of distinctively American emblem of folkloric black metal, much as I do of some of Panopticon’s releases, one that scales to almost mythic heights. But I think its brilliance will appeal to listeners from any land. 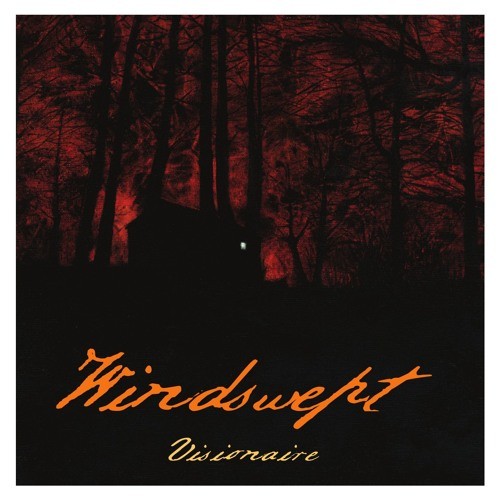 All three members of the Ukrainian band Windswept, including vocalist/guitarist Roman Saenko, are also members of Drudkh, Precambrian, and Rattenfänger. Under the Windswept banner they released an excellent debut album last year, entitled The Great Cold Steppe (from which we hosted the premiere of a fiery song, “Shrouded In Pale Shining, So Sleeps Infinite Ancient Steppe”). Having been a fan of that album, it took about a nano-second for me to jump on the band’s new EP when I discovered its existence a couple of days ago.

The EP is called Visionaire, and it will be released by Ván Records on February 17th (12″ vinyl and CD). But it seems quite different from The Great Cold Steppe. Most obviously, it includes only two tracks, and each one is roughly twise as long as anything on the debut album — “Your Bitter Bread” (15:13) and “The Seeker Will Find” (12:32). As powerfully moved as I was by that Midnartiis album, this EP also picked me up, body and soul, and carried me away.

The brilliant melancholy riff that launches “Your Bitter Bread” over a hard-charging drum and bass rhythm is immediately riveting. It continues to loop through your mind, joined by a sweeping synth layer that further elevates the music’s air of somber drama and lofty, almost mystical grandeur, broken a few times by an ebb in the song’s galloping rhythm and a segue into a slow, heavy, head-nodding cadence — or haunting spaces of no percussive rhythm at all. Your heart would have to be as dead and cold as ice not to swell to the edge of bursting through your chest during this song, even as heart-aching as the music’s atmosphere is.

“The Seeker Will Find” begins as a more grim, raw, and attacking piece, but like “Your Bitter Bread”, it’s built around a penetrating riff that gets its hooks in your head immediately and is strong enough to carry the song for its 12+ minute length. Of course, Saenko introduces artful variations on that central melody, and Windswept vary the pacing just as they do in the first song. And like the first song, despite its despondent and even disconsolate mood, “The Seeker Will Find” possesses the kind of bleak majesty that takes you well out of yourself.

I don’t think it goes too far to say that Visionaire is magical.