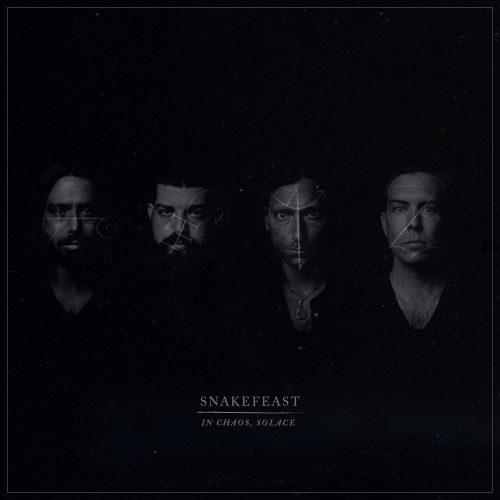 Late last month The Obelisk premiered a song called “Pyre” from the forthcoming second album (In Chaos, Solace) by the genre-fracturing Baltimore band Snakefeast. When I heard the song, my eyes probably couldn’t have opened wider without my eyeballs falling out. The Obelisk’s take on the music seemed on-point:  “a fusion of jazz, metal, weighted-groove grind and post-hardcore, but however many subgenres they may or may not be throwing into their scorching aesthetic melting pot, they’re unquestionably working on a wavelength of their own….”

Having been so pleasantly surprised and bewildered by that track, I jumped at the chance to bring out another premiere, a song called “Itch” that’s just as boisterous, as disruptive, and as captivating as “Pyre”.

Snakefeast operate without a guitar, and they clearly don’t need one. What they have instead is a trio of creative, razor-sharp musicians and a throat-shredding wild man behind the mic. Those three musicians are tenor saxophonist Aran Keating, bassist Carson Korman, and drummer Dave Cavalier (who is also guitarist/vocalist for Baltimore’s Black Lung), and the insane, flesh-scarring voice belongs to Phil Doccolo. About this new album, the band has commented as follows:

“We used to be a three-piece with intermittent saxophone, but now the saxophone is a key part of our sound and composition. We started treating the sax like a vocalist, and the vocals as more of a textural element. We’ve always sought to combine jazz and metal aesthetics and continue to explore new ways to achieve this through our choice of instruments and song structures.”

“Innovative” is certainly a word that accurately applies to what Snakefeast are doing, and “Itch” is a prime example of their distinctive creativity. A moody saxophone solo launches the song, introducing a melody that threads its way through the track in the midst of lots of head-spinning twists and turns. All the performers turn in riveting performances, and the song has an explosive energy, which hits you right away when a big, tumbling drum rhythm and a serpentine, swarming “riff” follows that somber intro.

The drums batter, the bass booms, and you begin to feel an air of madness mixed with bleakness in this brawling endeavor. But even after what has come in the song so far, it’s still a big (and eye-popping) surprise when Snakefeast shift into an intricate and exuberant instrumental interplay before moving to a jolting, head-spinning finale.

In Chaos, Solace will be released March 2nd on limited-edition CD and digital download via Grimoire Records, and it was recorded, mixed, and mastered by Grimoire’s Noel Mueller. Dive into both “Itch” and “Pyre” below.