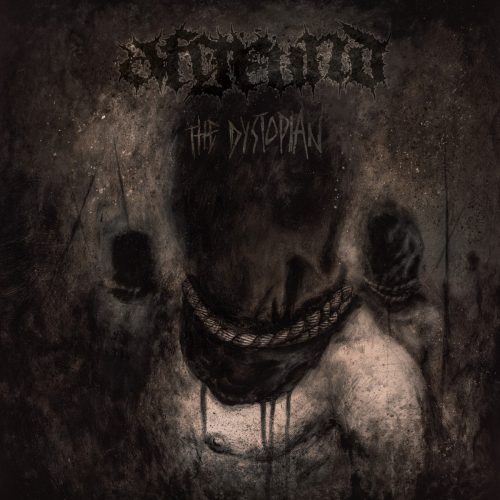 (We present DGR’s review of the new album by the Swedish/Finnish trio Afgrund, which was released last month.)

There’s already been a couple of victorious return-from-the-ashes releases so far in 2018, and one of the earliest — after a long period of silence — was on January 5th, courtesy of Swedish/Finnish grind collective Afgrund.

Still somewhat embroiled in a dispute with others in their history over who owns the name has resulted in potentially two versions of the band existing. The three-piece group presented here consists of founding and long-time members Andy, Pat, and Panu, who among the three of them were with the band in one form or another from their first releases up to the 2012 album, The Age Of Dumb. On January 5th, this group returned under the Afgrund banner with a new album, eleven tracks jammed into a little over twenty-three minutes, delivering a dark and pessimistic fiery blast of grind-and-punk under the title The Dystopian.

The Dystopian feels like Afgrund returning home in more ways than one, not only because the lineup consists of founding members but also in the way The Dystopian moves and what it consists of. It sounds like Afgrund knocking down all of their old favorites all over again, reaching into a comfortably familiar bag of tricks in order to dispense high-speed blasts and yells about the world of today. The Dystopian is Afgrund performing a delicate balancing act, viewing the world through a current lens yet throwing themselves back in time in order to effectively restart the band. 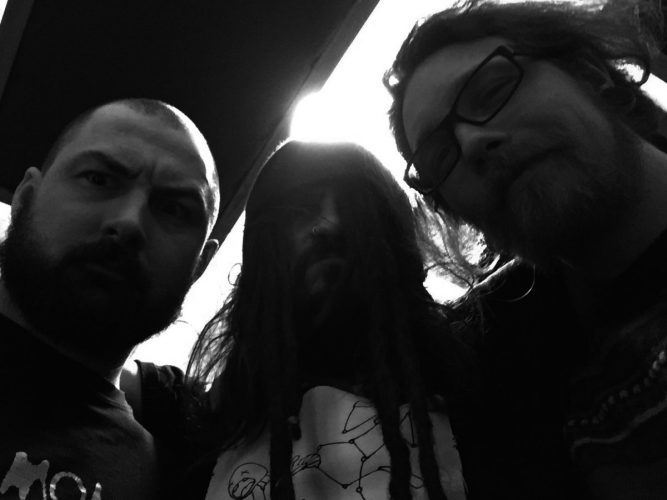 The album is obsessed with the end of the world. As a grind disc, it paints a very bleak picture of the current state of humanity while also harboring an obsession with the weapons that could destroy us all. It’s a familiar take, one with which Afgrund have played before, including tackling the socio-political landscape as it exists, but suitably darkened for today’s modern climates and tastes.

The Dystopian also has Afgrund breaking out some old favorites. The songwriting style places the album as the bleaker sibling in between 2007’s Svarta dagar and 2009’s Vid Helvetats Grindar, but in its sample usage it also pulls from many old grind-genre favorites, which means that I’m now on my third or fourth album that has Oppenheimer’s “I Am Become Death” quotation within its musical landscape, along with a handful of other familiar samples.

But the band also find plenty of sources from our current landscape to sample from, including (and in keeping with the nuclear annihilation theme that underlies all of The Dystopian) Trump’s “fire and fury” blathering, and a real fun one touching on the spectre of white domestic terrorism during the opening of the punk-charged “Crossfire Agent”. The band have touched on that subject before during previous releases, but this time through a more straightforward lens. What’s the point of trying to hide a message in metaphor this time around?

If you’re looking for a more d-beat flavored track, Afgrund have that as well in “Callous”. Coupled with the track following it, “Royalty Of Crust”, and the aforementioned “Crossfire” after that, you have a massive block of pit-riffing tracks to help break two incredibly heavy bookends.

That said, Afgrund find plenty of mileage in their bread-and-butter blast-beat destruction method. Not every song is as high-speed as some have been on previous releases, but most of the eleven songs on The Dystopian justify the album only running a little over twenty minutes, because it moves at a relentless pace. Afgrund know how to unleash absolute fury, and do that multiple times on the album. The fact that it feels like they’re cycling back around to subject matter they’ve addressed before is probably more a pathetic statement about our current society than anything else. That a genre is able to mine a certain landscape and still find the same things bubbling up to the surface shows how little we’ve truly accomplished.

For the more nihilistic among the tracks, Afrgrund have “(Yet) Another Way To Kill”, “Re-Exordium”, “Limitless Source Of Power”, and especially “Archaic Plague”. Basically, if Afgrund aren’t spending their time with a massive groove on The Dystopian, they’re using a multi-pronged vocal attack layered on top of some lightspeed-fast grinders, with the guitar pulled way out in front of everything and with enough echo present to fill the caverns of hell. The Dystopian moves very quick in its opener, takes its circle-pit-riffer break in the middle for a handful of minutes, and then kicks things back into high gear to close everything out.

There is a sense of familiarity in the way the album moves, though. It’s dark and apocalyptic for sure, but it also feels like the most “Afgrund” that the band have been in some time. Returning the line-up to founding, long-time members tends to have that effect, as that reunites songwriting talents that helped forge an early version of the band and built on it from there. In that way, The Dystopian looks backward in order to move forward. It is Afgrund well within an admittedly dark comfort zone, yelling at the world about the state of society and checking off plenty of grind staples along the way. As a long-time fan, seeing the band back and as furious as ever is delightful, mostly because the group are well primed to take a look at the world as it is now and mine that awful subject material for years to come, hammering blasts and fiery guitar work around all of it.

The Dystopian closes with one of its heaviest and darkest songs, the swaggering “Demise Strategy”, which shifts between a grooving main verse-riff and an almost black-metal buzzing-guitar-and-blast section, giving the song a constant thrum while portraying a world that slowly crawls to a halt in its final, labored breaths, the song itself slowing down to one final gasp before ending the record as a whole. It is one final parting shot at the listener from an album that does not have a good view of things to come. It is the only way the hellfire songwritng of The Dystopian could have closed, and an excellent way to know that Afgrund have returned.

2 Responses to “AFGRUND: “THE DYSTOPIAN””