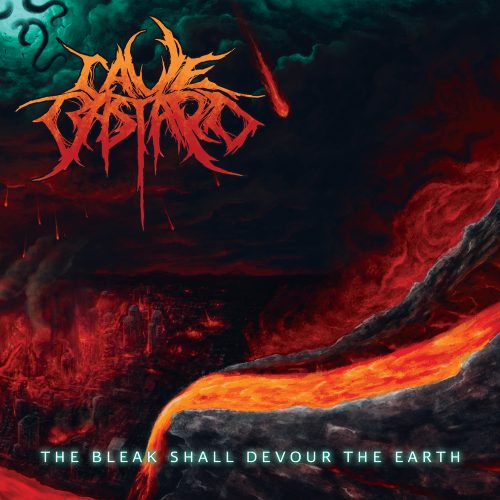 Are you sitting down? Have you got a firm grip on something that’s solidly anchored to the floor? Is your crash helmet in place, and some kind of bit between your teeth so you don’t bite off your tongue? If so, you’re probably good to go on this new song, but no guarantees. If not, call 911 for an ambulance before you press Play — because “Massacre Reaction” is pure audio murder, like a combination of riding an electric chair and being hit by a rushing freight train, or perhaps more appropriately, like being at ground zero in the crosshairs of a carpet-bombing campaign.

Perhaps there’s a slight exaggeration in those words, but not much. What Cave Bastard have pulled off on “Massacre Reaction” is genuinely electrifying, and stunningly brutal. The song comes from this San Diego band’s debut album, The Bleak Shall Devour The Earth, which is set for release by Accident Prone Records on March 23rd. 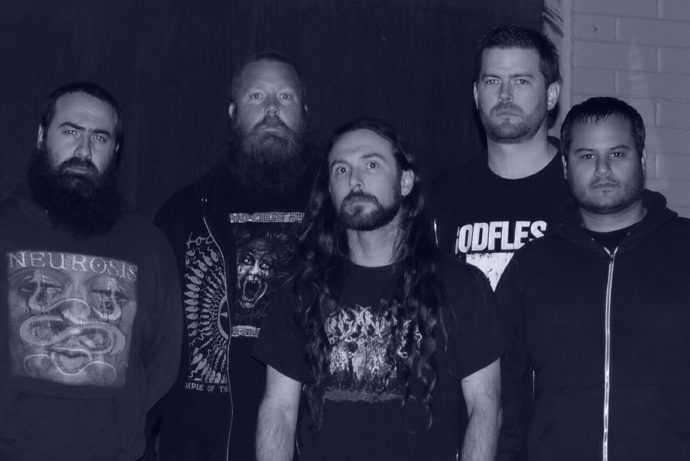 Cave Bastard’s line-up consists of former or current members of such bands as Cattle Decapitation, Gutrot, Ritual Torture, Bridge Jumper, and Temblad, and they’ve clearly honed their skills well. They also seem to have built up a powerful fury over the three-and-a-half years they spent working on this album, and then funneled all of it out in a violent torrent through this explosive record.

The following comment about the song we’re premiering here is worth reading — and it will make even more sense when you hear the music:

“The inspiration behind MASSACRE REACTION is what has been an ongoing occurrence over the last 70 years carried out by the United States government: bombing campaigns abroad. The idea of a chain reaction of massacres; each one complimenting the last in a never-ending cycle, and the effects of such mass carnage of those who suffer from it. The insane idea that a small group of people can decide who dies in massive quantities in other parts of the world seemingly at the same time in hopes of curing a problem, hence the line that appears in the song, ‘Decide who dies; consequence of ignorance; Massacre Reaction: Bombs Away!’ It’s understood that’s been a part of modern warfare for as long as it’s existed, but even more incredible and appalling that the US has bombed at least 7 countries we are not at war with over the last 10 years with no end in sight.”

It’s an intense subject matter for this song, and the music matches that intensity. The drumming itself sounds like a sequence of high-speed explosions; the riffing resembles heavy-calber automatic weaponry; the chords blare and pulse like an air raid warning; the blood-red vocal ferocity is staggering. And that’s all just part of what happens in this track.

It also includes eruptions of tumbling percussion, fiery twisted fretwork (that still has a pulsating quality to it), huge jackhammering rhythms (when all the instruments lock in together), python-thick groaning melodies, and a particularly extravagant detonation near the end that becomes the overture to an eerie arpeggio, chiming above the rumble and hammering of a juggernaut drive. 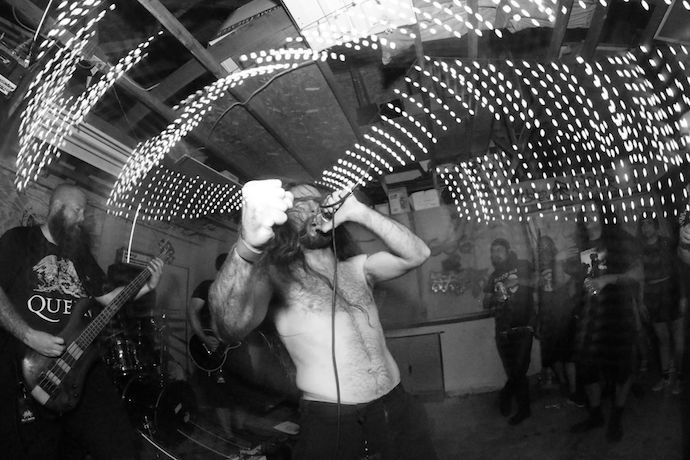 This song is a great way to introduce an album of truly staggering power. The record was recorded at Audio Design Studios in San Diego, recorded and mixed by the great Billy Anderson (Neurosis, Brutal Truth, Cattle Decapitation) with assistant engineer Jordan Andreen, and mastered at Trakworx by Justin Weis. The vibrant cover art was created by Varises Otak.

Pre-order via the link below.

One Response to “AN NCS PREMIERE: CAVE BASTARD — “MASSACRE REACTION””