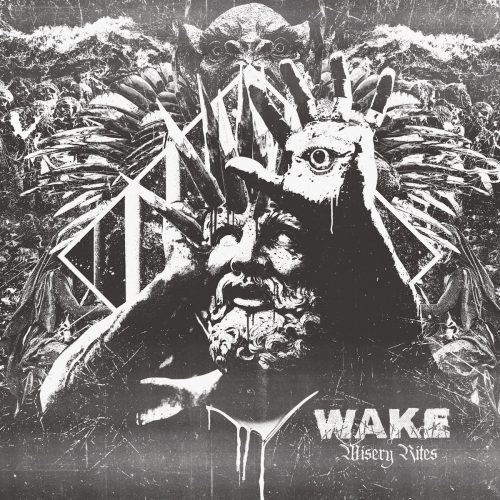 (Here’s DGR’s review of the new album by Wake from Calgary, Alberta, Canada.)

Some albums take a while to review. On a personal note: I’ve always been the type to really want to listen to a disc a ton, really learn what each song is about, how it flows, get a general sense of what informed the disc, before writing about it.

Going from a first glance often feels like criminally short-changing bands sometimes, although by that same token the first impression can also be an immensely valuable take on things in a world where time is incredibly limited, and some — like many of our readers here, given the constant refrains about how much music we post — have limited listening time. So it doesn’t hurt to have a sense of immediacy in the delivery.

And therein lies the opposing side of the “album that takes a while to review”. You have the ones that are so up-front, so immediate, the kind that grab you by the throat and ragdoll you around the room so quickly that you can’t help but almost immediately lock-in with the group’s chosen sense of ferocity. The urgency with which the material is delivered becomes the driving force behind it.

Those album’s don’t take nearly as long, because as a listener you can recognize every aspect and every weapon deployed from moment one, and from there the experience becomes more about how a band uses them and with what amount of lethal auditory force. And that brings us to the recently released Misery Rites, by Canadian noise-heavy grinders Wake. 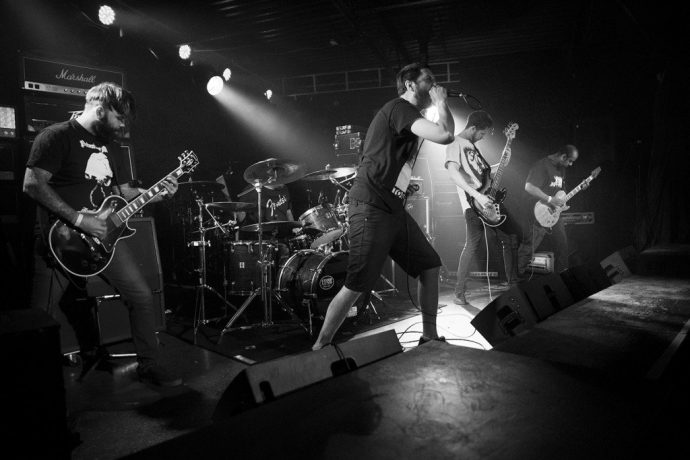 This is a disc whose high-speed exercises in misanthropy become recognizable from its opening blasted-to-oblivion refrains, and while the general “holy fucking shit what the fuck is wrong with everything” feel of the juuuuust a bit outside of twenty-seven minutes of Misery Rites is recognizable, goddamnit is it good.

Misery Rites begins as it ends — fading in and out of sound — so that it loops back around on itself. The beginning segment of Misery Rites‘ opener “Exhumation” and the closing bits of ending song “Burial Ground” blur into one another, bookending an experience that is otherwise relentless in its approach to high-speed noise grind.

Wake envelop themselves in a wall of blasting drums and noisey guitars (doubled over multiple times, other times seemingly on completely different paths so as to maximize the chaotic sound), so that it becomes increasingly hard to grasp onto a song at any particular moment; each track is more an exorcism of overall sound and an excuse for vocalist Kyle Bell to roll at the drop of a dime between a repetoire consisting of high, shrill shrieks and lows  — matching the spastic nature of the music as a whole.

You can’t let the (relatively) unassuming album art of Misery Rites and the band photos fool you. It is a speedier grind album that has death metal song-lengths, and the listening experience comes off like being thrown in a tumble dryer in the abyss — it’s recognizably mean from front to back.

The chaotic and spastic nature of Wake has been ripping through the underground scene for a little bit now — the railing on guitars propelled forward by blast beats with only the briefest moments of quiet to survey the surrounding devastation — seeing them comfortably straddling a line between grind groups and the more punk- and hardcore-flavored powerviolence bands, the shrill nature of Wake’s delivery drawing direct comparisons to groups like Teethgrinder throughout Misery Rites.

Sometimes that’s what you’re looking for in music, though — an encapsulation of a mood spread across a handful of songs, the quick blast to the system, and in Wake’s case, one that sears its way across the listener’s brain in the span of a tad bit over twenty minutes. It is surgically fast and targeted; adrenaline rush as an art piece.

You get the sense throughout Misery Rite’s various expulsions of sound that it is purely cathartic and meant as a form of a release. Whatever bothered the band at the time became the inspiration for the next session of bashing the hell out of everything and howling over the top of it.

“Embers”, for instance, starts out like it is crawling out of the void before the band start throwing themselves around from one maelstrom of notes to the next. “Rot”, the following track, continues the overall feel of the opening song but rings a little clearer in its sound. The songs on Misery Rites spill into one another constantly, giving it the feel of being one coherent piece, and with the previously mentioned loop back around, a reference to the cyclical nature of Wake’s brand of noisier chaos.

“Paradigm Lost”, “Exile”, and “Rumination” make for an incredibly vicious three-piece mid-way through the album and they all pour forth into “Bitter Winter”, whose two and a half minutes still manage to stun with just how explosive it is, even in an album where, by that point, violent explosions have become the new normal.

That impact may be partially due to the fact that “Bitter Winter” slows down a bit, which is something Misery Rites doesn’t really give two shits about doing too often, until the seven-minute closer of “Burial Ground”, which is the one time when Wake really wallow in the bleak landscape they’ve created for themselves.

Misery Rites makes a friend of its noise-filled void during its brief existence. Wake bash out nine songs in quick fashion and then immolate the whole affair by the time the last song wraps up. It is partially album, partially rage-filled mood. And despite the fact that it has a song called “Rumination” on it, the record spends no time devoted to that, choosing instead to go for the sheer destruction route, the band building from song-to-song up to the final slowdown and that misery-warped closer, “Burial Grounds”.

The final minutes of Misery Rites are a humming mass of vague, non-descript sound, the sort of thing one might expect to hear when a landscape is leveled before you — when the world takes on the shades of black and grey that the Misery Rites album art consists of.

Misery Rites is a chaotic tumble of an album, one that has a lot to say and chooses to do so in a fashion as fast as the thoughts occur to it, meaning that more often than not, Wake are whaling away on their instruments, and the only grasp a listener might have in that propellant hailstorm is on the manic vocal delivery.

The album is also one that doesn’t ask much time of you, so if you’re seeking one of those discs that rolls in with the true force of a salt-the-Earth campaign and leaves nothing in its…wake… then Misery Rites is a good choice.