Since this is happening, I will more than happily bear the yoke of having to deliver the much needed metal news to the world that we might’ve missed, given my general job title of news pelican here, in between whatever else the rest of us who couldn’t go to Iceland have on the docket – which is looking mighty packed – and the general scribblings of the crew in attendance at the show.

Such is my burden; I have been collecting the articles you see before you over the past few weeks, stuff we might’ve missed, stuff we really want to talk about, and stuff that unfortunately we just didn’t have time to cover right away since we had an increasingly packed few weeks full of song premieres, overly long reviews, and editorial work.

Of course, that means that some of this is likely going to be ancient to a few of you folks, like something we might imagine Indiana Jones was carrying while running from a boulder. But, we have done our share of digging to hopefully uncover a few underground gems for our folks anyway — so fuck it, let’s party.

At The Gates – To Drink From The Night Itself

Some events travel throughout the heavy metal world like a shockwave. Ones that even when you’re at work at two-thirty in the morning all you can do is apologize to everyone around you and go, “Folks, I need to hear this”, and then just blast the thing at the loudest, shittiest cellphone speaker quality you can muster… and then go home and listen to it another twenty or thirty times because goddamnit, it’s so fucking good.

Such is the case with the new At The Gates music video for their title track from the upcoming May 18th (same day as Alkaloid… fuck) release To Drink From The Night Itself. At The Gates are big fans of the “drinking from the night itself” imagery, having most recently cited it on the group’s At War With Reality album during the song “Order From Chaos”; seeing them expand it out into its own track and adding to the “drinking from the night itself” count is exciting.

“To Drink From The Night Itself” moves savagely fast, filled with At The Gates’ trademark thrash-laden riffs and melo-death two-step groove to hammer things out — showing that the band have made it through the guitarist changeover pretty unscathed. It’s a recognizably At The Gates song for sure, but it is one that makes an immediate first impression and doesn’t let up often. Looking at the album’s tracklisting, one can probably understand why the song moves the way it does; not only is it the disc’s second song and title track, it may also be the actual musical opener after what looks like a minute-and-a-half long intro bit.

It is surgical in how quickly it hits all the right pleasure centers, headbanging groove fully in check for the verses and a guitar lead designed to be a massive earworm that brings up enough of Slaughter Of The Soul to make one anxious. There is one pleasant surprise in “To Drink From The Night Itself’s” constant barrage, though, and that is the quick drum-only break before the band launch fully back into the track, giving that brief break a dynamic feel and really highlighting just how good an impression that opening riff makes.

Of course, May 18th is a long way off from now, so I guess I’ll just sit here and stew, chomping at the bit to hear each new song. I personally loved At War With Reality, so the hype levels for To Drink From The Night Itself are already high. You’re excused if you wind up stuck on this part of the news roundup for about a half-hour or so; I certainly was. Demonical – A Void Most Obscure

Demonical, the Swedish death metal band that began life as a Centinex offshoot while that band was broken up, have a new album entitled Chaos Manifesto coming out later this March via Agonia Records — with a US release set for late April because distribution logistics are a nightmare hellscape, one could imagine.

While both Centinex and Demonical are active and share a majority of members between them, Demonical are the group who are a little more modernized, death-metal-wise, and the two songs released from Chaos Manifesto demonstrate that. We’ve previously covered the group’s earlier song “Towards Greater Gods” as it whipsawed from a pretty hefty gallop into near-Amon Amarth territory to close things ou,t and toward the end of February the group released another track from Chaos Manifesto — the album’s opener, “A Void Most Obscure“.

If you were worried that “Towards Greater Gods” was a little too melodic for your taste, “A Void Most Obscure” sticks with the more classically flavored straightforward speed and brutality approach, with a very light seasoning of chainsaw guitars buzzing throughout its opening abyssal growls. “A Void Most Obscure” is a loud and boistrous track, for the more meatheaded side of the Swede-death sphere and perfectly constructed for it. It maintains a relentless tempo and batters its listeners for a little under four minutes.

Chaos Manifesto will be an album to keep an eye out for, as the collective group are looking to notch another meaty death metal release onto their belts. 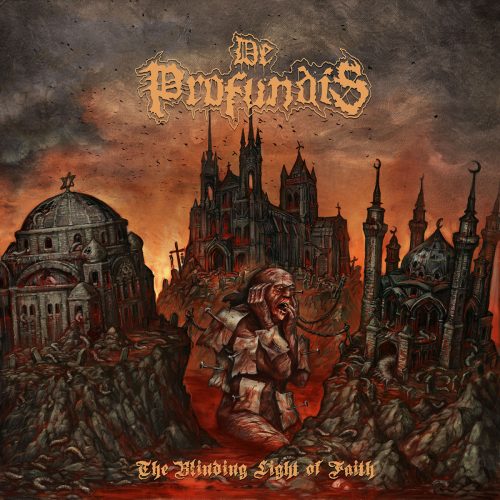 De Profundis – War Be Upon Him

Speaking of groups with a predilection toward death, the UK death metal collective De Profundis unleashed a new song in the dying breaths of February entitled “War Be Upon Him” — a select choice cut from the group’s upcoming release The Blinding Light Of Faith, which is due out in early May via Transcending Obscurity Records.

“War Be Upon Him” starts things caveman-like enough, a heavy and bludgeoning rhythm driving the song forward for its opening minute or so before the band hints at a melodic guitar lead that pops up now and again in the thrashier segments of the song, basically rotating “War Be Upon Him” between a bludgeoning ass-beating into a solid circle-pit frenzy.

It isn’t until halfway through that De Profundis break out the hammering groove as well, showing how the long-running crew are multifaceted experts in the death metal craft, with The Blinding Light Of Faith seemingly ready to dive headlong into the throwback death metal maelstrom — until you hit the last minute or so of the song and the high-shrieks come in, promising utter annihilation before the song folds back in on itself for one last run at its circle-pit melody.

And honestly, when you have a melodic line that good, you probably want as many shameless excuses as possible to continually fold back onto it. If anything, De Profundis show a remarkable amount of restraint in saving it for the perfectly timed moments, in between all of the skull smashing that happens for its near-five minutes with you.

At this point, your beloved writer’s stance on Belphegor’s Totenritual album is pretty well known. The disc proved to be one hell of a surprise, with the group knocking it out of the park on a disc that arrived well into their career, so well that it even ranked high on my ridiculous annual year end tome.

The heavier-than-hell blackened death metal crew recently released a lyric/performance video for the song “The Devil’s Son“, which is a track that for a long time was burned onto your dear writer’s mind as one of the many with a Lucifer-related sample at the front of it, this time the “YOU ARE TAINTED, THE DEVIL IS IN YOUR FLESH”.

The video focuses mostly on the lyrics of the song, though the band took the opportunity to at least provide backing visuals of themselves in the forest surrounded by snow and fire, intercut with destructive imagery and a focus on a violin player — which is relevant given that the story behind “The Devil’s Son” is that it is dedicated to violinist Niccolò Paganini. At the end of the video the band explain:

“These words serve as a tribute to one of the great masters of all things strings, Niccolo Paganini. Revered, shunned, and feared for his exceptional skills and hypnotic presence. A Gift from the devil himself it was said…”.

At this point, there’s been a pretty healthy amount of praise for Totenritual at this site — which is entirely my fault — but I would still highly recommend giving that one a listen if you haven’t done so yet. The album is a solid collection of singles to start out, but quickly morphs into a collective concept-run of tracks to close things out, with the last two minutes boiling down to inhuman screaming over a wall of guitars, and that is something that should not be missed.