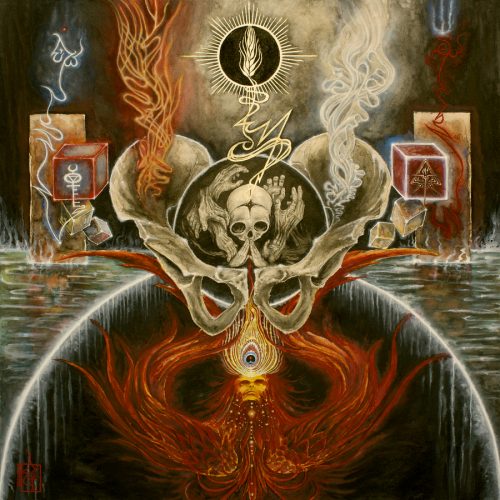 The participants in this album-length cathartic experience are three underground black metal bands from different countries: Precaria (Mexico), Deathspiral of Inherited Suffering (U.S.), and Dominus Ira (Russia). The album will be released by the distinctive I, Voidhanger Records on March 30, and today we’re fortunate to host the premiere of one of the album’s ten tracks — an offering by Deathspiral of Inherited Suffering (“DIS“) entitled “Bliss Inferno / Le Grand Néant“. 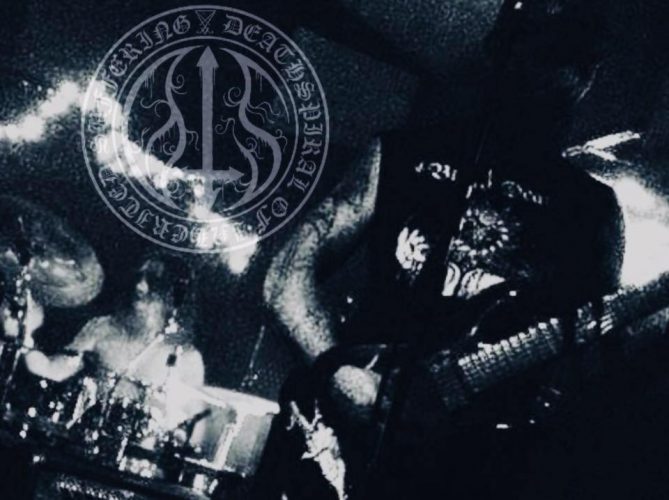 Metamorphosphoros includes three tracks by DIS, a band based in Memphis, Tennessee that was first formed in 2009. In the sequence of the album, those tracks follow the four songs by Precaria that start the album, and they precede the three tracks by Dominus Ira that end it.

By the time listeners reach the music of DIS, they will already have been consumed by the fires of Precaria. Precaria’s tracks manifest the concept of Theion in breathtaking fashion, through roaring storms of violent power and mind-bending speed and complexity.

Precaria’s music is a dense and wholly enveloping experience, propelled by stunningly furious drumming, blazingly fast and acrobatically nimble bass performances, and an extravaganza of wild, brain-warping guitar contortions. The music is exultant, and delirious, with a panoramic sweep, and staggering displays of gale-force ferocity.

The heaving and blaring chords resemble the massed power and ominous grandeur of a symphonic horn section; the melodies are discordant and deranged; the lead guitar is both frighteningly fast and completely unhinged, darting like a demon and whirling like a dervish in a mad dance; the vocals are no less frightening and fiery. And at well-chosen moments, the hurricanes of sound diminish, making way for eerie ambient passages and even angelic female vocals.

It would be a risky endeavor for any band to have to follow 25 minutes of Precaria’s utterly riveting and mentally destabilizing assaults, but DIS don’t shy away from the task. They meet it head-on with three tracks of equally decimating power and head-twisting, disorienting impact.

As in the case of Precaria’s tracks, those of DIS are often terrifically fast, and they also twist and turn in unpredictable directions, the fretwork flashing and leaping like demons cavorting in the fires of Hell. But the band also slow the pacing, delivering fearsome visions at a staggering pace, sometimes with searing solo guitar work or sweeping waves of spectral sound above the massive, lurching low-end weight.

The songs also end in surprising ways, with an atmospheric interlude of paranormal ambient electronic music at the end of the first one; an unexpected guitar duet to conclude the second; and the mournful sounds of strings to end the third.

DIS incorporate elements of death metal as well, most noticeably in the voracious growls of Principivm Angvis (who is also the band’s lead guitarist and bassist), and in some of the more massive, doom-shrouded riffs. And they add to the atmosphere of occult mystery and infernal majesty that surrounds the songs with shimmers and swirls of eerie melody.

The song we’re premiering today, “Bliss Inferno“, is a striking example of these achievements. And the band could hardly have chosen a more perfect title for the song, a title that could just as easily have been used for this album as a whole. The music sounds immense, and the chiming, dissonant notes together with the stately, booming cadence of the pacing give the song a majestic solemnity, as well as an air of looming malignancy, the sense of a sinister power poised to deliver an obliterating strike.

And the band themselves also deliver the strike, exploding in storms of blasting percussion, frenzied riffing, and enormous pulsating tones in the low end. DIS also add to the atmosphere of esoteric transformation with freakish spirals of guitar melody and other effusions of intricate fretwork. In addition, the conclusion of the song provides the further surprise mentioned above — an interlude called “Le Grand Néant” that’s an entrancing yet dark, distorted, and disturbing guitar duet, which has a bit of a flamenco flavor.

Perhaps needless to say, if DIS had their work cut out for them following Precaria, Dominus Ira (the solo project of Dmitry Kir, with session drums by Sculpto) have an even more difficult task following both Precaria and DIS. But they too rise to the challenge. Their three songs display a level of intricacy, unorthodox creativity, and fierce passion that rival those of their partners on this split.

At times slow and majestic, and at other times feverish and frenetic, the music is persistently powerful and persistently disturbing. An atmosphere of pitch-black darkness pervades the songs throughout all of their manifold changes of course — and the songs do change course abruptly, with sharp variations in tempo, rhythm, and mood. To a greater extent than the other two bands, Dominus Ira also unveil cascades of beautiful (albeit deeply melancholy) melody to go along with episodes of pure lunacy and blood-freezing fury.

Like the first two bands, this one displays impressive technical skill and hair-raising vocal barbarism and agony, and Dominus Ira also displays a knack for layering the music with a rich array of unexpected and often off-balancing sonic textures. Moreover, the juxtaposition of the shattering hurricane of insanity that feeds into the end of their second track, “Eerie Subterranean Call”, against the heart-rending funereal dirge that makes up the first half of the album’s final track, “…Of Coldness”, is one of the record’s high points.

Metamorphosphoros is, in short, a masterful creation by three black metal bands who clearly don’t feel hemmed in by convention, and whose unbounded creativity is matched by their compositional intricacy and their jaw-dropping technical skill. The album as a whole is wonderfully multi-faceted, emotionally provocative, and transfixing from beginning to end. It stands as an immersive work of dark and cathartic black metal art that will be difficult for anyone else to match this year.

A work of such rare esoteric power demanded equally striking artwork, and received it, thanks to the talents of Elijah Tamu (Panegyrist), who created the memorable cover image and the sigil for the album.

I hope you enjoy the one track from the album that we’re premiering today — and trust me, as good as “Bliss Inferno” is, it’s just the tip of a magnificent iceberg. (You can also check out one of Precaria’s previously released tracks below as well.)

One Response to “AN NCS PREMIERE: DEATHSPIRAL OF INHERITED SUFFERING — “BLISS INFERNO / LE GRAND NÉANT” (AND A REVIEW OF “METAMORPHOSPHOROS”)”