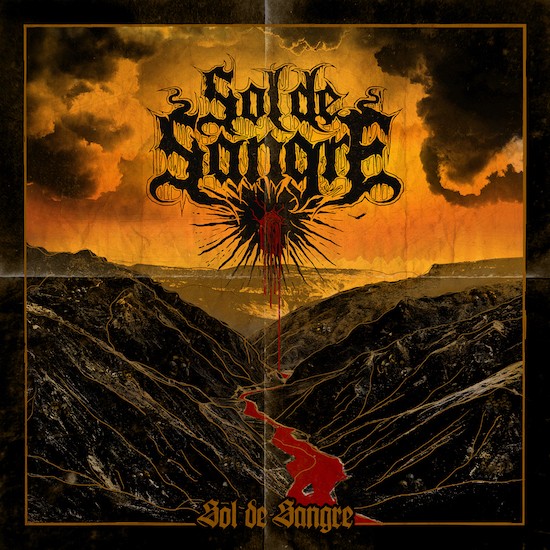 Welcome to our exclusive debut of one of this writer’s favorite death metal albums of 2018, one that includes some of my favorite extreme metal songs of 2017. Yes, Sol De Sangre began spreading the word of this album last year through the release of four singles, two of which we wrote about in our periodic collections of recommended new music and one of which we premiered. Those were tremendously tempting teasers for this first full-length offering, and fortunately the album as a whole proves to be just as fantastic as all those early glimpses.

There’s a lot to take in on this self-titled album — 12 tracks in total, and not one of them a throw-away. Over the course of the album this veteran group of Colombian musicians pay homage to a variety of classic death metal sounds, and yet once you’ve heard all of them I think you’ll conclude that the only name which really represents the music faithfully is the name of Sol De Sangre. They’ve put their own distinctive stamp on these compositions, while at the same time re-living a host of past glories. 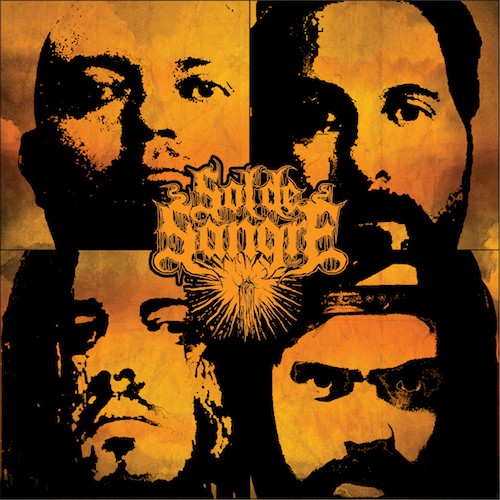 Here you will find sinister melodies, punishing grooves, rampant barbarism, eye-popping solos, and firebrand vocals (exclaiming the lyrics in Spanish) that sound like almost nothing else within the realms of death metal. The music is ingeniously crafted, extravagantly accented, and meticulously executed. It features outstanding production that gives the sound both towering power and knife-sharp clarity and separation. And while it’s furiously savage, the album is also a tremendous amount of hellish, blood-pumping fun.

Instrumental opening and closing tracks rarely seem to add much to most metal albums that include such things, but the ones on Sol De Sangre are absolutely not to be missed (although they’re quite different from everything else that comes between them). The prelude — “Los Andes” — is a beautiful, bright Spanish dance, a richly layered, impressively performed acoustic piece that’s so good one might easily welcome an entire album of such material. And the coda, “Llanos del Infierno”, is a kaleidoscopic, classically influenced instrumental, dreamlike and infernal, that includes symphonic horns and strings, sparkling harp-like tones, and a Spanish guitar melody that once again irresistibly seizes attention.

In between these gilded bookends are ten tracks that collectively deliver a non-stop thrill ride. It’s mainly a high-speed ride, but with enough variety within and between the songs, and with such top-shelf songwriting and performance skill on display, that the record keeps its claws tightly affixed to the listener’s throat all the way through. And the band’s affinity for the music of their homeland isn’t exhausted in the introductory and closing tracks, but surfaces repeatedly in the main body of the album.

One of those earlier singles, “Perros con Sarna”, is the track that follows the intro, and it provides immediate evidence of why the album is so electrifying, charging from the starting line with hard-punchng drumwork, a big, gut-rumbling, fleet-fingered bass presence, and vibrant, vicious, buzzing riffs. There’s a face-melter of a solo lying ahead, as well as a second, more dismal one that leads into a jackhammering rhythm punctured by the boiling of a diseased guitar melody… and one last shrieking, swooping, flamethrowing solo.

“Perros con Sarna” also introduces you to the wild vocal madness that’s a key feature of the band’s sound. There are more throat-scarring yells, livid braying, and lunatic shrieks than growls, but everything that comes from that throat is on fire. Sometimes, the vocals carry hints of melody without ever becoming actual singing; sometimes the vocalist spits the words in catchy cadences; sometimes they help push the music to crescendos of brawling mayhem before the band pull back into a pavement-splitting groove-fest.

The vocals are perhaps more hardcore or thrash in style than death metal, and there are other elements of punk and thrash in some of the songs as well, reaching a zenith in the band’s adrenaline-triggering cover of a 1991 single (“Bienvenida Muerte Bienvenida”) by the Colombian band Lluvia Negra.

Sol De Sangre are firing on all cylinders from beginning to end, whether discharging full-throttle rampages such as “La Feria del Chivo” and “Muertos con Ojos Estallados”, inflicting punishing sledgehammer blows in “Ratas”, or indulging in the spooky mid-paced rumble and pneumatic pounding that launches “La Cosecha del Miedo”. Following a creepy interlude (“Purgatorio”), they even show themselves capable of slowing everything down in the album’s title track to make a lumbering bone-bruiser. “Sol De Sangre” is massively heavy, and the dismal lead guitar harmonies seem to ooze rivulets of congealing blood and the aroma of death and decay.

You’ll find that almost all of the songs, regardless of their main lines, don’t stay stuck in one place from start to finish, and so perhaps by way of contrast the album includes one track (and only one), “Sin Ley y Sin Dios”, that’s relatively stripped-down and primitive compared to the others. But it’s still fun to hear, if you’re in the mood for pile-driving bass-and-drum destruction and a complement of blaring and jabbing chords.

Other people had their hands in the making of Sol De Sangre, apart from guitarist Rolando Ramos Torres, drummer Gonzalo Restrepo, bassist Gustavo Valderrama, and vocalist Kike Valderrama — all of whom were born in Colombia but are now scattered across Australia, Canada, and the U.S. The album was produced by Rolando Ramos Torres (with additional production work by Gustavo Valderrama), mixed by Tomas Skogsberg at Sunlight Studios in Stockholm, and mastered by Joel Grind in Portland, Oregon. The cover art was created by Gonzalo Restrepo.

Listen to our stream below, and if you dig it as much as we do, then order it via the link below.