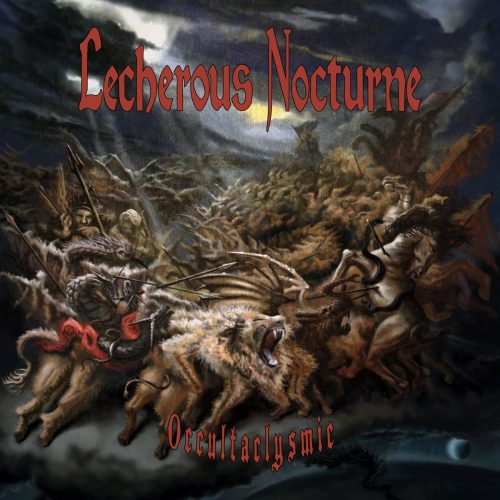 (Norway-based NCS contributor Karina Noctum prepared this review of the new album by Lecherous Nocturne, which will be released by Willowtip Records on April 6.)

Lecherous Nocturne are from South Carolina. The musicians have other musical projects that revolve around Brutal Death and Black Metal (Atrocious Abnormality, Cesspool of Vermin, Apotheosys, Helgardh). They have accumulated enough experience, and it fully shows in LN. Besides, since they’re from South Carolina you can bet the guitarist has played live with Nile, and that is one good hint when it comes to LN’s level of talent.

Lecherous Nocturne are many things. First, they are tech, so you get the insane guitar/bass work, and drums to die for. But keep in mind that if you have your reservations against tech or brutal, this is not your boring, souless tech, and not your raw brutal Neanderthalensis either. This is interesting, reminiscent of stuff that everyone loves but in the grey zone between several styles.

So yeah, this is tech but it is blackened and darkened, in a different spectrum than your average tech death band. Hints of rawness, that blackened thrash rawness, are present. Think of Absu! When it comes to DM you also have Morbid Angel’s omnipresent shadow, which is like a solid concrete foundation that makes this so heavy and enjoyable. The first song brings to mind Morbid Angel’s Heretic, for example.

Their latest album Occultaclysmic is to be released on April 6th by none other than one of the safest quality-checkers in extreme metal, Willowtip. (What a roster they have!) This is an album that further confirms the high quality that is to be found in their catalog. This is basically my definition of how the sound of metal should develop. It has thick musical roots firmly engrained in the DM genre while expanding the sound further into the extreme. It’s faster, much more powerful, and more intricate, without spiralling away into full chaos or a vastness of experimental sounds until the very core of the music is lost. It’s everything you hold dear, just taken to a next level. I do enjoy next levels.

You can still hear hints reminiscent of 1349 in this one, but I find the American sound in the vein of Angelcorpse to be more prominent. This time around I even found some shades of Swedish BM as well. But nonetheless, these are just mere influences; LN have developed a style on their own in the way they mix strategies and come up with their own sound.

This album is just so fulfilling! I’m always hungry for fast music. Finding stuff like this leaves me completely satisfied, the record of a band showing their cumulative experience without any limits. I hate it when musicians, willingly or not, stop themselves and tune it down until the music is unrecognizable at times. And well, admittedly, it sucks to be the keep-it-brootal type of person, but I do think that if you go somewhere new, let it be extreme, preferrably.

One particular thing to enjoy when it comes to tech is the speed at which tempos change. This album is the right one for those who appreciate the millisecond variations. And I feel I’ll need to listen to it repeatedly to be able to grasp the changes  thoroughly. More and more details remain to be discovered with each listen.

Musicians do play together, right? Should one take that for granted? Well no, not always. Sometimes music feels like the product of separate entities hanging loosely together by means of some artificial electronic tethers. But when it comes to LN everything is nicely arranged and fits together by means of nothing more than high skills when it comes to both composition and the rendering of a seemlingly flawless performance. They do play together, even if the sound is slightly dissonant at times. Love that!

Actually, LN used to be more dissonant, but the music is now more consonant, yet without abandoning their dissonant nature. This evolution may have come naturally, or perhaps it is intended. The fact that every instrument is played at the same skill level is also important. Anyway, the results yielded couldn’t be better.

For those of us who love extremities, how rewarding it is to hear the building up of the riffs in Occultaclysmic. They go from fast to even faster! I’ve listened to riffs, as you have, that move a bit slowly in the beginning, so that when they pick up the pace they give you a feeling of elation. But, you see, I find this building up from fast to even faster even more enjoyable, as it is explosive.

So how to describe the elegance of a song like “Remembrance”? it’s pretty classically oriented. I would describe it as a blackened sonata, with beautiful, layered acoustic guitars and the piano sound giving it an organic feeling — the beauty of melody, an oasis if you will, in the midst of the whole sound explosion of the songs before and after it.

“Psionics” is a prime example of what good Brutal Technical is all about. Brutal Tech Death is a hybrid, ideally fusing the best of both musical worlds. This song reminds me a lot of Desecravity, another fulfilling band I like a lot, but of course without going full Nintendo. I wish there were more Brutal Tech bands, but unfortunately there aren’t many (or at least not many I deem worthy of praise and private worship). Tech can go many ways — melodic, symphonic, jazzy, and so on. What a cool subgenre, but I prefer it Brutal, of course. There are moments here that also remind me of Malignancy.

“Time’s Ceaseless Onslaught” departs from the brutal spectrum, and to my ears enters Marduk’s realm. “Planet of the Crossing” brings a sense of closure and includes a degree of moderation, especially at the end, and thus it concludes this hell of a fast journey. The last song can be tied in to the first one, with blackened riffs that feel elongated now after the relentless tightness.

There will be many who label this whole album as just Brutal Technical Death, but most songs have a blackened timbre. Yet when it comes to feeling, it is a brutal as it gets. This is one of the most solid releases that I have had the pleasure to listen to this year so far, and I’ll be pretty happy if I get a release this cool in the upcoming months. This will be a tough one to beat! But of course it wouldn’t be surprising if something as cool comes out, taking into account that the tech scene can be a sort of Metal Olympics at times, and the bands keep trying to out-do each other. And that’s perfect. Go ahead. Give us more! More is more!