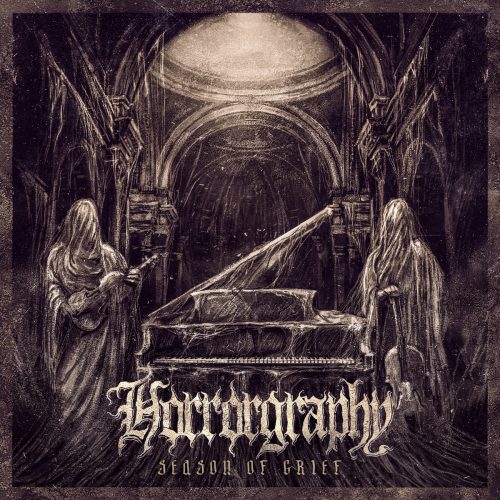 Despite the seemingly adamant rule pronounced in our site’s title, it should be apparent by now that we do make exceptions, and we’re about to make one now — or at least a partial exception. And in the case of the Greek band Horrorgraphy, the clean vocals are a vital, indeed an essential, ingredient in the music, for reasons you will soon discover.

Horrorgraphy are a new band, and their substantial debut album Season of Grief is set for release on April 14th, jointly by the Russian label Satanath Records and the Finnish label United By Chaos. The track we present today is “In A Dark Time“. 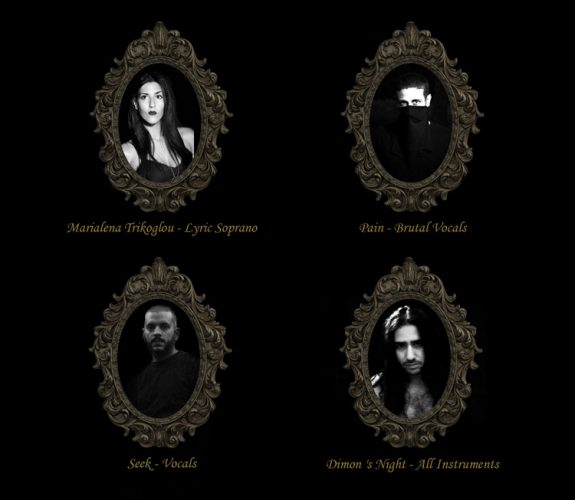 The music on this new album was composed, mixed, and mastered by a single individual — Dimon’s Night — and he performed all the instruments as well. To fulfill his conception for the music, he enlisted three different vocalists: a female soprano (Marialena Trikoglou), a man who also sings (Seek), and a death-growler (Pain). And that conception is unabashedly theatrical.

In listening to “In A Dark Time“, for example, the listener can’t help but imagine that they are hearing the soundtrack to a doom-metal musical play or extreme rock opera, one in which events unfold in narrative fashion — events that evoke feelings of gothic horror.

Across this unfolding preternatural pageant, in which tension builds, crests, subsides uneasily, and surges again to new crescendos of fear and emotional power, there are unifying musical themes, first introduced by piano and symphonic strings and then given ominous weight through the joinder of heavy riffing and drumwork.

The energy ebbs and rushes as this musical play proceeds, including spooky, keyboard or drum-driven interludes and surges of galloping percussion and rapid-fire fretwork. But the most dramatic (or perhaps more accurately, melodramatic) accents in the music come from those three voices, each of them taking center stage at different points, and sometimes joining together to magnify the moments of highest intensity.

Not all metal fans will have a taste for this kind of frightening theatrical extravagance, but fans of such bands as Therion and King Diamond may well embrace it whole-heartedly.

Look for the album on April 14th in a jewel-box CD edition with a 12-page booklet. It features artwork by Paint-It-Black Design and photographic artwork for the band members by Melu Wolf.

You’ll find a pre-order link below, along with two other prevuiously released songs — “The March of the Dead” and “Ghosts” (which is a free download on Bandcamp) — and of course our own premiere of “In A Dark Time”.

One Response to “AN NCS PREMIERE: HORRORGRAPHY — “IN A DARK TIME””