The last time the Polish death/grind band Feto In Fetus appeared in our pages was back in 2012 in the lead-up to their second album, Condemned To the Torture. They did participate in a five-way split in 2015 (Human Abattoir), but otherwise have been quiet since that last album. However, the silence is about to end — in spectacular fashion.

On March 30, Selfmadegod Records will discharge a new Feto In Fetus album named From Blessing To Violence, an 18-track neck-wrecking barrage that’s the source of the track we’re about to detonate today — “The Vanished Land“. 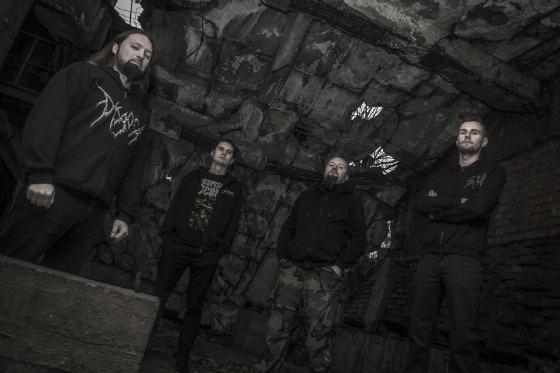 The band’s penchant for both musical and lyrical brutality is unabashedly on display in the new release, with the subject matter consisting of tales of “pathological deviation, serial killers and various methods of taking someone’s life”, The music sounds like one life-taker after another for approximately half an hour.

The Feto In Fetus brand of death/grind has an affinity with slam, and that’s evident in the groove-centric mauling of “The Vanished Land“, which includes the kind of rhythms that bring jackhammers to mind. Those alternate with syncopated, jabbing riffs, while the guitarist inflicts bursts of blaring sound and episodes of vicious swarming and swirling noise, as the vocalist roars and shrieks like an enraged beast.

It’s a compact song, like all the others on the album, but the band still pack a lot of gear-shifting dynamism into the experience, rushing toward the end in a surge of blast-beat-driven barbarism.

As mentioned, the album will be released on March 30, and it’s available for pre-order now on CD (with apparel and bundles also available). As a bonus, we’re including a stream of a previously released track (“Wake Up and Die“) along with our own premiere.