There’s such a potent rhythmic drive to this song, like a big powerful engine with pistons hammering, and all that robust torque propelling a heavy machine forward in a way that elevates the pulse rate. We’re the passengers, carried along but also wanting to move our heads like pistons too, locked in to the movements of this gear-shifting juggernaut as it eats up the pavement.

As you’ll discover, that’s only one aspect of the song we’re helping to premiere today, but it’s an aspect with a primal, charismatic attraction. It’s a testament to the imagination of the Polish band Hegemone that what they’ve built around such a muscular musical drivetrain is equally seductive.

The song is “Π“, and it comes from the band’s new album We Disaappear, which will be released on May 11th by Debemur Morti Productions. 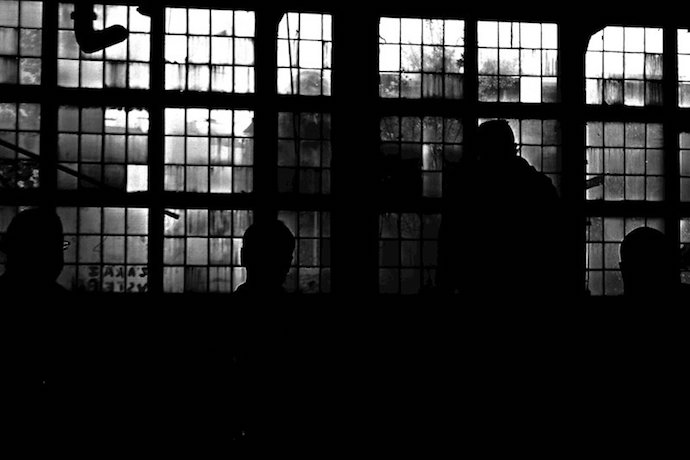 The heavy, sludgy bass lines and magnetic drum rhythms set up a syncopated cadence that seems a kindred spirit to post-punk, but the band also punch the accelerator, launching the music ahead in blast-beat-driven surges. And as the rhythm section carries the listener along, helpless to resist, the strummed chords and swarming fretwork magnify the music’s magnetic appeal, and its bursts of intensity.

Eerie, swirling and soaring keyboard melodies and chiming guitar notes give the music a spooky ambience; dissonant guitar emissions give it an air of incipient derangement; flesh-stripping shrieks and hoarse, heartless howls add the fuel of fury to the song’s propulsion.

You can pick out elements of black metal, post-metal, post-punk, and sludge in the song (among others), and Hegemone harness them together in a way that seems natural, heavy, and hypnotic. And this is only one track out of six. They do some very interesting things in the other five — the songs aren’t clones of each other, and that’s part of what makes the album one that’s well worth your attention.

We Disappear features cover art and graphic design by Dehn Sora. It will be released by Debemur Morti on May 11th in a variety of formats, all of which can be pre-ordered via the links below.