(The multinational band Sojourner released their second album earlier this month through Avantgarde Music, and in this post our Norway-based contributor Karina Noctum provides thoughts about the music and also elicitsthoughts from vocalist Emilio Crespo about his approach to the crafting of Sojourner’s lyrics. You’ll have a chance to listen to the music as well.)

I don’t remember precisely how I found Sojourner, but what I do remember is that the cover of the first album dragged me to them first. When I saw it, I thought it had to be some sort of atmospheric band and I had to check it out. Yes it was, and a very impressive one. The best atmospheric music (for me) is created by a combination of all the musical instruments and the vocals, layered in such a way as to create the effect, rather than elevating one layer “above” it all — such as something ambient thrown in for good measure — which feels disconnected from everything else.

That discovery of Sojourner was in 2016 when they released Empires of Ash, but now they have released a new album, The Shadowed Road, which again reveals a good production that has rendered a layering to my liking. This album has been carefully made, and particular care has been taken in preserving a contemplative mood throughout the album, while including a variety of rhythms and dynamic song structures. 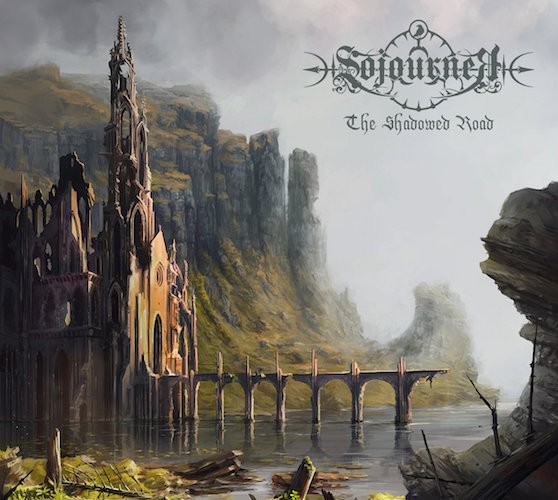 The folk essence of the music has been mixed with a kind of metal that reminds me of Opeth. It’s a bit DM, a bit folk, and some BM parts here and there. The band just call it folk-influenced atmospheric metal to sum it up. I fond the melodies Opeth-ian because they are quite dark and induce a contemplative mood.

The female vocals of Chloe Bray are not precisely operatic in style — not some metal Carmina Burana that at times feels too pompous for metal and becomes a separate entity floating above all else and winds up stealing the attention and trampling on the music. The female vocals here, on the contrary, are heartfelt and quite in touch with the rest of the music, a quality that adds a lot to the atmosphere. The last two songs of this album, “Where Lost Hope Lies” and “The Shadowed Road” are reminiscent of Summoning (Sojourner have released a Summoning cover meant as a tribute).

Having humbly attempted to describe the music, now I want to give the word to Emilio Crespo, the male vocalist. He will tell us more about the connection the lyrical themes have to nature, which I find interesting, amongst other things.

I am very happy with the result and feel that the lyrics this time around were much more mature, well-written, and thought out. I never really have an actual process. The moment I become inspired, I need to write what I feel. Needless to say, it can come at any moment. If I did have any sort of ‘process’ it is with having piano and strings music on. I rarely play metal while I am writing. With that style of music, I can get to the source of how I wish to express what the song is about. It helps more than anything else. Research is rarely necessary since I write what I know. I wouldn’t like to release a song that might have something wrong in the lyrics or not be totally accurate.

I almost always write the lyrics before the music is even done. In this case it can be tedious since I have to change words or add stuff, and I don’t like to change anything too much for fear of the meaning being lost. Luckily it always works out. It can be difficult, especially when I’m writing Chloe’s parts since she has a different rhythm when she sings than I do. I always forget the difference that can exist between singing clean and harsh, haha. She always does a great job at adapting anything to maintain my original point.

What I find to be easiest in keeping the lyrics original is be true to yourself and the way you like to write. Do not try to emulate anyone, and just follow the words as they come out of you. It can be hard to be 100% original in some subjects since it has been done many times before and our genre has existed for over 40 years. I think that is why I don’t listen to metal while writing. I get to keep a clean slate and just write what comes naturally to me and not think ‘is this metal?’…couldn’t care less really. 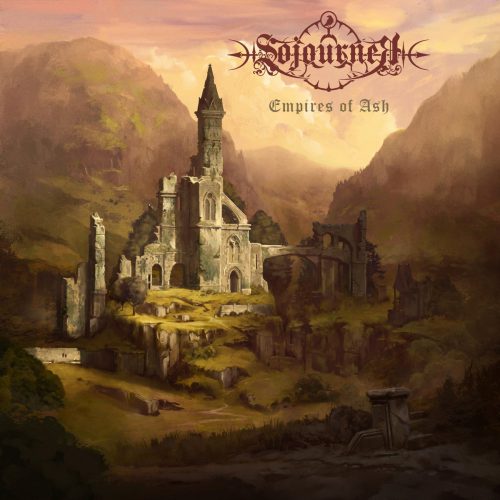 I just get into the mindset of being in nature (if I’m at home) or I actually go out into nature and become inspired. I can’t know what I will write at that very moment. It just comes. I feel that the lyrics go very well with the music because if I have the lyrics beforehand I will choose the song that just gives me the image or makes me feel that those lyrics will go well with the melodies and instrumentation. It has to be imagined as a whole. We are painting a picture with music and want people to be immersed into the journey. If it is the other way around and I have to write to the song, that’s even better because the story is there. I just need to put a meaning to it.

My lyrics tend to deal with either experiences of my own, things I feel strongly about or have a deep interest in. In the case of Sojourner it inclines heavily towards aspects of nature and fantasy. I have a deep and profound respect for nature due to the fact that it is literally the be-all and end-all of everything. I feel we need to take care of it and not be a detriment.

In terms of the fantasy aspect, we all love the genre. We all have our own favourites and some know more than others, but it definitely is a collective love for it. On the first album the lyrics delved into a battle style of fantasy, but this time around I took an emotional approach to it rather than an ‘action-packed’ one.

The importance of Nature

I believe nature literally encompasses everything. It is the reason we exist and the reason why we’ll eventually perish. I feel a huge connection to it all and love to write about it because it gives so much material or ideas to express. Whether it is a story or an actual real-life topic, you can do so much with it all the time. It allows you to be very poetic even. Some of the songs that deal with this topic are “Empires of Ash”, “Heritage of the Natural Realm”, “Ode to the Sovereign”, and others.

I really enjoy bringing up Gaia though. Basically the Greek personification of “Mother Earth”. I don’t actually believe in any deities, but from a lyrical standpoint it is a perfect subject to talk about. I often use her in the songs where I want to apologize on behalf of humans for the damage we’ve done, or even just have a “conversation” with her. A good example is on the new album, in the song “Ode to the Sovereign”: “We have forgotten our stance In somber storms you dance. From your path we have strayed Misguided and treacherous, we remain.” This also gives a bit of insight on how I feel about nature and how refreshing it is to get out there and just enjoy it and take it all in. I have no need for fairytales and destructive faiths. The peace and serenity of being next to a lake with no one around and hearing water trickle and birds chirping is one of the best experiences you can have. You feel at peace without yourself and that is what we all strive for.

It is about being transported to other realms and the feelings you get while you are there. You have this opportunity to actually have feelings of wonder and excitement (among others) through fantasy. I for one can feel that way when I’m reading a book or playing an amazing RPG. Realms that are created imply that the world is expansive and a lot is involved. I classify my lyrics as “short stories” sometimes. I am inspired by other literature, of course, but most is from my own mind. Aside from the nature songs on Empires of Ash, all the other songs are creations of my own. With inspirations like The KingKiller Chronicles, for example.

There are two songs on the new album that are inspired by, and could even be considered an homage to, two Anime shows. “An Oath Sworn in Sorrow” is actually based on “Attack on Titan” but with my own twist. For those who watch the anime, I wrote the lyrics to that song based on a hypothetical situation of the Titans being wiped ou,t and Mikasa has to put an end to her brother Eren since he is indeed one as well and he wants her to. His wish is to make them become extinct, so I just took that and turned it into a story about a tough decision for Mikasa. The song takes us through her perspective and feelings of rage, anguish, and sadness.

The second one is “Our Bones Among the Ruins”, which is based on the beautiful atmospheric anime “Mushishi”. There are beings that dwell in a certain realm and kind of wreak havoc. I tell the story in my own way through the eyes of a lone person. I really recommend these two anime’s. They are ridiculously good.