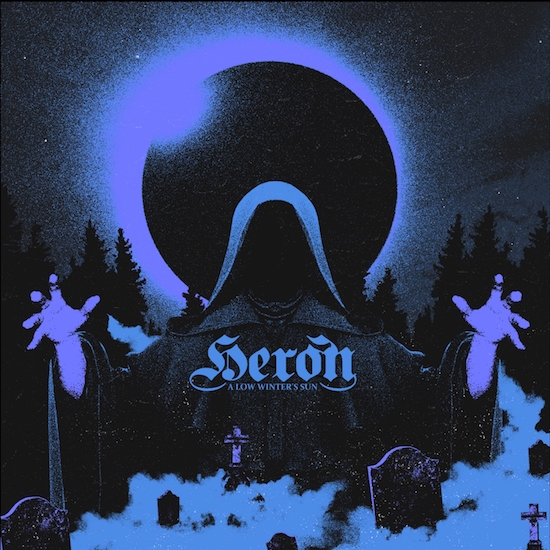 The wail of an air-raid siren ends the song you’re about to hear, but it comes too late — by then, the bombs have already fallen, the damage has been done, and it’s damage on a cataclysmic scale.

The name of the song is “Of Gods and Goats“, and it’s the opening track from A Low Winter’s Sun, the new full-length album by the Vancouver sludge/doom band Heron, which will be released on Friday the 13th of April. The album follows on the heels of two Heron EPs, their self-titled debut in 2015 and Fire Twin in 2016. 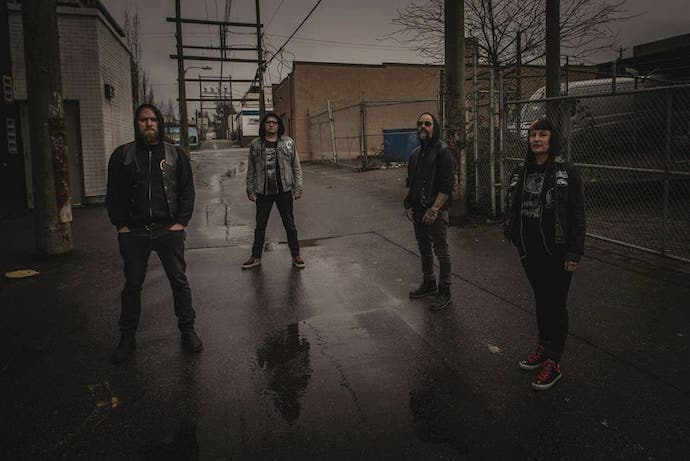 “Of Gods and Goats” truly is a skull-splintering experience, and a soul-sucking one, too. The mood is grim and oppressive, but the music is also physically compulsive, exerting a primal grip on whatever it is that causes involuntary headbanging.

There’s no air raid siren to provide a warning at the outset of what’s eventually going to happen, only the warning of massive, distorted, pounding chords, gut-punching drum beats, the disturbing whine of feedback, and a distant roaring voice. There’s a sense of looming dread, which unfolds through lurching chords into visions of imminent catastrophe. As if things couldn’t get any scarier, intense, blood-spraying shrieks and equally harrowing howls amplify the fear factor.

But the music’s mounting intensity doesn’t stop there. The drums begin to rumble like cannons and crack like gun shots, and then to clatter and drive as the riffing also becomes more intense and the roars and shrieks begin happening at the same time, leading to an eruption of pile-driving groove. A slow, dismal, moaning guitar melody surfaces here and there, slithering through this bludgeoning calamity — and then the siren comes, too late.

A Low Winter’s Sun was recorded and mixed by Jesse Gander at Raincity Recorders, and it was mastered by that master of heaviness, Brad Boatright (Audiosiege). The eye-catching cover art was created by Cryptworm. You can pre-order the album now via Bandcamp.

One Response to “AN NCS PREMIERE: HERON — “OF GODS AND GOATS””