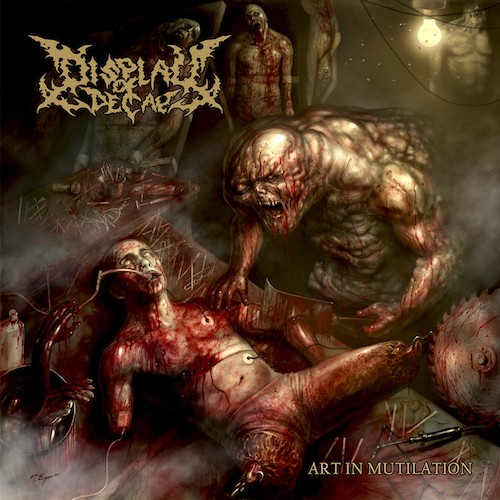 If you imagine Display of Decay as a big rocketing road machine with a roaring jet engine in place of the usual pumping cylinders (and that’s not hard to imagine at all), the brakes obviously failed a few hundred miles ago, to the vicious glee of the blood-lusting demons at the controls. When you listen to their new album, Art In Mutilation, it’s patently obvious that they’re having a howling good time, and their full-throttle, take-no-prisoners enthusiasm is highly contagious.

This is the fifth studio release by these Edmonton-based barbarians in a career that now spans ten years. It will be released by Gore House Productions on May 18th. One single from the album (“Forced Frontal Lobotomy”) debuted a few weeks ago at Metal Injection, and now we’ve got another one for you. Buckle up and take some deep breaths in preparation for “Unable To Identify“. 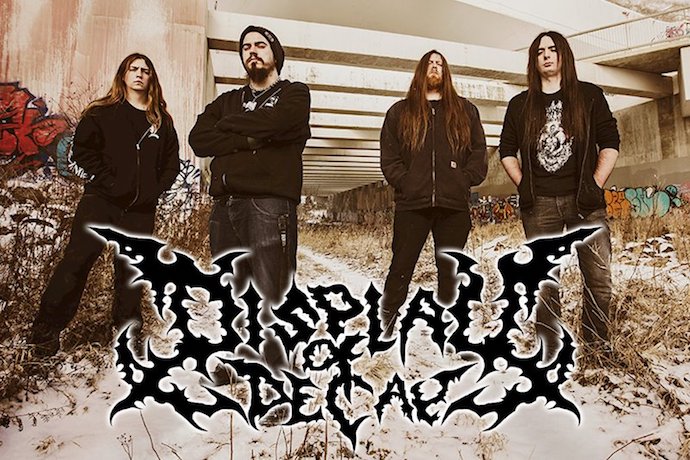 The song pulls no punches, and pays no heed to any known speed limits. It’s also implacably savage. The drumming is military grade in its destructiveness, a combination of massed artillery fire and spraying machine-guns, with bursts of hammering pulverization. The bass work is teeth-loosening in its brutality. The highly accelerated riff swarms and string squeals convey some kind of chaotic feeding frenzy among hellish beasts. And the vocals are both utterly rabid and just as furiously fast in the delivery of bestial howls, growled barks, and mad roars.

In a nutshell, if you’re in need of a massive adrenaline rush, look no further.

It’s a gory business that Display of Decay have dedicated themselves to, with tips of the hat to such serial killers as Cannibal Corpse, Monstrosity, and Malevolent Creation. And so it shouldn’t be shocking that this new album brandishes shocking cover art by Toshihiro Egawa (Defeated Sanity, Devourment, Malignancy). It was recorded by Christian Donaldson (Cryptopsy) and Marc-o Fréchette and was mixed and mastered by Christian Donaldson at The Grid (Beyond Creation, Cryptopsy, Ingested), in Montreal, Quebec. Donaldson also makes a guest appearance on the album.

Gore House will present the album on CD and digitally. You’ll find the track list and a pre-order link below, as well as streams of that first single and today’s premiere of the second one.

One Response to “AN NCS PREMIERE: DISPLAY OF DECAY — “UNABLE TO IDENTIFY””