So, in the annals of Norwegian black metal, it’s fair to say this new release is an historic event. But is it more than that? 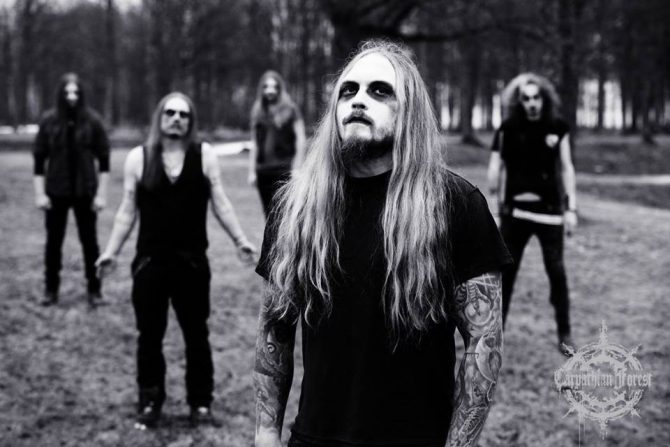 It’s a relatively brief come-back we have here, just two songs — “Likeim” and “All My Friends Are Dead“, the latter of which is a cover of a Turbonegro song. It’s the first of what the band contemplate as a trilogy of 7″ releases leading up to a new album, LIKSKUE – Dødens Arkitekur.

Carpathian Forest describe the original track on this new release as follows: “Some songs should be simply done this way. ‘Likeim’ is a statement for everything. Rock and Punk. Existentialism, suicide. To jump in the waterfalls of Rjukan, Telemark”. It is indeed a short, sharp blast of feral punk energy, its compulsive bounding drive laced with fiery spirals of unnerving melody, deranged soloing, and viciously orgiastic vocals.

The band’s faithful take on “All My Friends Are Dead” is just as contagious. It’s hard to improve on the hooks in the original track, and Carpathian Forest don’t try, but the guitar solo is a thriller, and the vocals are of course downright demonic, which is the biggest twist on the original.

To these ears, this two-track release is a welcome return from a band who sound in fine form. Likeim / All My Friends Are Dead was released two days ago (April 13) by Indie Recordings. It’s a download at Bandcamp and a 7″ vinyl. 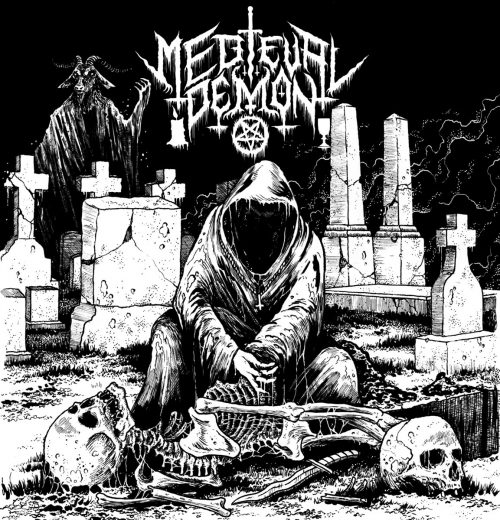 I’m now moving from one venerable band to another, but one that’s considerably more obscure than Carpathian Forest.

Medieval Demon was formed in Greece by two brothers in 1993. After a few demos, their debut album Demonolatria was released by Unisound in 1998… and then came 20 years of silence. Finally, they have produced a second album, Medieval Necromancy, which will be released by Hells Headbangers on June 22nd.

I can’t claim any familiarity with Demonolatria, and thus can shed no light on how the new material compares to the songs of 20 years ago. What I can say is that the first single, “Moldy Wings of Death“, is very enticing. It has a mystical, occult aura, coupled with a seething, vicious energy. The vocals are over-the-top; the rapidly scissoring riffs convey frenzy; the booming drums resonate ominously; the strange hooting sounds and sweeping waves of melody lend the song an air of eerie infernal grandeur, and there is indeed a feeling of medieval horror that comes through in the music. Plus, there’s a wonderful solo waiting for you as well. 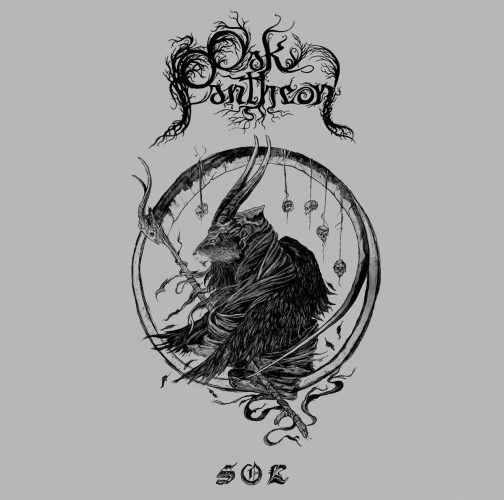 Oak Pantheon should need no introduction to our site’s regular visitors. We’ve been following them since their inception, watching and listening as they’ve grown ever stronger and more exploratory in their musical progressions (and they started from a rock-solid place to begin with). But what they’ve done on their newest release is a twist — a successful one, given the band’s songwriting talent and performance skill — but still a surprise.

Their new EP is named Sol, and it will be released on April 16th (tomorrow!). The music is described by the band as an acoustic neo-folk project that began as something of a lark and transformed into a serious year-long endeavor. The band have further stated:

“We’ll be taking you on a journey to the end of existence, where the earth is burned to ashes by the Sun and all hope for humanity is crushed. With a heavy emphasis on acoustic guitars and cello, this release is for those who want more folk music and more atmosphere.”

The title track, which you can hear now, is truly haunting, and surprisingly heavy and ominous for an acoustic track. The harsh gasping and deep, almost whispering vocals (which put me in mind of Leonard Cohen) add to the uneasiness of this gloomy composition, but there is also spectral beauty in the clean voices and the low moaning of the cello, and a kind of moody vibrancy in the strummed chords.

What you will be able to hear tomorrow are five more tracks whose pacing and moods change, sometimes almost bursting with vitality and brightness, but always being pulled back to a place where wistful regret or a beleaguered fatalism seem to dwell, consistent with the apocalyptic theme of the music.

The music is never less than enthralling, and is persistently beautiful even in its most haunted and sorrowing moments. It becomes incredibly soft and fragile; it also mounts in power to plateaus of mystic grandeur. Through it all, and despite the hopelessness of the theme and the frequent moodiness of the music, a kind of reverence for the life that will be lost shines through these sounds.

Or maybe that’s just me. Experience it  for yourselves… it will be worth your time.

P.S. In other Oak Pantheon news, the band will be releasing a vinyl edition of their 2012 debut album, From A Whisper, which features numerous works of art by the super-talented Kim Holm. I’ve had a sneak peak at what he’s done, and it’s spectacular. In addition, the band have disclosed plans for a second split release with Amiensus at some point this year, and a third full-length metal album (in 2019 at the earliest). For more news about all these developments, keep an eye on Oak Pantheon’s Facebook page. 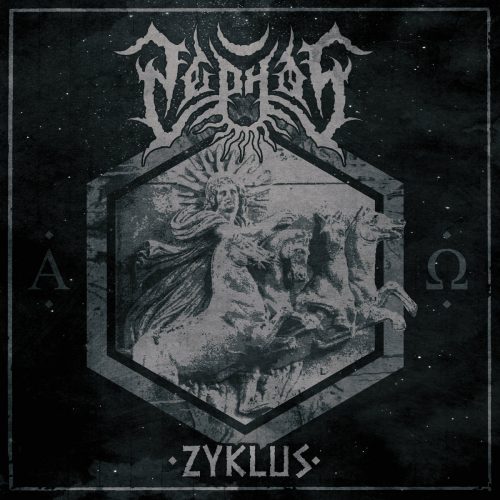 To bring this two-part Shades of Black column to an end, I chose the debut album by a duo from Düsseldorf named Nephos. Entitled Zyklus, it was released on April 5th and consists of seven tracks totaling about a half hour of music.

The album is bookended by two beautiful instrumental pieces, chiefly executed by acoustic guitar and ambient backing. In between those two sublimely haunting tracks is a powerhouse experience.

In part, the songs are gale-driven conflagrations of murderous riffing, equally vicious and incendiary vocals, and turbocharged drumming. The effect of those torrentially surging, fire-breathing movements is electrifying. But the music is just as electrifying when the band slow the pace, when the drums tumble and boom, when the vocals transform into bestial roars and wild yells (as well as somber reflections), when cold, gloomy melodies ring out like funeral bells or flicker like phantasms.

In alternating sequences, the atmosphere of the music is oppressive, delirious, chillingly baleful, irresistibly convulsive. The songwriting is excellent, merging together frightening, unearthly atmospherics and visceral, physically arresting power. It reaches epic heights and dives to pestilential lows. And the album as a whole is a deeply engrossing experience as you move through it from start to finish, thanks in part to the presence of acoustic accents, as well as to the dynamism of the pacing, the altering moods and energies of the music, and the penetrating allure of so many bleak but memorable strains of melody.

In short, this is a great surprise out of the blue, a well-plotted and tremendously accomplished album with no weak links.