In November of 2015 we premiered an album named FVCK by Slovenia’s The Canyon Observer. As I wrote then: “It will fuck you up. It’s almost unremittingly intense — as heavy as a pile of corpses, as hallucinatory as a drug-induced nightmare, chaotic, deranged, and powerfully disorienting. It’s also spellbinding, a descent into a subterranean demolition zone that proves to be as hypnotic as it is harrowing.”

Today, we again find ourselves in the fortunate position of premiering an album by the same band. This new one is named NØLL, and it will be released on April 20 by Vox Project (France) and Kapa Records (Slovenia). For this new album, the band haven’t completely left behind their post-metal influences, but the new album amplifies the elements of sludge and doom in their sound, mixes in a variety of disturbing experimental textures, and even more dramatically increases, to truly stunning levels, their propensity for inflicting violence. 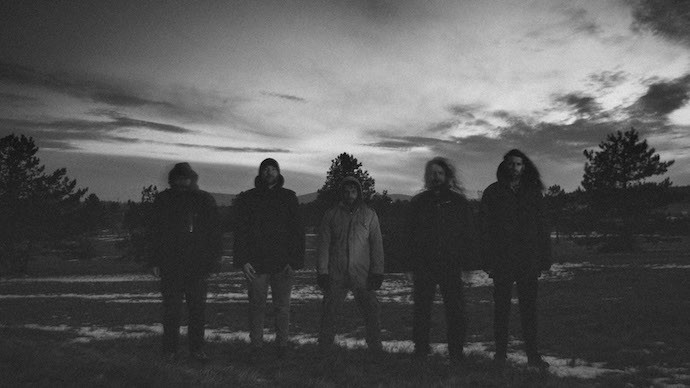 The music is almost relentlessly and mercilessly intense, and it’s almost always titanically punishing in its rhythmic drives. Like the last album, it also somehow proves to be immersive and hypnotic as well as bleak and harrowing.

As an opening track, “Mirrors” is not an easy or welcoming introduction. The abrasive, squalling, crazed, electronic sounds at the beginning may put your teeth on edge. The clamoring voice and off-kilter chords which follow don’t make things any easier. And after that, after your brain has been torn a bit, the song becomes a massive, methodically pounding juggernaut of apocalyptic sound, with a completely incinerating example of tortured vocal agony and fury.

The follow-on title track has a livelier rumbling gait, but with its own fair share of skull-splintering hammer blows, along with gales of caustic riffing and blaring leads. A mountainous and ominous bass solo launches “Entities” and continues to move as the guitars send out tendrils of eerie, unnerving melody. Not for the last time on the album, there is an atmosphere of desolate and beleaguered majesty in the song, conjoined with sensations of emotional collapse and mental fracturing, and ultimately the track devolves into a violent maelstrom of chaotic noise and frightening vocal madness

True to its name, “Lacerations” is a full-force sandstorm of cutting riffs, segmented with more of those trademark pile-driving grooves and bursts of machine-gunning snare drum, which evolves into a mind-warp of queasy, hallucinatory fretwork.

The band follow the slow, soul-sucking finale of “Lacerations” with the rocketing drumwork and shimmering abrasion of “Abstract”. The song also becomes one of the few places on the album when the mood of the music turns soft and meditative… and even falls completely silent, perhaps providing a space for reflection before the band move into a long, mesmerizing, multi-textured, rhythmically intricate instrumental passage, showing a very different side of their interests and diverse talents.

In more ways than one, “Abstract” might be considered the centerpiece of the album, but the band waste no time feeding you into the blades of a jet engine roaring and ripping at full speed, which is what the superheated “Fracture” resembles before it just goes supernova.

Ever mindful of the album’s flow, the group follow the blinding finish of “Fracture” with the slow, cold, calamitous bass solo that launches “Neon Ooze”. The bass provides the sickening ooze; other elements of sound provide the neon glow, which itself seems to be kind of a putrescent green. The lights shimmer and shine with increasing intensity, as does the animism of the drumwork, until the music begins to stagger and lurch with brontosaurean heaviness and a mood of suffocating oppressiveness.

All good and ghastly things must come to an end, and The Canyon Observer end NØLL with “Circulation”. Beginning with a strange and chilling, cosmic ambient introduction, it evolves into a spellbinding experience, soaring wails and abrasive strings combining to pull the listener deeper and deeper into an uneasy trance… which eventually begins to fracture.

You’re halfway through this stunning closer before the drummer makes his entrance, and his slow and steady rhythm, coupled with a massively craggy bassline, provide an anchor point for the music to soar in a way that’s glorious, but still edged with pain, like flying off a precipice in slow motion, arms wide, a sensation of flight above the abyss below that will eventually claim your fall.

I try to avoid track-by-track reviews. I couldn’t help myself this time. Sorry.

Look for NØLL on April 20. You can pre-order via the links below.