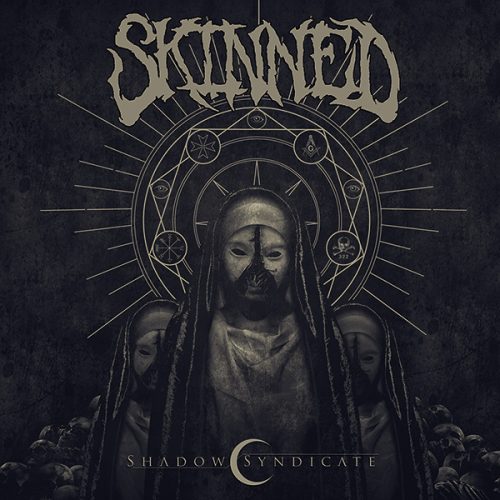 In August of last year we premiered a video for “We Are the End“, a tremendous new single by the electrifying Colorado death metal band Skinned. As we reported then, the song was to appear on Shadow Syndicate, the forthcoming fifth album in this band’s slaughtering career, which dates back to the mid-’90s. But the months passed, and the album didn’t arrive….

But now it finally has a label (Xenokorp Records) and a release date — May 4th – and today we get to bring you another video for another single from the album, this one called “As Their Bodies Fall“, which features guest vocals by Josh Welshman of Defeated Sanity and lyrics by Paul McGuire of Cerebral Bore, who also directed this lyric video. 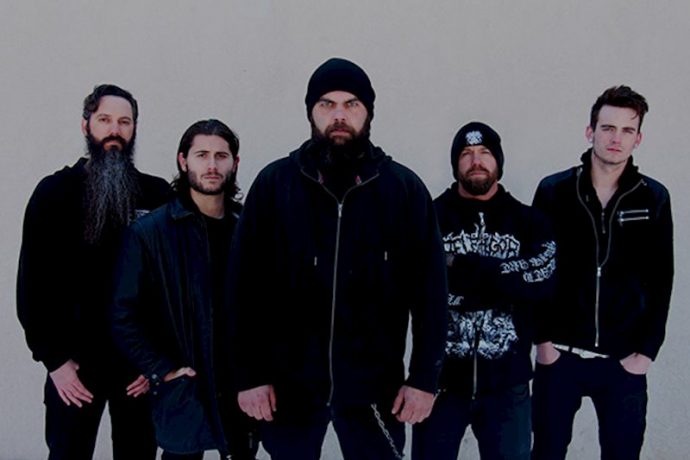 In re-reading what I wrote about “We Are the End” last year, it’s apparent that the track caused me to sort of lose my mind. I referred to it as “a glorious rampage”, the kind of thing that “might send some listeners to the ER gasping for oxygen and in need of defibrillation paddles”, only pausing to “break up the technically eye-popping feeding frenzy with a bout of head-hammering groove and a second, slower detour that’s as morbid as a stinking crypt.”

The new song we’re bringing you today has a similar sanity-fracturing effect. It’s undeniably vicious and mercilessly brutal, but it proves to be a multifaceted and instrumentally intricate piece, sort of like a beast spinning in a pillar of flame, revealing new faces of horror as it whips about.

The song includes some especially riveting (and often off-kilter) rhythmic interplay, and you get a taste of that right from the start. As the song surges ahead, the riffing jolts, swarms, overflows in a seething boil, pounds like an accelerated pile-driver, and seems to moan in dismal agony. Meanwhile the drumming pops your head back and forth and occasionally just blasts it to smithereens in light-speed fusillades, while the guttural ugliness of the vocals never lets you forget that you’re in the presence of beasts.

As icing on the cake, the song holds together really well, operating like a precision machine despite its destabilizing changes, and with currents of bleak and bruising melody that further link the pieces into a coherent whole.

Shadow Syndicate was recorded at Flatline Audio by Dave Otero (known for his work with the likes of Cattle Decapitation, Allegaeon, Khemmis, and Cephalic Carnage). The album is described as “a world in itself where each song explores a different aspect of dark beliefs (conspiracy theories, unsolved mysteries…), the whole creating a society of extreme darkness under the domination of the New World Order where the citizens become cattle for the governments and guinea pigs for alien entities, etc., ultimately leading our species to its demise, the face under the merciless boot of the… Shadow Syndicate“.

Along with our premiere of the new song and video, we’re also including the previous video for “We Are the End“; that single is now available as a free digital download HERE.