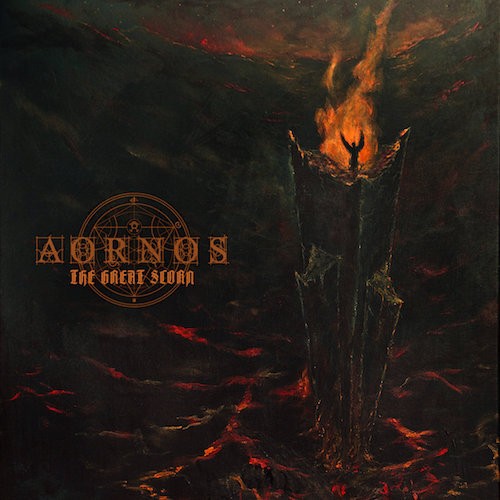 Anvil Kvlt’s artwork for the new album by the Hungarian black metal band Aornos signals important aspects of the music, as does the album’s title: The Great Scorn. The song we bring you today in advance of the album’s April 29 release by a consortium of labels provides a further gripping representation of what the album holds in store.

That track — “From A Higher Reality” — is rich in arcane atmosphere and bursting with poisonous, blood-rushing energy. It bruises the mind, but also practices a devilish form of sorcery that leads to a perilous hypnosis.

In its opening minutes, “From A Higher Reality” alternates between bursts of furious blasting percussion joined with wild, whirling riffs, and phases of cold, cruel riffing that’s eerie and occult. Differing vocals also trade off, matching the changing states of the music, from shudderingly wild and bestial to solemnly reverent, and those opening minutes are capped by a jaw-dropping solo whose speed and freakishness seem beyond the pale of human dexterity.

Further changes are yet to come, however. A bridge leads into a swirl of mystical melody and ominous, mercurial bass notes, and then a spiraling solo feeds back into a mounting storm that raises visions of infernal grandeur (look again at the cover art). The transcendence of ordinary, all too human things, and the quest for the eternal, are part of the inspiration of the music, and that comes through in the sensations of this song.

The Scorn is the third album of Aornos, and it will be co-released on April 29th by Symbol Of Domination, Ira Aeterna, The True Plague, and Black Metal Records, and it comes recommended for fans of Emperor, Ascension, and 1349. Below, you can hear the song we’re premiering, as well as a previously released track, “The Kingdom of Nemesis“.