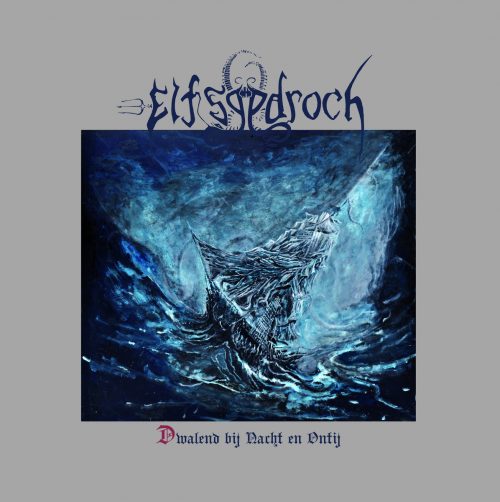 In 2016 the mysterious Dutch black metal band Elfsgedroch made a very impressive debut with Op de beenderen van onze voorvaderen, and now they have made a truly triumphant return through a new release named Dwalend bij Nacht en Ontij, which has been branded an EP but is 44 minutes long.

The “EP” was inspired by particular places and events, by aspects of the culture and folklore of the northwest coast of the Netherlands. But the music summons emotional experiences that are unlimited by place or time, but are instead fundamental to human existence, and it does so with enthralling power.

Of the album’s inspirations, Elfsgedroch has written:

“Between the Northsea and the Waddensea. Islands with each their own tale. Men who could not resist the calling of the sea and abandoned all. Witches who cursed mankind and were misleading noble ships to let them sink to the eternal depths where oblivion awaits. Shores filled with drowned and swollen men. Slowly rotting between the hungry seagulls. Broken by the ruthless sea, sliced by the sharpest of shells. Rancid murder and atonement. Haunted, wintry sand dunes. Restless spirits in search for retribution.

“The work of the devil is everywhere….”

These sources of creative inspiration are more specific aspects of what has influenced the band since their inception, i.e., the “desolate meadows, haunting winds, hungry sea, ancient spirits, occult myths, dark legends and bloody historic events” of the northern part of their homeland. But, as noted, the music captures moods that all will understand, regardless of where you make your home.

In thinking back on the five tracks that make up this release, I perceive them as moving through seasons and cycles of loss — the springtime of hope, the summer of broiling anguish, the fall of fading dreams, the winter chill of abandonment and grief… and a springing resilience once again. I don’t mean to suggest that the EP moves in such a deliberate sequence; to greater or lesser extents, these moods can be felt within almost every track.

Phrased in different terms, the music is tormented and tumultuous, and subdued and introspective. Despite its often depressive and anguished cast, it is tremendously vibrant, frequently reaching breathtaking heights of heart-aching and heart-swelling intensity and grandeur. It seems to transform the recurring pain of our fragile existence — of calamitous failure, grievous loss, and terrible longing — into magnificence.

Dwalend bij Nacht en Ontij (which might be translated as “Wandering in unusual places”, if my google results are accurate) is meticulously crafted to achieve these effects, with a balanced mix that makes all instruments and musical textures apparent, though the music so successfully carries the listener away that the last thing you’ll be doing (at least on a first listen) is dissecting the songs into their component ingredients. Instead, you simply become immersed in the push and pull, moving with the music from depths to heights, caught in the tides of these seas of sound.

At the core of these tracks are compelling melodies (expressed by keyboards as well as guitar) evocative of the moods I’ve attempted to describe, integrated with changing bass-and-drum rhythms that provide a close match for those changing moods, and augmented by caustically harsh vocals that are shatteringly intense in their tortured tirades. But this is also a beautifully embroidered tapestry of sound, which includes occasional acoustic guitar interludes, both sober and bright, ethereal and haunting.

Other aspects of the embroidery also stand out: the grand cascades of rising and falling melody and swirling, spiraling leads in “De Broedermoordvloek”; the striking contrast between the incendiary power and speed of the main currents of “Het Duivelsvuur Van Schiermonnikoog” and the somber chords (of a piano?) and sparkling guitar arpeggios that move more slowly through that torrent of intensity; the medieval resonance of the melody that comes to the fore in the second half of that same song; the combination of a depressive cast at the outset of “De Armemanskisten” and the spirit of resilience that comes through so strongly by the end; the bleak yet glorious symphonic overlay that carries “Het Dansende Duivelslicht Van Dood En Verderf” to its crescendo — and the sound of creaking timbers and breaking waves that follow the climax.

The EP’s final track is perhaps the least emotionally complex piece on the album, and the one that most evidently connects with the band’s explanation of what inspired the album. The drummer takes a break on “Geweeklaag Der Helleveeg” (though perhaps the shine of cymbals is in the mix), which is dirge-like, haunting, and hypnotic — the result of melding heavy, gloomy, moaning sound in the low end with the ghostly effervescence of the guitars and keyboards. Yes indeed, the work of the devil is everywhere. 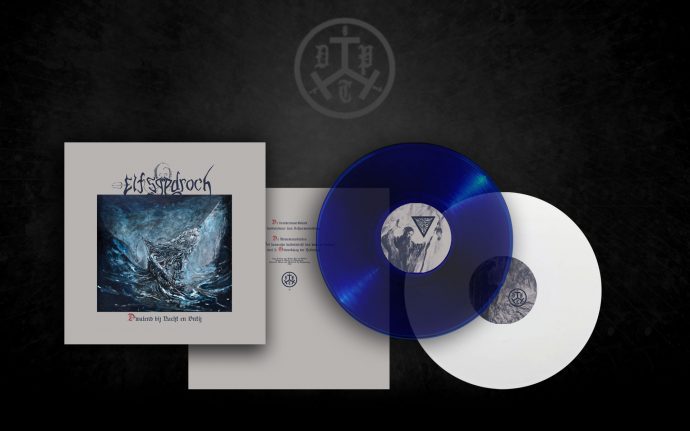 As you can tell, I’m intensely moved by what Elfsgedroch have achieved here. I would recommend it to fans of Panopticon, Agalloch, and Falls of Rauros.

Dwalend bij Nacht en Ontij was released through Diaphora Produktion on April 20th. It ‘s available digitally and in beautiful gatefold vinyl editions with a poster.