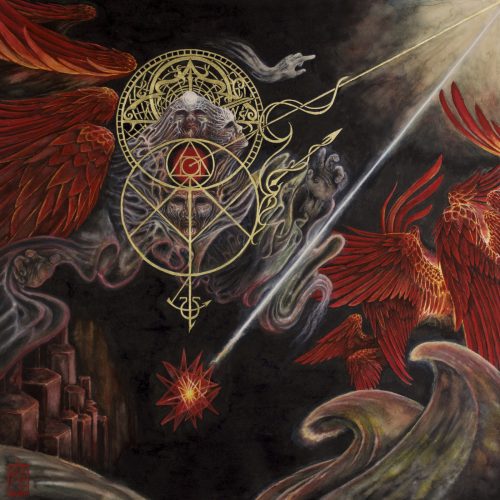 (Guest writer Conchobar returns to NCS and, with our thanks, provides the following writings about the debut album by Panegyrist as an introduction to our premiere of a track from the album named “Ophidian Crucifix“.)

[Panegyrist is an avant-garde black metal project comprised of, among others, artist Elijah Tamu, whose incredible visual talent has been featured on many albums, including the recent Metamorphosphorus split and of course the one discussed below, and drummer Marcello Szumowski, whose most recent work can be heard on Inferno’s Gnosis Kardias album (WTC 2017). Hierurgy, their debut album, will be released via I, Voidhanger Records on May 18, 2018. From the label: “Hierurgy – meaning ‘ritual’ or, literally, ‘holy work’ – is an expression of burning religious impulse. This collection of meditations explores the theme of theosis, the process whereby the individual is transformed and united with God through the operations of the divine energies’.]

Reviewers of music often drop into what I have come to see as a default template, particularly of albums and musicians they like: non-substantive introduction, brief encomium, and then a strange, magpie-like effort of nitpicking along a number of predefined trajectories:

1) it is too new, and hence alien, and strays too far outside the envelope

2) it is too much of what it is, and thus stays too comfortably inside the envelope

3) it is not what the reviewer imagined it to be, and thus fails to live up to some unspoken futurity that existed only in the mind of the reviewer

Musicians are thus caught between the Scylla and Charybdis of being told not to reinvent the wheel while being accused of patent infringement on the aforementioned wheel, all whilst navigating the back roads of the reviewer’s unmapped and poorly articulated expectations. This caveat lector is my justification for providing, in place of either a review or an interpretation, what I will frame as a reaction, and hopefully a response, to Panegyrist’s debut album, Hierurgy. 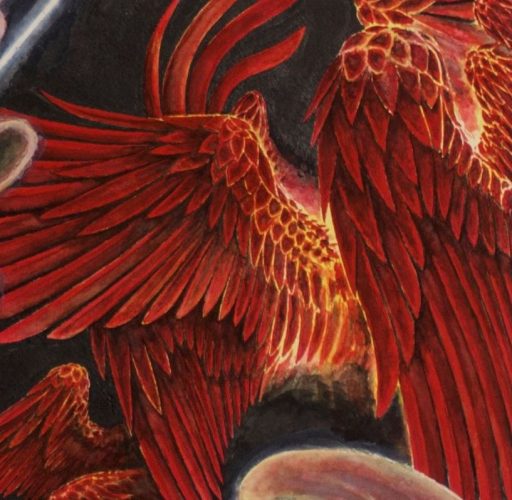 Because this is a densely imbricated and conceptually sophisticated album, which demonstrates both theoretical and musical sophistication and maturity, my objective is to map out some of those roads that I ended up following in listening to this Bildungsroman-like project. In this sense, I am avoiding the analytic in the sense of cutting into the depths of the album, and allowing the surfaces to engage in a wandering dialogue of sorts.

“Hymn of Inversion” serves as an impassioned introit to the mystical mass-as-journey of Hierurgy; it almost exists outside the album proper, ushering the listener into the immanence of the work as a gate of sorts. While these comparisons may seem strange, the sacred minimalism of composers like Arvo Part or the polyphony of the Basiani Ensemble are brought to mind here. The proviso is that this is not due to sonic analogy as much as the religious feeling evoked when one listens: the wanderjahre is one begun on the knees in Damascene dusk, in awe of the All.

“Idylls of the Cave” emerges like the Fall and falling of the dark night of the soul into the emptying of kenosis. It is a track that bears the traces of agon and aporia, of struggle and doubt, the doubling brought through trenchantly with both the doubled vocals and layering of clean voices in a tidal choral fugue.

The Philosopher begins his proper pursuit of spiritual transformation in “To Quicken Stone“; the frenetic undoing of material habitus makes this one of the most operationally complex tracks on the album. A floating, drifting perspicacity marks “The Void is the Heart of the Flame“; seeing himself as no-longer-apart, the Philosopher reaches a space of absolute lucidity, the pure, unadulterated field of the white gnostic elixir.

The step beyond and back into the self is accessed in “Ophidian Crucifix“, which is, interestingly, one of the most traditional songs on the album in terms of genre strictures. As everything here, the familiarity is not one of sameness, but of titrated and distilled essence. This is the Philosopher re-emerging, renewed and reassembled, from and by the pure white sands of the Desert.

Echoes of the entire journey, once disparate, now brought into alignment in a new wholeness, are invoked in “Hierurgy“. There is a strange sadness in this closing track, a longing that is hard to pinpoint and define – maybe it is the fact that all immanent peregrinations inevitably end but that the transcendence of journeying itself is endless. The listener is left with a haunting sense of the unspoken-unfinished here.

Listening to this album was an immersive and elevating experience, and I strongly recommend that others take the journey so painstakingly laid out by these artists. Look at the cover artwork while diving deeply; move from the position of the Knight of Infinite Resignation and take the hieurgical leap to become the Knight of Faith, at least for a time. You will be glad you did.

2 Responses to “AN NCS PREMIERE: PANEGYRIST — “OPHIDIAN CRUCIFIX” (AND A REVIEW OF “HIERURGY”)”