(Here’s another edition of Andy Synn’s Saturday interview series in which the subject is metal lyrics.)

Unless you’ve been living under a rock like some quivering, spineless invertebrate (I might pay for that comment later), you’ll doubtless be aware of the great waves caused by the latest Slugdge album, Esoteric Malacology (which I already dubbed “a potential Album of the Year contender”).

Of course if you haven’t done so yet, you should check it out immediately, and then go back and check out the rest of the band’s back-catalogue too.

Once you’ve done that, and you’re suitably prepared in both body and mind, then – and only then – should you return here and delve into the following interview with the band’s vocalist Matt Moss, where he provides some seriously in-depth insight into both the method and the madness which together make up the band’s unique lyrical approach.

Lyric writing and songcraft/structuring go hand in hand for me; it’s just the way I’ve always done things, so right from the beginning of being in bands I would generally be the one doing them. It boils down to how we compose music. I feel that the progression of a song should in some way mirror what’s being talked about through the lyrics. It doesn’t always work like that though; sometimes repetition is more appropriate for the sake of the music. My favourite way of writing is definitely the more progressive approach though.

As far as why I ended up a main lyricist, I think people generally just let me do it either because they couldn’t be bothered, or felt like it would be easier for everyone to just let me have my own way!

There is a very common theme in almost all the lyrics I’ve written but it’s quite a broad one. As time went on I got better at articulating it though, as earlier attempts were somewhat scattered, which could also be put down to how my brain works. Nowadays I tend to fall back on the “word salad” approach as it seems somewhat fitting, although they’re not nearly as nonsensical as they used to be.

To me lyrics have always been important, they give context to the music; they give it meaning, even if it is difficult to pick apart. It’s the difference to me between background music and something you can grapple with and think about. Vocals themselves I think are distinct and their own thing; an instrument, be they percussive, melodic or just harsh. You can tell a story with music alone sure, but if you can do that and weave in some kind of lyrical narrative that’s even better, although it doesn’t always work out as you’d planned. 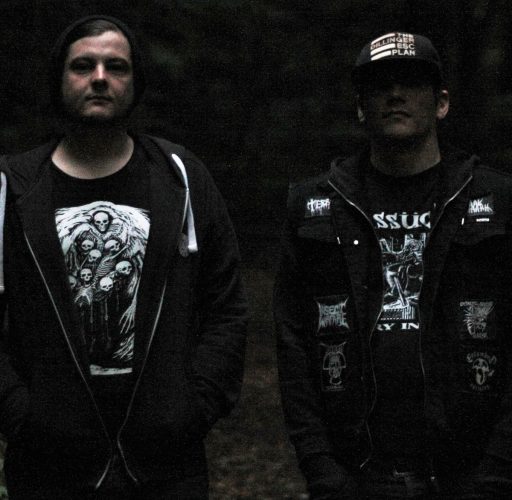 Most of the lyrical inspiration comes from my own life experiences, channelled through the lenses of philosophy and absurdity to either focus them, or dilute them to make them more palatable for both the audience and myself. There are sources from which I draw directly, usually writers who to me mirrored my own discontent with the world around me, but I’ll often twist the subjects so much that they might become increasingly hard to discern from the mythos we’re rooted in.

I really do love when people can draw their own interpretations from lyrics, but of course the lyrics have a personal meaning. Madness and civilisation would be the words that best describes the bulk of what I write, and that’s only partly a reference to the book by Foucault. As I’ve said numerous times in the past, insanity has plagued me my entire life in a way I can’t really overstate, and so fantasy was always my escape from that reality. Auditory hallucinations are a daily problem, but sometimes they come up with good lines and melodies. One good example of this was “The Sound of Mucus” from the album Gastronomicon, which the rain “sang” to me one evening. I like the simplicity sometimes:

The ongoing critique of civilisation throughout our lyrics is more focused on the process of domestication than it is the ills of technology or the environmental damage we cause, although that features occasionally as it’s always worth reminding people. Unfortunately for me I suppose, my first foray into this topic was through Industrial Society and Its Future by Ted Kaczynski, which was a stepping stone for me to authors such as John Zerzan, who speak of similar things but in a much more refined fashion, and don’t feel the need blow people up, which is something I obviously do not agree with at all.

Naturally, space and the prospect/lack of alien life features heavily, which is mainly down to my passion for the work of H.P. Lovecraft, who formulated the grand mythos from which I drew heavily. I drew from his method of transposition too, although for me it was a distrust of our culture’s trajectory, rather than a fear of foreigners. I see humanity as being trapped collectively, rather than looking for individual groups to point the finger at.

Almost everything written by my friend Kevin Tucker of Peregrine has been an influence on me. He writes in a very similar style to me, and about the same things.

One part from “Anatomy of the Machine” I like in particular:

It could never have been sustained

We are the cancer in this iron cage

It carries on because we believe, that we are more than cogs in this machine

It pulls the reigns on all our lives

Until we realize, that the grid is the enemy

I also love the lyrics of Agoraphobic Nosebleed, be they by J.R. Hayes (Pig Destroyerare also amazing) or Jay Randall. They are often so bizarre and yet hit like a sledgehammer.

One example that I liked the most was from “Dick To Mouth Resuscitation” from the album Agorapocalypse:

I slapped a dead man in the face

With his own hand and laughed out loud

Self-awareness on a level

It’s not the weed or all the bullshit I read

It’s the fucking disillusionment and suffering

Of every living being

My lyrics rather quickly moved away from talking “directly” about myself. I just find it better overall to speak more broadly about certain subjects and to distance myself from them to make things easier for me and the listener. Also, with certain subjects especially in this genre, and particularly with fantasy, I think that distance is safer on the whole. I wouldn’t want people to take everything in there literally.

I’m always trying to refine what I say and the way I say it, while simultaneously attempting to provide an opposing view; although when you’re as fanatical and stubborn as I can be, that’s difficult. The mythos we’ve created can always be developed more too, although it has to make sense within the underlying framework of the lyrics.

A good early example is “Lettuce Prey” from Gastronomicon.

This song is about industrial agriculture and its effect on the environment; this is quite evident in lines like:

I was talking very directly about fields. We tend to see that as nature, but it’s not nature, it’s man killing everything over millions of acres in order to grow more humans. As the song progresses it touches on other problem areas such as surface run-off; specifically, when pesticides and fertilizers contaminate rivers and irrigation systems that then pollute downstream ecosystems, the main one being the ocean:

cascade into an airless void

This is a reference to algal bloom and acidification of the oceans. Oceanic anoxic events in particular have been the source of mass extinction events in the past. The song touches on Thermohaline circulation collapse and other areas, but then changes towards the end of the second verse to talk about slugs (of course). Not just slugs, but all manner of creatures that experience a population explosion as a result of the abundance of this new food source, effectively unbalancing the biosphere. This inevitably being our downfall:

Trapped in a spiral of supply and demand

Feeding new mouths to in time work this land

Of the lies made by the madmen who extract and consume

Of a hewn and exploited world

Which is a weird roundabout way of saying that the rich will just bury themselves in underground shelters once they’ve taken what they need from us. Or fly off into space (see “Slimewave Zero”), either works, that is to say, the majority of us will be left in the wasteland.

The rest of the song is about how the only thing left will be the proven survivors of this world, the same extremophiles and basic creatures from which all life arose in the first place; those in the deep sea:

Dark below where no light lies

Final bastion of the deep

The next song “The Sound of Mucus” continues the theme, although lyrically more simplistic as I’d said earlier, which felt more appropriate for the vocal style.

A fairly good example of what I tried to explain initially about song construction and lyricism would probably be “Salt Thrower” from Esoteric Malacology.

The song itself is about salvation through madness as a response to suicidal depression. The first half of the song is fairly slow and melancholic musically and the lyrics are about an attempted suicide by hanging, which should be fairly obvious with lines like.

Falling from the creaking rafters

Pressure, so much more than you imagined

It’s followed by a very quiet section, which symbolizes the calm before the storm, so to speak, and the very literal chemical sedation (which isn’t surprising). After this the song ramps up, and this is representative of the psychotic meltdown which would soon follow. The lines here are about that insanity being the only appropriate response to nihilism and hopelessness which got us to this point, and the “monster” is thanatos; the death urge, not madness itself:

Negated by the unbearable truth

Fall to a lifeless self-destructive end

For there is a monster in the heart of all men

The song then gets faster, more complex, more discordant and jarring. This section is meant to symbolize the instability of this new balance, the conclusions I came to through my own experiences, and the ramifications later on down the line. In particular there are references to occultism and submitting oneself to that darkness while in the grips of madness:

Relinquish all your earthly bonds

And bow before the god of madness,

Let him untether you from pain,

Step outside the circle and be saved

The song ends unresolved and abruptly, because this story is far from over, for me or anyone else. So there was a point there.

I think this one displays quite well how we’ve developed this way of writing which is a hangover from earlier. It’s also in there because I’d become depressed again during the writing of the album, and I had believed that to all be in the past. You’re never truly done with it; you just get better at dealing with it.

I expect to keep following this theme, there is a surprising amount of material to work with. The narrative is fairly engaging and fun for me despite often being about fairly serious topics; it’s just one way of telling a story. I’m not really out to convert people, but if this topic interests them there are a number of grindcore bands, such as Insect Warfare and Maruta, who touch on these areas. And, as for Death Metal bands; there’s Gojira obviously, and Peregrine specifically.

I really appreciate the opportunity to talk about lyrics so thank you for that. They are so often an afterthought for some bands and listeners, which is a shame.

Particularly with a band such as Slugdge they can often get lost in translation, and that’s not entirely by accident either!