This being a Sunday, you might have been expecting a SHADES OF BLACK post — and there will be one later today — but I wanted to recommend some other new discoveries first. The music in this collection is more genre-scattered than the format of SOB would allow, but I have included an excellent new black metal track at the end, sort of as a segue from this post to the next one.

By the way, I decided not to include the new tracks that appeared last week from At the Gates, Marduk, Skeletonwitch, and The Agony Scene, despite the urgings of some of my NCS comrades, mainly because I wanted to go more under-the-radar (and also because I had mixed feelings about a couple of those tracks). But if you missed them, the hyperlinks will take you right there.

I would have listened to the new Construct of Lethe song eventually, even without seeing the headline for Toilet Ov Hell’s premiere, because I have very good memories of their 2016 EP, The Grand Machination, for which we ourselves premiered two songs. But I got to the new song faster after seeing this headline, though I did allow enough time to enjoy the entire ToV article first: “CONSTRUCT OF LETHE BRING RIFFS SO THICC THEY’LL CLOT YER DICK“.

The song is “The Clot” (and now you understand the italics in the headline). The album is Exiler. It will be released by Everlasting Spew on June 20th. For the cover, the band or the label chose an excerpt from a wonderful painting I’ve admired before by Adolf Hiremy-Hirschl, depicting Hermes Necropompos on the banks of the Acheron, conducting the shades of the dead from the upper to the lower world (in the full painting, Charon and his boat are visible in the distance).

Although my dick feels no more clotted than usual, I do feel that some new skull fractures have opened and my guts feel more than typically roiled. As ToV’s intro noted, the song has a hell of an intro section, and then the full-throttle rampaging begins in earnest, an experience that’s both blood-freezing in its murderous cruelty and blood-boiling in its ferocity. The eerie guitar leads, the fanfare-like bursts of melody, the swirling dual-guitar solo, the electrifying drum work, and the mountainous grooves further make the song stand out like a beacon in the stygian depths of the underworld. 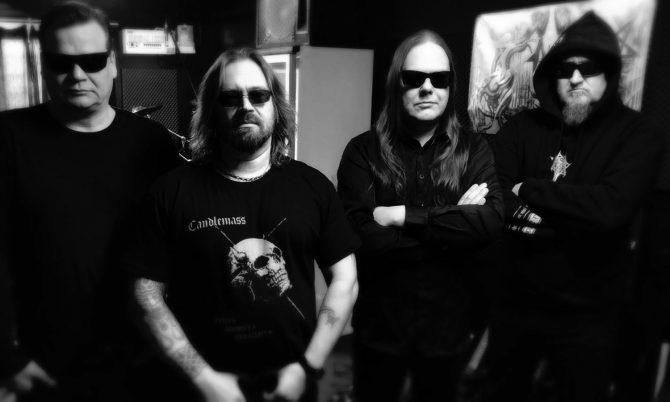 Even without the lyrics and the imagery in this next video, I still found this next song frightening (and frighteningly good). But the whole video package is effective in amplifying the music’s unsettling atmosphere.

“Dusk Demons” seizes attention immediately through the soaring, ominous grandeur of its opening melody and the gravitas of its slow, booming rhythm, but other dimensions open up as the song unfolds. The music retains its aura of terrible and titanic majesty, but the explosive vocals (which are somewhere between a choking gurgle and a throat-straining bray at first, and become increasingly unhinged in their intensity) exude a fearsome agony, while the lead guitar creates a feeling of despair mixed with fear.

I haven’t been able to get this song out of my head since first hearing it, and I’ve found that it looses none of its electrifying impact on further listens.

The members of this new Finnish band come from the ranks of Protected Illusion, Unholy, Sinisthra, and Impaled Nazarene. The song is destined to appear on an as-yet unfinished debut album, which is projected for release by Saturnal Records in late 2018 or early 2019. Based on this first foray, it will be well worth watching for. 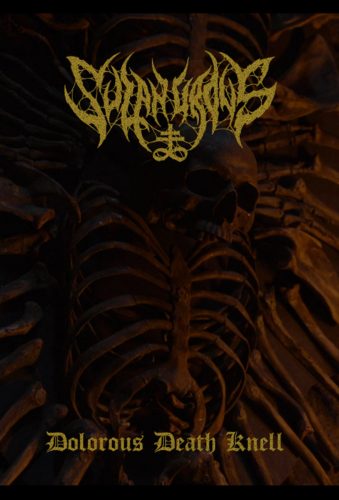 Dolorous Death Knell seems to be the name of a forthcoming debut album by the Danish death metal band Sulphurous, whose two members include such other bands as Taphos and Phrenelith on their resumes (and whose January 2017 EP Abomination Temple I reviewed here). I say “seems to be” because the recently constituted Bandcamp page for a release by that name states: “Tape version of the LP On Extremely Rotten Productions… releases May 4, 2018.” I can’t find any other info about it.

The two songs on that same Bandcamp page — “The Flickering” and “Dolorous Death Knell” — were previously released at the end of last year under the title Promo XVII. Thanks to the Bandcamp alert for this forthcoming longer release, I finally found them.

The first track kicks into high gear right out of the gate, its grim, ravenous riffing and spine-jarring rhythmic jolts flooding the bloodstream with adrenaline in short order. While making room for a couple of slow and sickly doom-stricken interludes, the song is a battering and bloodthirsty delight, made all the more gruesome by the cavernous, roaring quality of the vocals and the preternatural eeriness of the soloing. The title track rips and rages as well, again melding the galvanizing effect of heartless tremolo’d buzzing, obliterating drum-and-bass variations, sinister melody, and monstrous vocals; in its slower-paced finale, it will also stomp you flat as a pancake.

If your ass is dragging after a hard Saturday night, the 10 minutes you spend with these two tracks will wake you the fuck up. 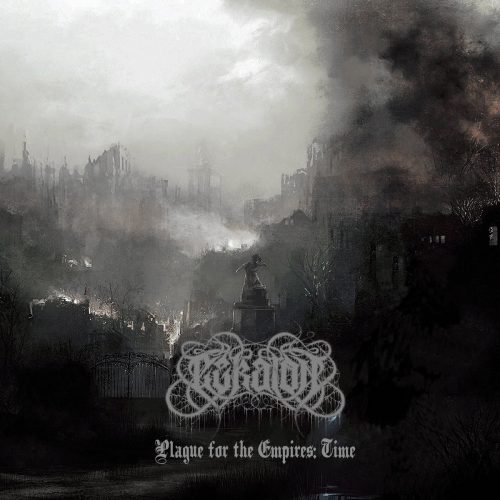 And now here’s the black metal song I mentioned at the outset, to provide a transition from this post to our usual Sunday SHADES OF BLACK installment, which will arrive whenever I finish writing it.

Plague for the Empires: Time is the first album by a Ukrainian band named Ezkaton. It follows a debut EP that was self-released in February of this year (The Ashbringer), and it’s set for an April 30 release by Wolfspell Records, who characterize the music as “Atmospheric Depressive Black Metal”.

The first advance track, “Method of Despair“, is a spellbinder. The slow, solo guitar reverberations that launch the song are heart-aching and mystical; they echo in the mind like the haunting memories of lost chances and vanquished dreams. The music’s intensity expands like a nova, becoming both more tortured and more magnificent. The song rockets skyward, gleams with a glorious sheen, and falls slowly to earth again, burned black by the sun, surrounded by ashes that drift like mist. What a powerful experience this is.