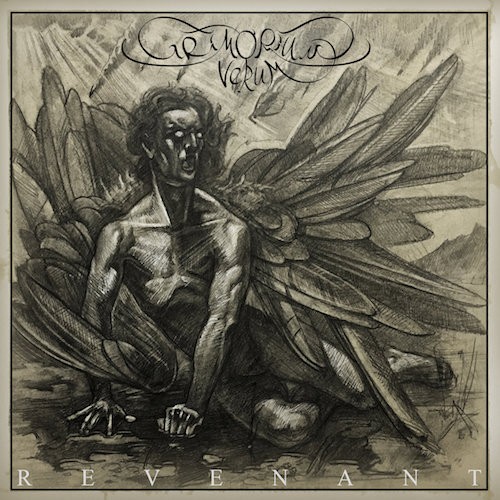 It seems that for many years I’ve been mis-using the words “bombastic” and “grandiose” in my scribblings about music. As an acquaintance more literate than I recently pointed out to myself and others, the dictionary defines “bombastic” as “high-sounding but with little meaning”, “inflated”, and “given exaggerated importance by artificial or empty means”, while it specifies that “grandiose” refers to an “affectation of grandeur or splendor” or something characterized by “absurd exaggeration”.

What I’ve often intended by those words, though clearly failing to express the intention accurately, is music that’s dazzling in its power, perhaps ornate in its trappings, resplendent in its atmosphere of vaulting majesty — music that’s grand instead of grandiose. Those are among the impressions I had when first listening to the music from Grimorium Verum’s new album, Revenant, including the album’s opening song which we’re presenting today — “The Born Son of the Devil“.

Symphonic metal bands, including symphonic black metal bands, can be guilty of theatrical excess, and of using the dramatic emotional power (and sonic power) of orchestral instrumentation in ways that just don’t fit very well, as if tacked on in a futile effort to give a mediocre song the kind of gravitas or inspirational effect that were beyond its creators’ grasp. But in the Grimorium Verum song you’re about to hear, it is integrated with other elements of sound in a way that well-serves the music’s overarching atmosphere and its dynamism.

No doubt, the song is constructed to build dramatic power, beginning with the ominous pulsations of strings and the hammering of timpani in the song’s introduction, while also introducing a mystical aspect to the sensations through the rippling of piano keys, which add a glimmering, ethereal nuance. And then suddenly, the music swells in intensity, the drums thundering and snapping, the keyboard music soaring, the lyrical proclamations vented in a scalding goblin-like snarl. Blasting percussion and heavy, furious riffing turn the mood in a grim and sinister direction, with harsh roars conjoined with those wrenching shrieks in the chorus.

But the crescendo of this satanic pageant is yet to come, preceded by an interlude of organ music and choral voices rising in reverence. The choir continues to lift their voices as the music again swells in power, reaching a climax with the aid of a fiery guitar solo.

Revenant is this Russian band’s fourth album in a career that began in 1996 (with a long hiatus that preceded the release of their first album in 2008). It will be jointly released on May 5th by Symbol Of Domination (Belarus) and three U.S. labels — Cimmerian Shade Recordings, The True Plague, and Black Metal Records. Pre-order links are below, along with the full track list.

We’ve also included three more previously released tracks — “The Resurrected On the Devil’s Hands”, “Blind Faith In Nothing”, and “The Circus of the Dark Illusion” (a free download at Bandcamp) — in addition to our premiere of “The Born Son of the Devil”.

One Response to “AN NCS PREMERE: GRIMORIUM VERUM — “THE BORN SON OF THE DEVIL””