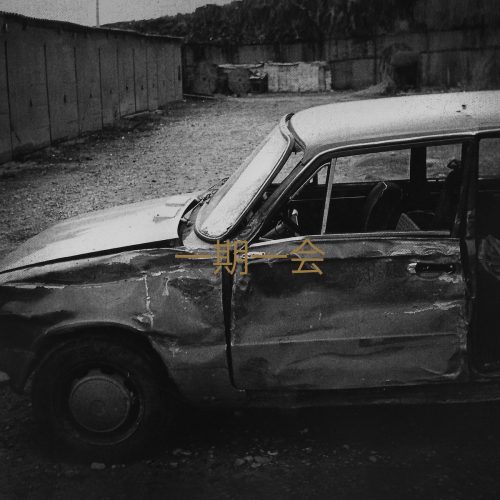 If you managed to catch the 5772 record released last fall by 夢遊病者 (Sleepwalker), then you already know how difficult it is to describe the music of this band. I haven’t heard anything else like 5772… and I haven’t heard anything else like this band’s new LP either. They have boggled my mind again. “Visionary” seems like too pretentious a word, and “genius” might come off too strong, but it’s definitely ingenious — so bewilderingly creative that I’ve become transfixed by it.

The name of this new release is 一期一会 (Ichi-go ichi-e). That title is a Japanese idiom that can be translated as “for this time only, never again”. I’ve learned from The Font of All Human Knowledge that it is often associated with Japanese tea ceremonies, the characters often “brushed onto scrolls which are hung in the tea room”. “The term reminds people to cherish any gathering that they may take part in, citing the fact that many meetings in life are not repeated. Even when the same group of people can get together again, a particular gathering will never be replicated, and thus, each moment is always once-in-a-lifetime”.

Sleepwalker‘s idea behind this new record, we are told, “was to take central superstitions that rule the rhetoric of eastern lore and funnel them through the prism of the modern world.” Sleepwalker also seem to have access to a musical prism as well.

As I listened to the record I had flashbacks to the music of other groups… but so many decades had passed since I last listened to their music that I had to dig deep in my memory banks to retrieve the names. The ones I found were Return To Forever, John McLaughlin’s Mahavishnu Orchestra, and hints of Abraxas-era Santana. Those names might not mean much to many of you; they’ll be hallowed names to at least a few.

But these are also imperfect references, because Sleepwalker have passed the sounds of jazz fusion, psychedelia, and funk through a prism crafted from raw black metal, with further impurities in the crystal due to veins of necrotic death metal, nuclear-strength grind, violent hardcore, and probably too many other elements to identify accurately. At one point in one song you’ll also hear the melodies of flamenco guitar and a violin.

There are three unnamed individuals in this band who might never have met in person, given their widely dispersed locations — Osaka, Japan; Tver, Russia; and somewhere in New York. How they managed to combine their talents in executing such an unusual musical vision is itself a mystery. How could they have communicated such bizarre concepts and unusual inspirations among themselves in words? I’m not referring to the possible obstacles raised by differing native tongues; I’m referring instead (again) to the difficulty of describing the music in any words, and then mapping out how to make it work.

The press materials for the record drop names like Voivod, Zeni Geva, Oxbow, King Crimson, Ornassi Pazuzu, Lurker of Chalice, and Xasthur. An internet acquaintance with a broad musical palate (Rennie from starkweather) referred to a “crazed world where GISM collides with Nuclear Death, O Yuki Conjugate and diSEMBOWELMENT“, along with “grimy Maiden harmonies”. I still maintain that those bands I mentioned earlier are also godfathers to this mutated offspring.

The one song we have for you today — “No Premature Celebrations” — is one of the two longest tracks on this new record. It has a few things in common with the other tracks: It’s musically dense; it’s often surrounded by a howling gale of abrading distortion; it’s driven by truly eye-popping drumwork and tremendously vibrant fretless-bass lines; it includes the kind of incinerating vocal extremity one might expect from a man being forced to drink hydrochloric acid while having his body etched by a blowtorch; and it changes without warning, but the changes somehow make sense.

It’s smooth and cool, searing and soaring, riotously violent, trippy as hell, entrancing, and disorienting. There might be a saxophone in there, or a guitar tuned to sound like one. You’d have to slow the song way down to pick out all the sounds and try to identify their source. But that’s only if you’re obsessively curious. Probably best just to listen to it at normal speed… about a dozen times.

一期一会 will be released by Sentient Ruin on May 25th (co-released in the EU by Annapurna). There’s one more track you can listen to right now — “Never Through A Threshold” — which premiered at Invisible Oranges. Check that here.

TRACK LIST:
1. Sitting for the Road
2. If Return – A Mirror Glance
3. Never Through a Threshold
4. No Premature Celebrations
5. Never Ailments on Oneself
6. No Clinking of Glasses

One Response to “AN NCS PREMIERE: 夢遊病者 (SLEEPWALKER) — “NO PREMATURE CELEBRATIONS””