(We present DGR’s review of the new album by some Swedish upstarts whose name will eventually be well-known if they keep doing stuff like this. It will be released on May 18th by Century Media.)

You’d be forgiven if, like your dear author here, the shock of At The Gates being an active band still hasn’t worn off yet. It’s been four years since the release of 2014’s At War With Reality, the group play shows and tour regularly, and yet every moment they’re around feels precious.

Recording an album that has transcended into a metal cultural landmark and leaving a near-twenty-year gap until the next one will do that to you, one guesses. Yet, here we are on the cusp of a second release from the group after that long hiatus in the form of their sixth album, To Drink From The Night Itself, and the first to feature new guitarist Jonas Stålhammar (whose own resume is pretty stacked and most recently played alongside vocalist Tomas Lindberg in their more old-school-focused The Lurking Fear).

In the lead-up to At War With Reality we all had a lot of fun pontificating on the many thought exercises of “What will a new At The Gates album sound like after the band has been gone for so long”, as the band had essentially watched and been part of a whole genre-explosion while its various members were involved in a slate of other projects. When the album was released, the answer was a pretty solid “it sounds like At The Gates” — which has to be one of the most frustratingly difficult things to pin down.

The group’s quick-moving and melodically minded Gothenburg two-step fueled so many songs over the years, and yet At War With Reality demonstrated that if anyone was going to sound like them, it was going to be them — and confidently so. They conveniently side-stepped the “we must top our biggest album” quandary (though still preserving a fair share of Slaughter Of The Soul DNA) by aiming a little older, firmly ensconcing themselves in the earlier eras of their career and combining those with their later parts.

Which brings us to To Drink From The Night Itself and the slew of similar thematic questions it provokes, with one of the biggest being, “How do you follow up a successful comeback release like that?”, and how do you do so when you’ve had a pretty integral lineup shift in the band? It seems that for At The Gates the answer was relatively simple, which was to once again — and this time more insistently — sound like At The Gates.

The group immediately shift into high gear with the title track (and first-revealed song from this album) after an orchestral intro, which also resurfaces to bookend the last song on the album. In the annals of “songs which follow the intro that really kick the album off” (we’re still workshopping the name here) “To Drink From The Night Itself” has to be one of the most recognizable in both purpose and form, as well as one of the most recent best examples of that. While the formula of “instrumental intro into high-speed first song” is easily recognizable, there’s no denying that when the formula is well-executed, it still works. In the case of “To Drink From The Night Itself” it provides that instant jolt to the system that leaves the listener with an excellent first impression.

Veering about as close to their Slaughter Of The Soul material as they can get within the song, “To Drink From The Night Itself” still contains a couple of surprises in the midst of the quick-fired pace and the hoarse vocal delivery shredding throughout the song. Of particular note is the drumwork, which isn’t something that has stood out too often with At The Gates, as they’ve been a more guitar-focused group during their career. And so even the brief solo-drum segment in “To Drink From The Night Itself” is a bit of a surprise — it breaks up the pacing of the song, in case you thought they’d immediately dive back into that main guitar riff over-and-over every time the titular words are uttered (as awesome as that is each time).

This is a running theme throughout To Drink From The Night Itself as a whole; At The Gates don’t break their genre molds but happily poke, prod, and play around with the various aspects of death metal alongside their melodeath bread-and-butter to keep things interesting. 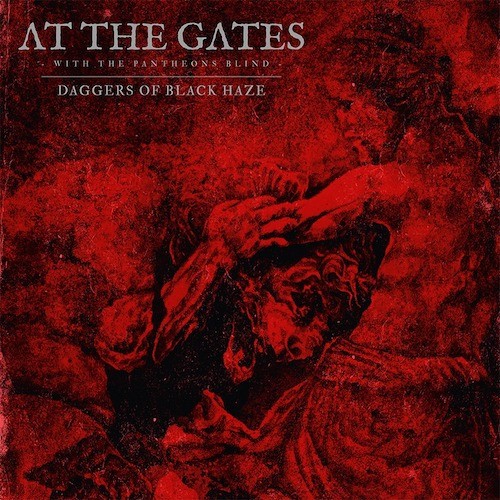 At The Gates also strike a pretty rich vein of inspiration in their darker atmospheres this time around. There’s a grouping of songs on the album that present a mid-tempo bouncing structure, and a moody pall hangs over the whole affair. This grouping contains songs like “A Labyrinth Of Tombs”, “Daggers Of Black Haze”, and “The Colours Of The Beast” — though “A Stare Bound In Stone” makes a run for inclusion in that group as well, but instead treads the middle ground of moody and desolate while shifting back into speedier form at the drop of a dime. “A Stare Bound In Stone” and “Palace Of Lepers” as they are paired together on the disc make for a pretty good sequence of forceful headbangers, especially as “Palace Of Lepers” seems to take cues from “Stare’s” moodier atmosphere and builds from there, going for a more constant groove and letting the rhythm section really drive that song for a good chunk of it.

“A Labyrinth Of Tombs” with its At The Gates mad-lib of a song title (At War With Reality had songs named “Heroes And Tombs” and “Death And The Labyrinth” on it ) is the quicker-moving of the previously mentioned three. Where it gains its grimmer atmosphere is in the parts following the hammering verse segments, where the rhythm section slows down and the guitars start to layer in on top of each other, adding a cavernous echo as they build into the back third of the song before its closing guitar leads. “The Colours Of The Beast” has to be brought up in some form, simply because it is the meat-tenderizer of To Drink From The Night Itself. That instantaneous and slow-moving chug is such a marked change of pace from the faster tempos which characterize much of the album.

Those who seek solace in that comfortable, speedier, one-two beatdown that At The Gates are known for will continue to find plenty to enjoy on To Drink From The Night Itself. There are a handful of songs in which that pace is the constant through-line, and the rest are interspersed and interwoven into the other tracks. Of the quicker and more up-front songs, “In Death They Shall Burn” is a standout in the tail end of the album. Feeling like a reprisal of the album’s opening song, “In Death They Shall Burn” moves with a lethal ferocity that is matched on the lyrical front.

Arriving after a string of atmospheric and moodier mid-tempo songs, “In Death They Shall Burn” snaps the listener back to full attention and for its four minutes consistently comes back around to the shouted refrain of “Even in death they shall burn!”, built around some excellent cymbal catches. That will likely doom the song to be a live staple from here on out. It’s a straightforward headbanger of a song, built from much simpler bones than many of the songs preceding it, but one that is practically purpose-built to be a mosh pit in song form, and that is where it truly succeeds. It is one headbanging segment after another.

The true surprise credits, though, belong to “The Chasm” and the back half of “In Nameless Sleep”, which feel like multiple strains of the At The Gates crew’s other projects spilling over into their current incarnation. The punk-fueled drum-and-gallop of “The Chasm” is likely going to catch some people by surprise. The band work in a bit of the up-and-down hammering nature of Swede-death and d-beat into the sound; coming in after five songs of near relentless melodeath two-step, it’s a nice change of pace. There’s a pleasant shade of Disfear bleeding into that song in particular, though a lot less bass-guitar-driven.

“The Chasm” is a different breed of pit-riffer on To Drink From The Night Itself, but one whose intentions, like many songs on this release, are still immediately stated and spelled out. The fun part, though, is that “In Nameless Sleep”, the song that immediately follows it, feels like the band couldn’t quite let that feeling go. In its last minute they change over from another beast built out of speed and ferocity into that same drum battering that much of “The Chasm” is built out of, with a squealing guitar solo on top of it for good measure. For a little over seven minutes you could safely hazard to describe To Drink From The Night Itself as AtG having “fun” with the music, instead of presenting one lethal lesson in melodeath after another.

To Drink From The Night Itself  continues to earn At The Gates excellent marks on releases since their return. Even with a pretty important lineup shift within the band in the lead-up to the album, they’ve managed the delicate balancing act of providing reassurance while delivering new material that is well worth your listening time.

Granted, there is always going to be something in At The Gates‘ sound that is designed to keep the dopamine levels high, but the band are one of the few out there who also seem able to write a mid-tempo to slow melodeath song without it devolving into a mélange of dull and boring riffs. They keep things lively and change things up just enough, in between each delicious morsel of straightforward and lethal melodeath lesson, to make a listening session dynamic.

There’s a reason why a lot of metalheads have put At The Gates on such a high pedestal over the years, and very few other bands have ever been able to come close to those heights, even during the band’s period of inactivity. To Drink From The Night Itself, with its urgent and more insistent nature, is likely to keep things at that status quo. It is another fantastic collection of fast-paced guitar and drum assaults that  further cements At the Gates as a hallmark of their genre.