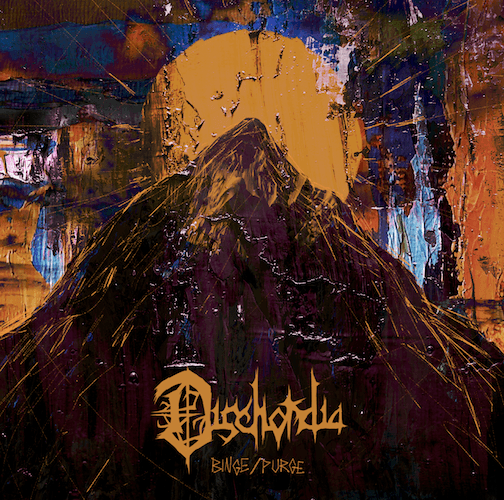 On June 15th the Oklahoma City progressive death metal band Dischordia will release a new two-track EP inspired by Dante’s The Divine Comedy, the title of which combines the names of the two songs: Binge/Purge. Each song is a long one; the two together provide just over 24 minutes of explosive and bewildering sound. The decision has been made to preview the music through excerpts of the music rather than through complete track streams, and today it’s our genuine pleasure to bring you the opening four minutes and nineteen seconds of the EP’s first track, “Binge“.

Dischordia’s last release, the Thanatopsis full-length in 2016, caught us a bit by surprise. As our own Andy Synn wrote in his review of the album: “With a sound reminiscent of both the old (Spheres-era Pestilence and Obscura-period Gorguts), and the new (Decapitated, Meshuggah) schools of Death Metal, the nine tracks which make up Thanatopsis find the band flexing both their mental and physical muscles more than ever before, while also curtailing some of the unfocussed ambition of their previous album and redirecting it down a darker and more progressive pathway”

Andy also proclaimed the album “undoubtedly just that much more ambitious – both in scope and in execution – and that much more vicious, than 90% of everything else that you’re likely to have encountered this year”. Little did we know that Dischordia’s ambitions and musical progressions weren’t anywhere close to being exhausted with that album. Binge/Purge takes what the band accomplished on Thanatopsis and pushes it to an even higher and wilder level. 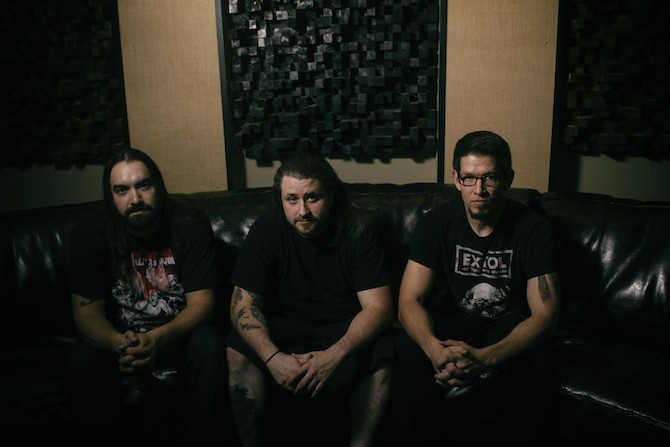 The complete extravaganza of “Binge” tops the 11-minute mark. It is a magnificent, mind-melting mini-concerto of menace, madness, and merciless marauding. Through its intricate — indeed, labyrinthine — plotting, it becomes a sonic kaleidoscope, the rapidly moving parts constantly changing and continuously setting off fireworks in the listener’s mind, providing an enormously electrifying, non-stop thrill-ride.

The band’s progressive-minded inclinations are given free rein, and turbocharged energy. Tempos and time signatures change in an eye-blink; the rhythm section jackhammers, jolts, jars, and batters, while engaging in ingenious (and complex) interplay both with themselves and with the guitarists, who roil the mind with rapidly veering fretwork, bursts of swirling and spiraling dissonant melody, and eruptions of feverish note flurries.

Just as bewildering as these high-speed acrobatics prove to be, the song is also a serious mauler, loaded with pavement-cracking demolition work, thanks in part to doses of jagged bass gouging, skull-splintering drum assaults, and bestial vocal roaring and shrieking. But the song includes still other dimensions as well — in the back half of the song, for example, there’s a fascinating section highlighted by rapid, skittering, jazzing picking over a riveting rhythmic pattern, and the atmosphere turns brooding and ominous as well (embellished with solemn clean vocals).

Those 11 minutes fly by before you realize you’ve spent that much time with the music. The excerpt we’re bringing you will seem to fly by even faster. As a teaser, it’s a cruel tease — because there’s so much more vicious joy to be had in what comes through the balance of the track.

And then there’s “Purge”… but we’ll let someone else address that song at a later time, though perhaps it won’t give away too much of the game (only a little) to identify the participants on this EP, and the instruments they employ:

Well, I guess we might have just delivered another cruel tease. More cruel teasing will likely follow whenever Dischordia see fit to deliver an excerpt of that astounding second track.

Given the kind of music they composed for this EP, Dischordia couldn’t have found a better partner than Colin Marston (Gorguts, Krallice) for the mixing and mastering of the record, and it was indeed he who handled those responsibilities here.

You can pre-order Binge/Purge via the Bandcamp link below — and follow the band on Facebook to keep up with further news about this release.