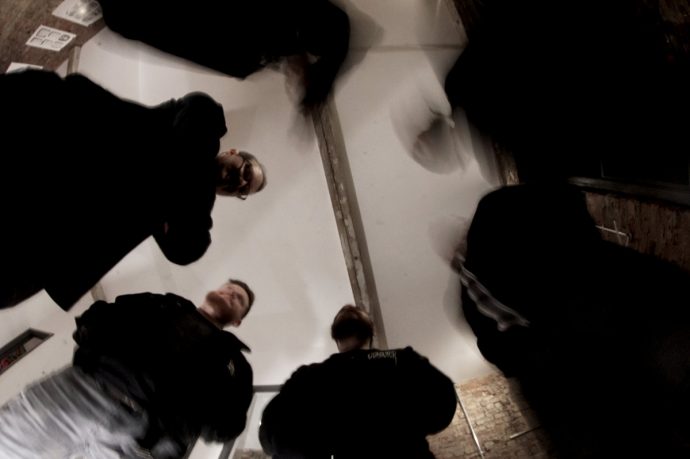 Be that as it may, however, I’m hoping there’s enough variety contained within these three albums – some of which you might say are a little bit off our regularly beaten path here at NCS – that most of our readers will be able to find something they can engage with and enjoy. 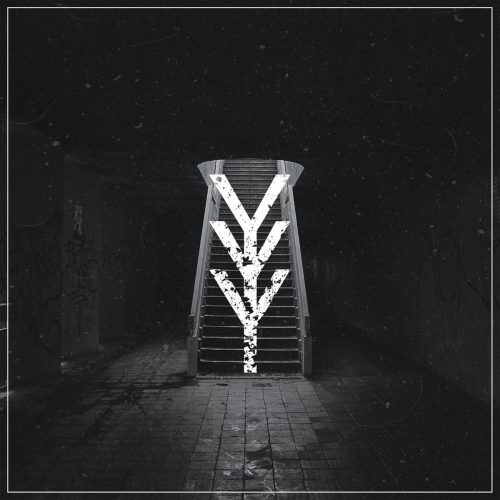 The word “heavy” is used a lot when writing about Metal. Which I suppose isn’t surprising, since the original moniker for the style was exactly that – “Heavy Metal”.

But these days the specific term “Heavy Metal” tends to be reserved mostly for a specific strain of purposefully retro bands, while the more general descriptor has expanded to be used in several contexts – heavy in aggression, heavy in subject matter, heavy in atmosphere, heavy in emotional content… these are all valid uses of the word “heavy”.

So let me be clear, when I say that this is one heavy album, I mean that in several senses, but mostly I mean it to refer to just how sonically weighty these eight songs are.

Dealing in an imposing and immersive brand of doom-laden, sludge-scarred Post Metal, Hundred Year Old Man have been making waves on the UK scene for quite some time now, and in fact already released an EP earlier this year (which we foolishly failed to cover, I am ashamed to admit).

Of course the obvious touchstones are still relevant – Neurosis, Cult of Luna, and particularly Amenra – but the Leeds-based collective have clearly put a lot of thought and effort into carving out their own particular niche in the already crowded arena of Post-Metal.

The distorted, atmospheric intro track soon gives way to the titanic “Black Fire” (previously released as a stand-alone single and re-tooled here for maximum impact), which provides almost eleven minutes of massive riffs and minimalist ambience, anguished howls and abrasive dissonance, followed in quick succession by the densely-packed distortion and moody melodic undercurrent of “The Forest” and the haunting calm of “Clearing the Salients”.

“Long Wall” is definitely the doomiest, probably the heaviest, and possibly the best song on the entire album, delivering a depth-charge of humongously heavy riffs and gut-churning rhythms right to the base of your brain, with the nerve-jangling “Disconnect” not far behind, supplying an additional dose of moody menace and surprisingly beautiful melody.

Following the ethereal interlude of “Cease”, the album closes out with the slow-burn soundscapes and gargantuan grooves of “Ascension”, which steadily builds in both density and intensity as the minutes progress, while introducing subtle splashes of melody and sombre atmosphere, in a manner which proves to be as hypnotic as it is heavy.

Make no mistake about it, Breaching is one hell of an album, and Hundred Year Old Man are definitely a band to keep an eye on. 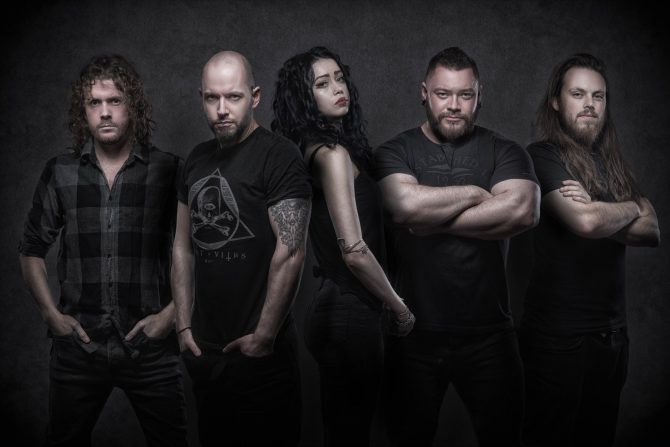 MASK OF JUDAS – THE MESMERIST

Genre descriptors are funny things. They’re often as problematic as they are helpful. Particularly when the press release which accompanies your album seems, at best, mildly confused or, at worst, wilfully disingenuous.

Case in point, the debut album by Mask of Judas is described in their PR blurb as “Progressive yet soulful Death Metal”. And while the music contained therein is, at different points, both indulgently proggy and sublimely soulful, it’s definitely not Death Metal by any stretch of the imagination, and to call it so sets up some false expectations which can only work against the band in the long run.

Despite this descriptive faux pas the album itself is still an impressive (if flawed) debut which, at its very best, puts me in mind of a djentier version of Protest The Hero, possessing a similar flair for extravagantly technical fretwork and soaring melody, as well as a booming bottom-end which speaks to a significant Periphery and/or Meshuggah influence.

The real icing on the cake, however, comes from the spellbinding clean vocals of frontwoman Jo Challen, whose electrifying voice – poppy yet passionate, soul-stirring yet shamelessly catchy – is the band’s not-so-secret weapon, not to mention a real scene-stealer.

But while I’ve seen this album being hailed as “a masterpiece” in certain other places (because apparently that’s just a word we throw around these days), it would be remiss of me not to point out a few nagging issues which prevent The Mesmerist from reaching its full potential.

For one thing, some songs are definitely stronger and more memorable than others. They’re all impeccably put together, no doubt about it, but they don’t all stick in the memory to the same extent, and occasionally some of those bouncy, zeitgeist-friendly riffs just start to blend into one.

More importantly, however, as good as Challen’s clean vocals are, her harsh vocals sometimes come across as a little forced and one-dimensional by comparison, particularly in the album’s first half.

That being said, though, they generally get the job done, and when she does properly cut loose – such as during “Brand New Conquest” or “Siren” – you can hear some welcome bite and belligerence enter the mix, which contrasts nicely with her mesmerising singing voice.

All criticism aside, though, there’s a lot to love here, as tracks like “Alive” and “Gravity” (two of the album’s finest cuts, as well as ones where Challen’s harsh vocals are used more to support her cleans, rather than the other way around) demonstrate that MoJ have all the tools to be a major player going forwards, and I fully expect even bigger, and better, things from this band in the future. 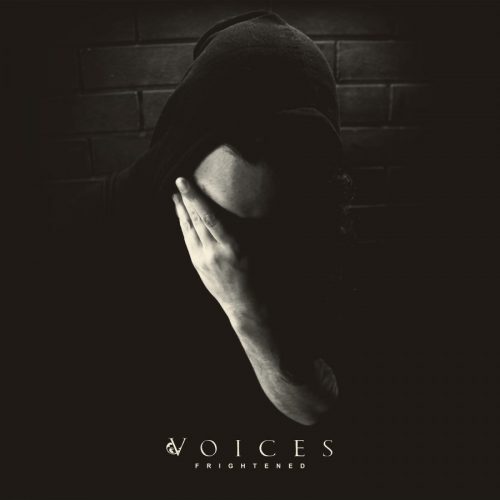 So I have a quick confession to make before we go any further. I am one of those people who felt Voices’ previous album was a little overrated. Don’t get me wrong, I still think it’s a great album for the most part, but the sheer amount of hype and wild praise it received was, quite frankly, a little bit excessive (and, on occasion, slightly unfathomable).

And, who knows, maybe the band themselves felt the same way, as, for their long-awaited follow-up to London the quartet have basically ditched almost all of that album’s more extreme elements in favour of a sound which is inarguably more accessible, but ultimately just as dark and devious as before.

That’s not to say they’ve completely abandoned their more metallic trappings, as several of these songs – such as the off-kilter “Dead Feelings” and the unsettling “Home Movies” – showcase a subdued chaotic undercurrent seemingly purposefully designed to jar and jangle the nerves, but the majority of Frightened finds Voices pursuing a sound which owes a lot more to proggy Post-Punk and avant-garde Art Rock than it does to Death or Black Metal, and there’s nothing here on the same extremist scale as “Music for the Recently Bereaved” or the bombastic “Vicarious Lover”.

But while this might be conceived as a bit of a slap in the face by some, it’s worth pointing out that it’s not the first time they’ve experimented with this sort of sonic strangeness (remember “The Antidote” and “Hourglass”?), nor are they the first band to throw a wrench into the works purely because they felt the need to blow everything up in order to express themselves in a new way.

As a matter of fact, the metamorphosis which has taken place on Frightened is somewhat reminiscent of the way in which Code embraced their own proggy eccentricity on mut, as well as the fearless unorthodoxy of Virus circa The Black Flux, as is immediately noticeable during the opening combo of “Unknown”, “Rabbits Curse”, and “Evaporated”.

There’s also a lot of Last Fair Deal Gone Down-era Katatonia in the mix (at least to these ears), particularly during songs like “Manipulator” and “Funeral Day”, which are two of the album’s many highlights.

It doesn’t always work out for the best (the hollow grandiosity of closer “Footsteps” rings a little false, and sounds a bit too much like an anaemic imitation of latter-day Anathema), but when it does work, the results are astonishingly good, and well worth embracing if you’re ever in the mood for a little walk on the weird side of the street.